In this photo illustration, an ‘Impossible Whopper’ sits on a table at a Burger King restaurant on April 1, 2019 in Richmond Heights, Missouri. Burger King announced on Monday that it is testing out Impossible Whoppers, made with plant-based patties from Impossible Foods, in 59 locations in and around St. Louis area.

Data reveals that the introduction of Burger King’s meat-alternative patties increased traffic at the global fast-food franchise both during city-specific testing as well as after a nationwide rollout.

Researchers at Barclays studied the ratio of traffic share between Burger King restaurants in St. Louis and locations nationwide during the company’s trial phase of its new Impossible Whopper, a plant-based burger produced by Impossible Foods. Burger King began testing the new burgers exclusively at St. Louis locations in April.

The analysis showed traffic grew about 18% in the St. Louis locations versus no comparable gains for McDonald’s St. Louis restaurants or Burger King’s Kansas City locations.

“Since mid-July, we have seen BK gain traffic nationally relative to McDonald’s with the gains accelerating as we approached the nationwide launch of the Impossible Whopper,” the Barclays team wrote. Our research suggests that, “following the national launch of the Impossible Whopper, BK stores have seen an ~2 percentage point traffic lift nationally, relative to McDonald’s.” 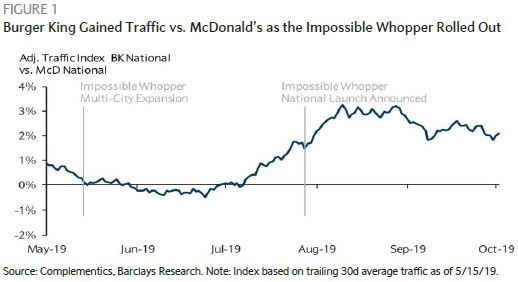 The success of the meat-less Impossible Whopper have kept investor expectations reasonable and put Burger King on track for a 3.5% bump in U.S. same-store sales, the Barclays team added.

Burger King is a subsidiary of Canadian multinational fast food holding company, Restaurant Brands International. The stock was last seen trading at CA$91.59; the Barclays team sees the stock rallying 23% to $86, or about CA$113, over the next 12 months.

And their forecast success, the Barclays team wrote, is in part thanks to the demand for Impossible Whoppers.

Burger King launched the meatless burger nationwide in August, following the lead of Carl’s Jr. and White Castle, and after the isolated trial in St. Louis. McDonald’s, the globe’s largest burger chain, in September announced testing of the P.L.T., a plant-based burger, in Canada.

“On Burger King’s Impossible Whopper, investors have two primary questions,” the researchers wrote: How big did it buoy same-store sales? And is the boost sustainable? “In our view, the evidence supports the fact that the Impossible Whopper can draw traffic for BK,” the team wrote.