If misery loves company, then Aurora Cannabis (NYSE:ACB) shareholders are far from alone. While marijuana stocks like ACB were soaring earlier in the year, several marijuana-related headwinds and dulling hype have since sent many of these stocks downward. But if new investors want to brave the risk and allow ACB stock to grow in their portfolio, a risk-adjusted long position in shares needs to be properly cultivated first.

From the largest producer Canopy Growth (NYSE:CGC) to a smaller and promising niche player like New Age Beverages (NASDAQ:NBEV), a risk-off attitude toward this emerging-but-still-very-dicey market has been pervasive.

And Aurora stock has proven no exception to this pain.

It’s also true that the loss in ACB stock’s value hasn’t been without justifiable cause either. Last month’s worse-than-forecast quarterly results failed to deliver anything other than more supportive ammo for ACB bears. That’s because it’s hard for Aurora to be a winner right now. Given the difficult regulatory environment for the cannabis market — one that also increasingly faces oversupply problems — rising costs and lower margins, it’s no wonder Aurora hasn’t been able to stand up straight lately.

Adding more pressure to Aurora Cannabis stock is the fact that one of its peers, Hexo (NYSE:HEXO), recently announced an revenue warning and guidance retraction and continued push-back toward cannabis due to vaping fatalities. All of these problems could reflect future struggles for ACB’s business as well.

And, looking at the stock chart below, we can clearly see the toll this decisively bearish sentiment has taken on Aurora stock. 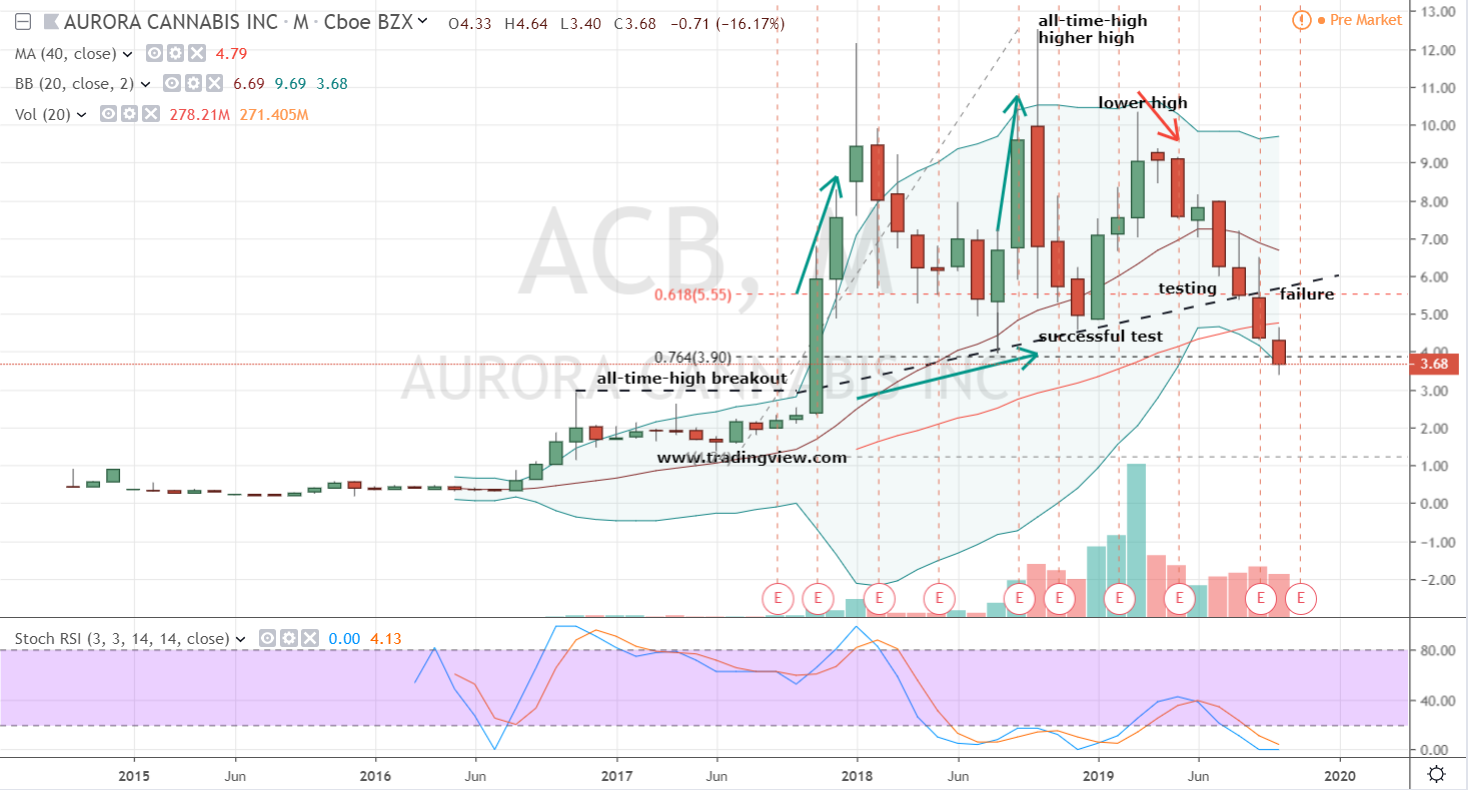 But before we jump on the bearish train, it’s important to take a closer look at the bigger picture in Aurora Cannabis.

Although I’ve said it before, it’s still very relevant to ACB stock and prospective ACB investors: Most of the market’s greatest and most legendary investments, from Coca-Cola (NYSE:KO) to Apple (NASDAQ:AAPL) or Amazon (NASDAQ:AMZN), have had their own periods of overenthusiastic sentiment eventually getting the best of investors.

To that end, Aurora stock can’t just be written off. But buying shares today isn’t advised.

Right now, ACB stock is controlled by bearish operators. Following September’s post-earnings breakdown of the 62% level and trendline support, shares have cratered by roughly 35%. Most recently, the pressure has forced a combined failure of 2018’s bottom and 76% support. And as bad as that is, it could get a good deal worse.

There’s little to suggest Aurora Cannabis stock price’s bearish trend can’t continue toward the 2017 low of $1.38. This marks the Fibonacci cycle low detailed on the monthly chart above. It’s an important level to consider. Specifically, it’s the bottom for shares following Wall Street’s enthusiastic introduction to ACB stock in late 2016.

Ultimately, there’s no reason to start cherry picking for a bottom in ACB. Even an accumulation strategy could prove very painful if shares continue to trend lower toward a full 100% retracement.

It’s simply too early to know what will happen to Aurora Cannabis stock here.

Therefore, my recommendation is to allow a confirmed candlestick reversal pattern and bullish stochastics crossover to be in place on the monthly chart before considering a purchase of ACB stock. In my view, this approach won’t buy the absolute bottom.

More important, the approach stands a much stronger chance of cultivating longer-term profits if history repeats itself or simply rhymes in a good way.

Disclosure: Investment accounts under Christopher Tyler’s management do not currently own positions in any securities mentioned in this article. The information offered is based upon Christopher Tyler’s observations and strictly intended for educational purposes only; the use of which is the responsibility of the individual. For additional options-based strategies and related musings, follow Chris on Twitter @Options_CAT and StockTwits.