Shares of Biogen soared nearly 40% on Tuesday after the drug maker said it is seeking regulatory approval for its Alzheimer’s drug, aducanumab.

“It would be the biggest drug ever,” said CNBC’s Jim Cramer on “Squawk on the Street.” 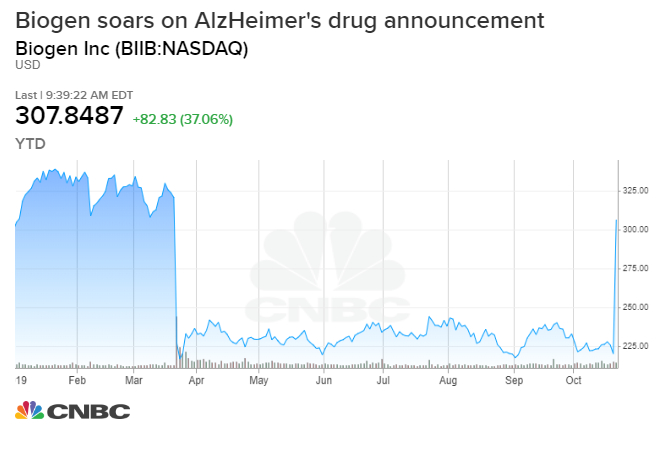 The announcement comes just months after Biogen discontinued clinical studies for the same drug following a data analysis that did not achieve its objective. Shares of Biogen sold off in March after stopping the trials as Wall Street was expecting this drug to be Biogen’s next big source of revenue.

Biogen erased its entire 25% year-to-date decline when it said a new analysis of a larger dataset showed that aducanumab “reduced clinical decline in patients with early Alzheimer’s disease,” the company said in a release. Patients who received the drug “experienced significant benefits on measures of cognition and function such as memory, orientation, and language.”

Biogen plans to file for approval with the FDA in early 2020.

“With such a devastating disease that affects tens of millions worldwide, today’s announcement is truly heartening in the fight against Alzheimer’s,” said Michel Vounatsos, Chief Executive Officer at Biogen in the release. “We are hopeful about the prospect of offering patients the first therapy to reduce the clinical decline of Alzheimer’s disease and the potential implication of these results for similar approaches targeting amyloid beta.”

“You have the number one drug of all time, potentially,” said Cramer.

While Alzheimer’s effects about 50 million people globally, there are no approved therapies to slow or reverse the decline of the disease.

“The whole concept of senior living will change,” added Cramer. “You know whose going to take this drug?” asked Cramer. “Everyone.”

—Reuters contributed to this report.