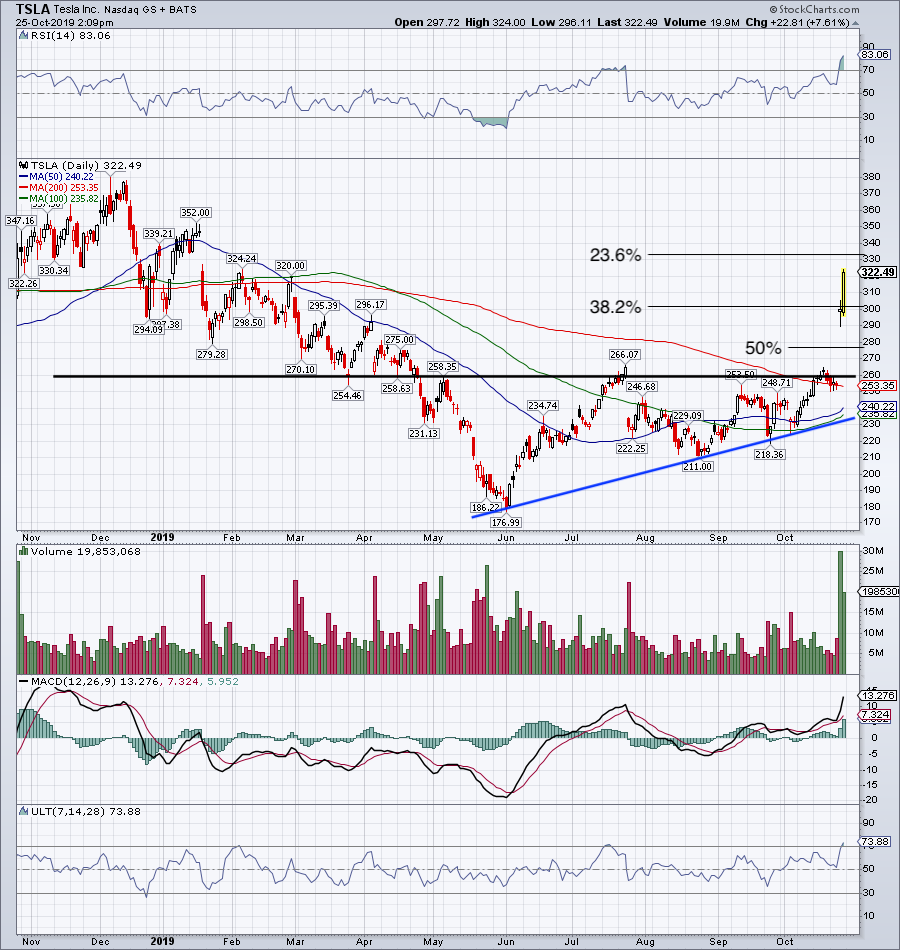 Markets caught another boost as investors continue to chew through big-time earnings reports. Let’s look at a few top stock trades that caught our eye heading into next week.

What a strong follow-through day in Tesla (NASDAQ:TSLA). Shares exploded higher, reclaiming the $300 level and 38.2% retracement. It set up for a raging red-to-green trade, one that we called out live on Twitter (NYSE:TWTR).

After two big days of gains, bulls are clearly back in control. However, staying in control is what matters here. See that TSLA shares maintain above Thursday’s low near $290.

Below could accelerate a move down to the 50% retracement near $278. A continued push higher could find resistance at the 23.6% retracement, which is up at $331.70. Over $300 should be viewed as bullish for the time being. 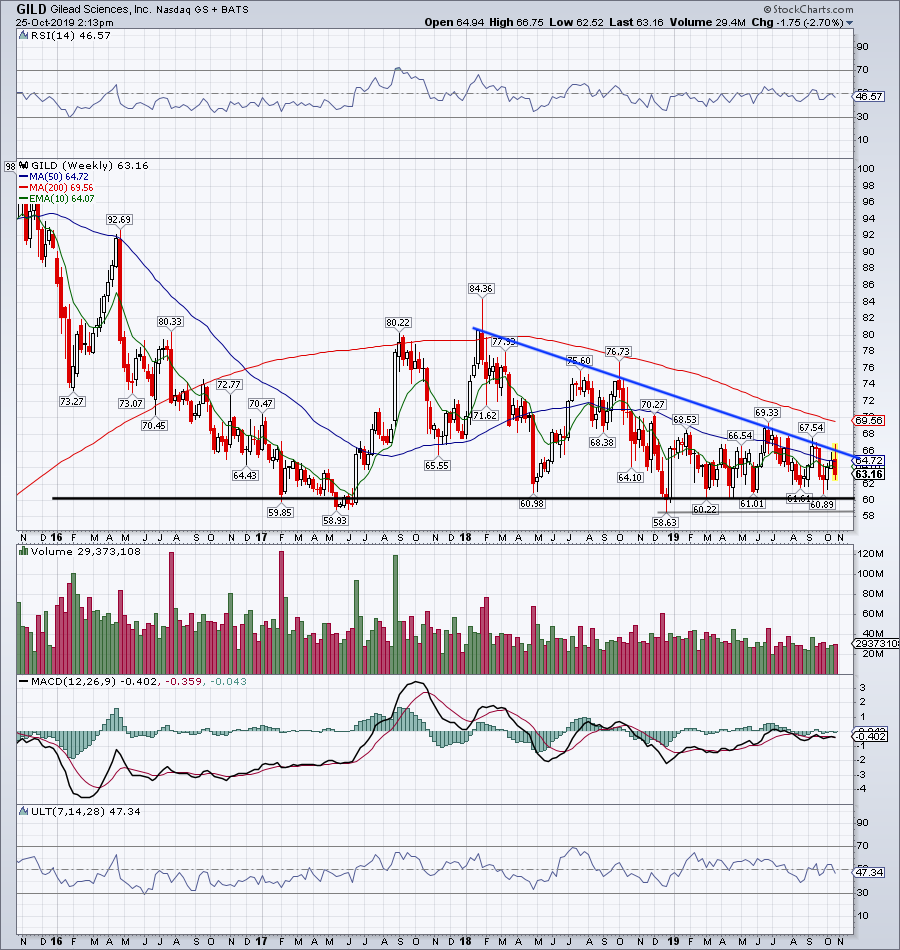 Gilead Sciences (NASDAQ:GILD) slipped slightly on the day after reporting earnings. While shares are holding up over resistance, the trend doesn’t look great.

Shares are being squeezed lower by downtrend resistance (blue line), while support near $60 continues to hold.

Should it break, look to see if GILD stock takes out the 2017 and 2018 lows near $58.63. Falling below that level could open the door to even lower prices. 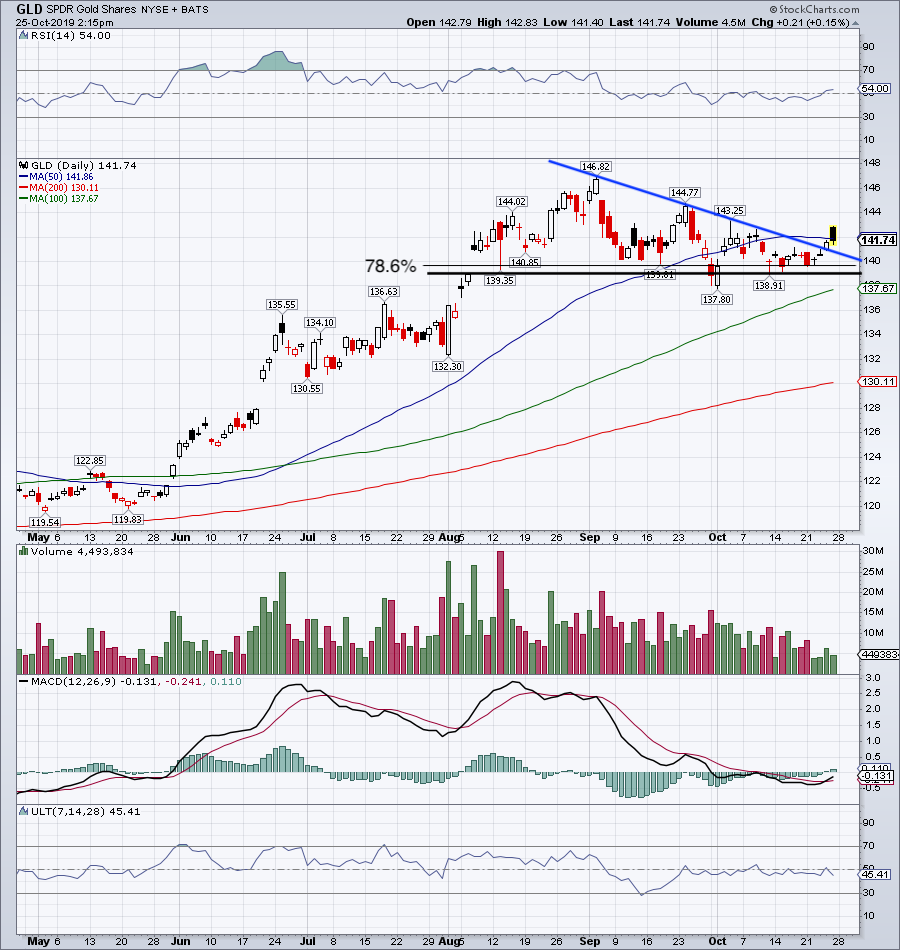 Gold has been in the spotlight over the past few months and ahead of the Federal Reserve meeting next week, it should be. On Thursday, the SPDR Gold ETF (NYSEARCA:GLD) technically broke out of its wedge pattern. On Friday, it gapped above the 50-day moving average but failed to hold its gains.

Is there an opportunity for bulls?

A move below $139 would signal that bulls were wrong about the trade. This approach puts a limited risk amount at play and allows traders to play for an upside move. Above $144 could put the $146.82 high in play.

While gold may be out of favor for the moment thanks to the rally in equities, it may find demand with the Fed expected to cut interest rates again on Wednesday.

That may pave the way to keeping the uptrend alive. 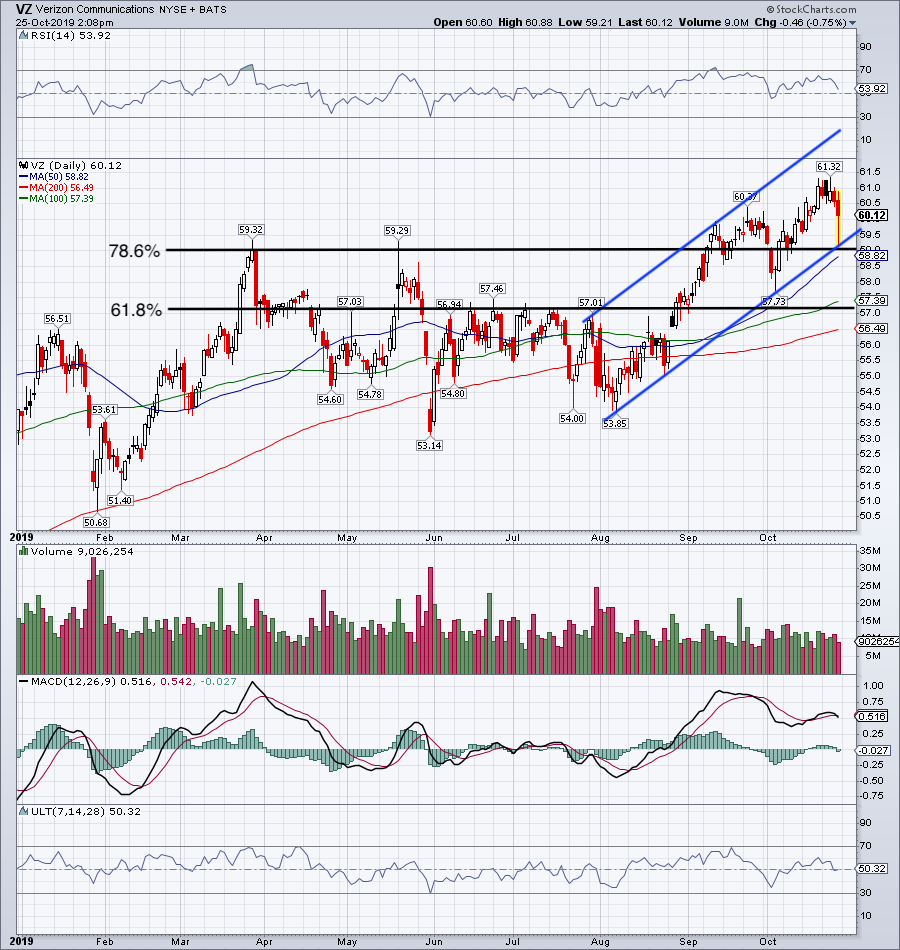 Verizon (NYSE:VZ) initially puked lower on Friday after reporting earnings. However, the telecom giant bounced off uptrend support and the 78.6% retracement.

Now let’s see if the stock can make new highs over $61.32. Below the 50-day moving average and traders may want to let VZ reset.

Is the setup simple? Yep, and those are the best kind. There’s no reason to overthink this one. Support held on Friday, which puts $61-plus on the table. Below the 50-day puts VZ below multiple support levels and proves that bulls are wrong, thus allowing them to stop out of the trade and look for better setups elsewhere.