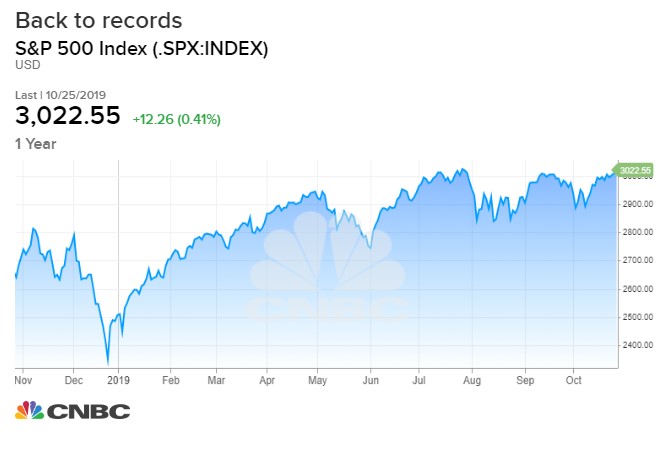 There’s one big word we are not hearing this earnings season.

The one word that is not being uttered on conference calls: recession.

The U.S. consumer — the engine of global growth — is still holding up, according to CEOs and CFOs who have spoken on their company conference calls in the last few weeks.

It’s one reason why the S&P 500 is poised to hit a record high on Monday, up more than 20% year to date and completing a rebound from an August sell-off.

Almost 200 companies in the S&P 500 have reported third-quarter earnings.

“Of the S&P 500 companies that have reported over the last month, just 32 mention recession on their calls,” said Nick Mazing of Sentieo.

And that — along with hopes for a trade deal breakthrough — is the major reason the S&P 500 is knocking on the door of a record high.

Here’s a sample of recent conference call comments on the prospects for a recession in 2020.

Harris Simmons, Zions Bancorp CEO: “We don’t see any indications of a broad-based recession on the horizon.”

Jack Barnes, CEO, People’s United Financial: “We feel that we are not on the verge of a recession.”

CFO Darren King, M&T Bank: “While sentiment about a potential recession is building, we’re not seeing or hearings signs of a slowdown.”

Richard Fairbank, Capital One CEO: “I think the U.S. economy and the U.S. consumer is in pretty good shape. Consumers are obviously benefiting from a strong labor market, rising wages and last year’s tax cuts, all of which are driving up disposable incomes.” He went on to note that delinquencies and charge-off rates are low, and payment rates are rising.

Visa Vice Chairman Vasant Prabhu: “From the numbers we reported for the last two quarters, you can see that growth trends of all our key business drivers, payments volumes, processed transaction and cross-border volume have been stable…[O]ur outlook assumes that the trend have been in place for the past couple of quarters, continue through fiscal year 2020.”

CEOs in other sectors are also expressing the same sentiment.

The consumer is holding up

Stuart Miller, Lennar CEO: “I know there is a lot of questions about upcoming potential recession and things like that. Our customers don’t seem to be viewing it that way. And I think that the housing market, in general, seems solid and strong and continuing to improve.”

Kurt Barton, CFO of Tractor Supply: “[W]e’re not seeing any indications at this point of any slowdown.”

Several companies, particularly industrials that sell in China, did use the “slowdown” word, though most seemed more optimistic about 2020.

Patrick McHale, CEO, Graco: “[T]he trade war and the slowdown in automotive in China is really putting some strain, I think, on industrial activity across the board over there.”

Michael Larsen, CFO, Illinois Tool Works: “We did see a modest slowdown, particularly on the capex side here in Q3. … [W]hen we look at the underlying activity in these businesses [food equipment and test and measurement] and the order rates, they’re actually looking pretty good heading into Q4. … The remaining segments are pretty stable.”

Donald Allan, CFO, Stanley Black & Decker: “[W]e’ve seen a slowdown start in the second quarter and continue to the third quarter, and likely will continue for at least a portion of the fourth quarter.”

What’s this all mean?

The economic narrative, he said, has shifted from “recession” earlier in the year to “slower but stable growth,” a far-less dire scenario: “We may have a lower trajectory of economic expansion, but certainly not a recession.”