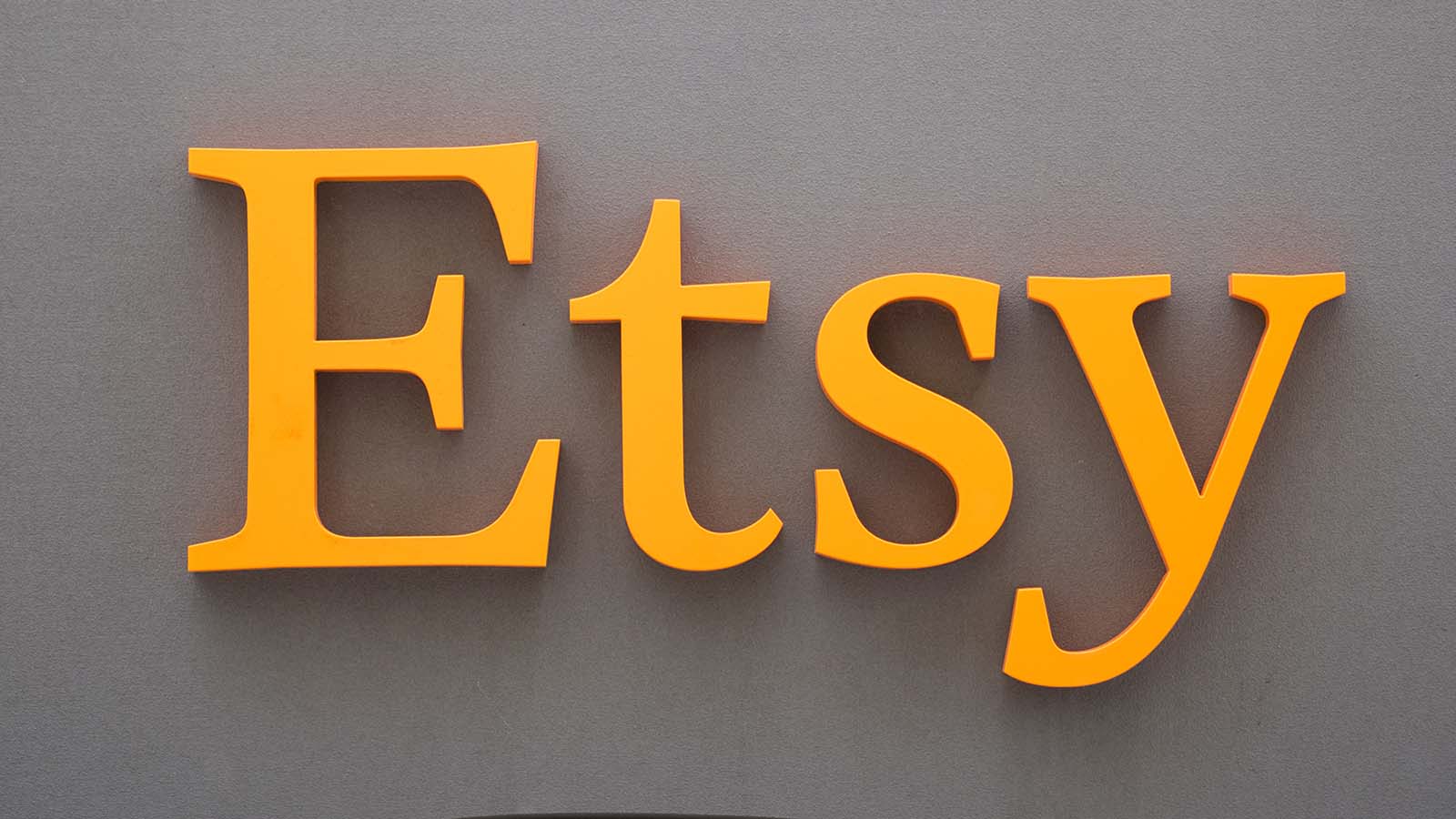 Shares of Etsy (NASDAQ:ETSY) plunged in late October after the specialty e-retailer reported mixed third-quarter numbers that included a lame fourth-quarter guide. The broad implication? The Etsy growth narrative is slowing, with the revenue growth trajectory flattening out and margins starting to come under pressure.

Heading into the print, ETSY stock was trading at nearly 54-times forward earnings. That multiple wasn’t priced for a growth slowdown. So, when the Q3 print implied that a slowdown was coming, Etsy stock reasonably tumbled. As of this writing, shares of ETSY are down more than 15%.

But, taking a step back, this sell-off in ETSY stock could turn into a golden buying opportunity.

There are three big reasons why the dip in Etsy earnings look compelling. First, the long-term growth fundamentals remain healthy and support the stock at levels closer to $50. Second, the optics surrounding the stock should improve once near-term acquisition-related noise passes. Third, the technicals imply that ETSY stock is plunging into oversold territory, and historically speaking, such plunges have been followed by big bounce-back rallies.

I think now may be the time to get bullish on Etsy stock.

The first big reason to like ETSY stock on the dip is that the fundamentals remain strong.

At its core, Etsy is a specialty e-retailer which has created an unrivaled ecosystem of online buyers and sellers in the arts, crafts, and other creative goods market. This is a relatively small market, so Etsy won’t ever get that big. But, Etsy dominates the online portion of the market, and dominance in an e-commerce niche means that Etsy will continue to grow with the secular growth e-retail market for the next several years.

That market projects as a 15%-plus grower into 2025, assuming Etsy continues to control its 0.15% market share. At the same time, margins should continue to improve with scale, since the costs of operating a website aren’t that big, and many of the input costs are relatively fixed.

Big picture: Etsy projects as a 15%-plus revenue grower into 2025, with upside margin drivers, and that should produce sustainable 20-25% profit growth. Assuming so, 2025 earnings per share could land around $3. Based on a consumer discretionary sector average 21-times forward earnings multiple and a 10% annual discount rate, that equates to a 2019 price target for ETSY stock of roughly $46.

Etsy Stock Optics Will Improve in 2020

The second big reason to like Etsy stock on the dip is that the optics surrounding the stock will improve in 2020.

Right now, ETSY stock is getting killed because: 1) the pace of revenue rate expansion is slowing, causing a material slowdown in revenue growth despite steady 20%-plus gross merchandise sales growth, and 2) margin expansion is similarly slowing, and adjusted EBITDA margins are expected to drop this year.

Both of these negative developments are almost exclusively the result of Etsy acquiring Reverb, an online music gear marketplace. Reverb has a materially lower revenue take rate than Etsy, as well as lower adjusted EBITDA margins. Consequently, while Reverb is boosting gross merchandise sales growth thanks to new sales volume, those new sales are happening at lower take rates and with lower margins. This is causing the slowdown in revenue growth and margin expansion rates.

Etsy is still in the early days of incorporating Reverb into its operations. In 2020, the company will likely do all it can to improve Reverb’s take rates and margins. As they do that, Etsy’s overall take rates and margins should improve. Improvement therein should breathe life back into ETSY stock.

The Technicals Are Favorable

The third big reason to like ETSY stock on the dip is because the technicals imply that a sizable rebound is just around the corner. 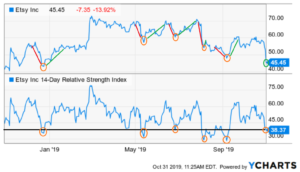 Specifically, the Relative Strength Index on Etsy stock has is rapidly plunging into oversold territory. As the attached chart illustrates, ETSY stock’s RSI has dropped into oversold territory five times over the past year. Each time, the stock reversed course sharply, and turned a big sell-off into a big rally.

Given the favorable fundamental and optical support here, it is fairly likely that ETSY stock stages a similar technical reversal this time it plunges into oversold territory.

Etsy stock plunged on mixed third-quarter earnings which simply weren’t good enough to support the stock at a $50-plus price tag. But, while the numbers weren’t great, they were still pretty good — meaning if current weakness drags shares down to $40, then this sell-off will turn into a great buying opportunity.

As of this writing, Luke Lango did not hold a position in any of the aforementioned securities, but may initiate a long position in ETSY within the next 72 hours.