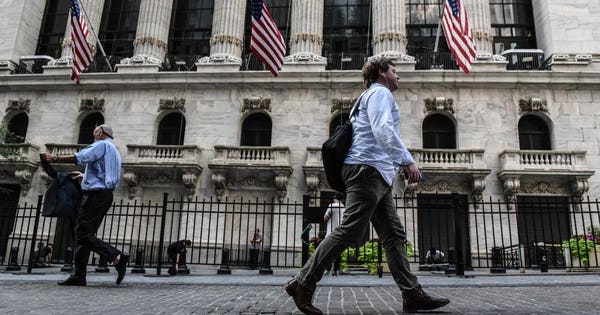 Is this thing on? Many traders were likely asking that question during a relatively quiet summer day on Wall Street yesterday. Such light trading should come as no surprise, though. For many, the release of the July payroll number on that first Friday in August is the only thing standing between them and a summer holiday.

But this is probably a market to keep an eye on. Several recurring themes have the potential to help move the market at any given point. Tariff talk and other trade tensions are still in the works. The U.S. dollar inched higher yesterday only to fall back this morning (see figure 1 below), and crude oil continues to chop around the $70 mark. Later this week we get a fresh read on two highly-watched inflation reports— first the Producer Price Index (PPI) Thursday, followed by the Consumer Price Index (CPI) Friday. Plus, though the bulk of earnings season is behind us, there are still some biggies yet to report, such as several big-box retailers, which can help set the tone for consumer spending.

This morning, stock futures were pointing to a higher open for the three major indices. It may be a case of investors focusing on momentum from a generally solid earnings season and letting trade talk simmer on the backburner.

The three major U.S. indices ended in the green on Monday, and volumes were below average. This week is also light on economic data to provide the market with clear direction, leaving investors to continue digesting last week’s data, which included an underwhelming jobs report, and to focus on the continued earnings season.

The financial sector on Monday appeared to get a boost from Warren Buffett’s Berkshire Hathaway after it reported better-than-expected quarterly profit. Beyond the financial sector, the conglomerate is involved in a wide range of businesses, so Berkshire Hathaway can be seen as a bit of a bellwether for the wider economy, which according to recent data is humming right along.

The financial sector may have also gotten a boost on comments from JPMorgan Chase CEO Jamie Dimon that the benchmark 10-year Treasury yield could hit 5% or higher. That could be a boon for banks by boosting the margin on the interest they pay on deposits versus what they earn on loans.

But it could also dent corporate borrowing costs, a scenario that has led some on Wall Street to think rising rates could end up denting the economy. As of Monday, that yield was below 3%, a psychological level it has cleared but has had trouble staying above. And it remains to be seen whether the wider market sees that 5% mark in the near future.

Also on Monday, Facebook gained more than 4% after a Wall Street Journal report said the social media giant has talked with major U.S. banks as Facebook seeks to be a platform where people exchange goods and services. If Facebook is able to successfully move into that arena, it seems that it would add competition for Amazon, further helping to tilt the consumer experience toward online shopping and away from traditional brick-and-mortar stores.

After the bell today, Snapchat parent Snap is scheduled to report earnings. Investors may want to consider paying attention to Snap’s results on advertising and user numbers.

The Walt Disney Co. is scheduled to report fiscal third-quarter earnings after market close today. Between the company’s new streaming services and its pending acquisition of 21st Century Fox, it’s been a busy quarter.

Jobs and the Fed: As the market digests the latest jobs report, one question may be how the numbers could affect the Fed’s thinking. Although Friday’s jobs report came in softer than expected, Massud Ghaussy, Nasdaq IR Intelligence senior analyst, doesn’t think that will affect the Federal Reserve’s stance on interest rates. In written commentary, he noted that it’s easier for the Fed to raise rates because the price index for core personal consumption expenditures, which is the central bank’s preferred inflation gauge, is coming in line with expectations. “The job market cooled off from last month, but we continue to see modest growth and the tightening of labor markets,” Ghaussy noted. “It is highly unlikely that this report will influence the Fed’s current rate hike trajectory, as they have been hawkish lately on the state of the economy, and the market has priced in a fourth rate hike.”

More on Jobs: Even though the jobs number came in below expectations on Friday, is still showed that the Goldilocks scenario for the U.S. economy continued. Market watchers have been using that phrase to describe an economy that is expanding nicely but where inflation isn’t rising at an alarming pace. In other words, it’s not too hot and not too cold. Because wages are a key influencer of inflation, many have been watching the average hourly earnings component of jobs reports. Year-over-year wage growth turned out to be the same in July as in June at 2.7%. That marked the 110th straight month where wages grew less than 3%, even as the economy added jobs for the 94th month in a row, according to the Washington Post. Both streaks are records, the Post said. With wages growing at less than 3% even as the recent GDP reading showed annualized growth of 4.1%, it looks like the Goldilocks scenario continues be with us.

Expansion Seen Continuing: By the end of next year, if the Fed hikes rates five more times, the midpoint of the Fed funds target rate will be above 3%, according to investment research firm CFRA. The firm doesn’t expect the rate-tightening program to cause the current economic expansion to stop anytime soon. CFRA notes that the Fed has telegraphed higher rates to the market for some time. Also, historically, the Fed’s key short term interest rate has averaged 1.3 percentage-points above the year-on-year change in the headline consumer price index (CPI) since 1948 and core CPI since 1958. With the current Fed funds rate nearly 175 basis points below what a typical Fed funds rate of 3.6% would be, monetary policy “remains in a stimulative, net-negative real rate environment (rates are below the rate of inflation) that will reach neutral after two more hikes but will not get back to ‘normal’ for several years,” CFRA said.