We had new all-time highs in the stock market today. On Monday, the S&P 500 hit another new high, just like it did in four out of five sessions last week.

Last week was interesting though. We had a better-than-expected jobs report on Friday, an interest rate cut from the Federal Reserve on Wednesday and some of the largest companies in the market reporting their quarterly results.

While this week is still a big one in terms of earnings, we are clearly lacking a few catalysts compared to last week. The question now becomes, what happens to the stock market while investors digest these big gains?

Indices may consolidate those gains either through price or through time, meaning a pullback for the former or sideways chopping action for the latter. Indices could also continue higher from here. While short-term sentiment is getting overly bullish and while the charts show an overbought condition developing, it doesn’t mean stocks can’t go higher.

If that’s the case though, be prudent about the advance. 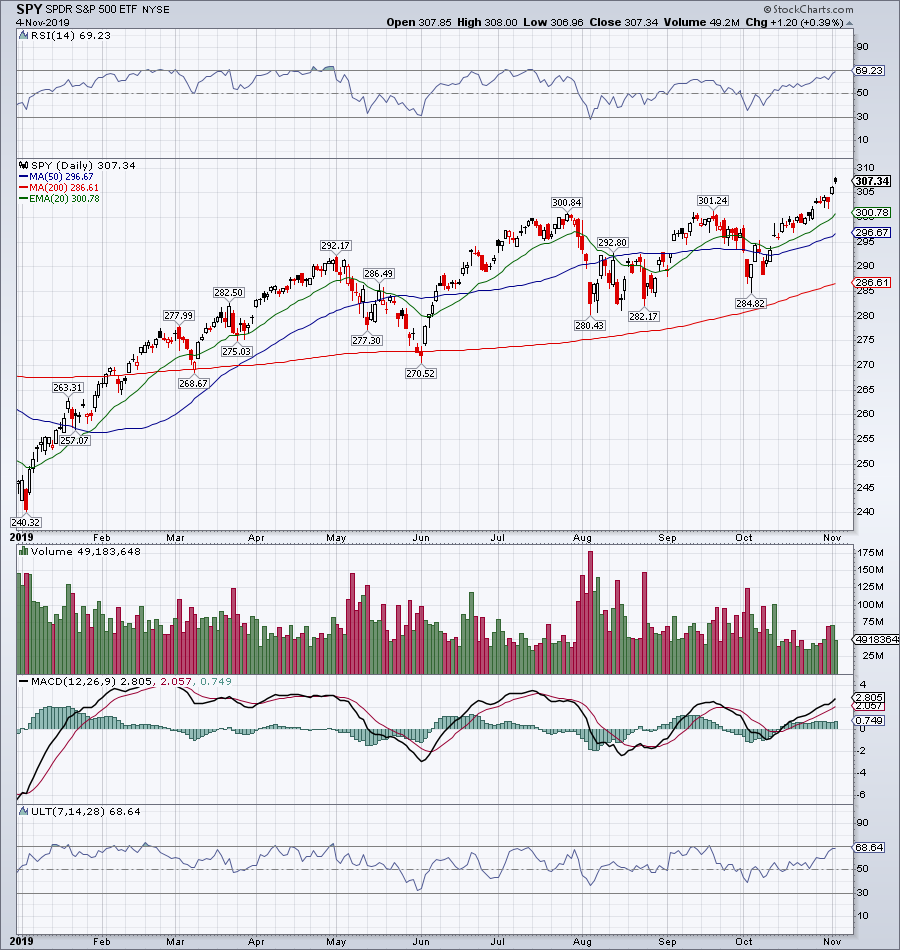 Under Armour (NYSE:UA, NYSE:UAA) and McDonald’s (NYSE:MCD) were the two big focuses on Monday.

Shares of the former plunged about 19% on the day, but it wasn’t Under Armour’s quarterly report driving the losses. UAA reported earnings of 23 cents per share, 4 cents more than analysts were expecting. While revenue of $1.43 billion eked past estimates, it declined 70 basis points year-over-year. Further, management cut its revenue growth forecast to 2% for the year, down from 3%-4%.

That stuff is almost pointless though when investors realize the big-ticket item from the quarter: two ongoing accounting probes.

Under Armour is having its accounting practices scrutinized by both the Department of Justice and the Securities and Exchange Commission. For many investors, accounting inquiries equal “sell,” and we’re seeing that play out on Monday.

As for McDonald’s, the stock slipped 2.7% on news that CEO Steve Easterbrook has been dismissed from the company. The man credited with much of McDonald’s revival was shown the door after he had a consensual relationship with an employee. Easterbrook, who also served as the company’s president, will also exit his role on the board of directors.

Bitcoin prices racing to $20,000 in late 2017 were the result of a single participant manipulating the price, according to reports. Approximately half of the asset’s gains were a result of this manipulation, which operated from a single account at Bitfinex. The authors of the report claim that Bitfinex execs likely knew of or aided the scheme as well.

Berkshire Hathaway (NYSE:BRK.A, NYSE:BRK.B) hit its highest level since May, after the firm reported its third-quarter earnings over the weekend. The company now holds $128 billion in cash and short-term Treasury bills, and actually bought back $700 million worth of stock in the quarter. In all, Berkshire reported record Q3 operating earnings of $7.9 billion, up 14% year-over-year.

Heard on the Street

Given the news with McDonald’s, it’s no surprise that the company drew the attention of analysts. Piper Jaffray cut the stock to “neutral” from “overweight,” and lowered their price target from $224 to $195. On the flip side, Barclays kept its “overweight” rating and $225 price target, arguing that the CEO change is due to personal conduct, not an operational issue.

Nomura analysts cut their rating on Verizon (NYSE:VZ) to “neutral” from “buy.” The also gave a slight cut to their price target, from $67 to $65. Conversely, UBS bumped their price target for AT&T (NYSE:T), from $38 up to $42. T stock still finished lower by 0.2% on the day, although it was better than Verizon’s 0.8% fall.

Finally, Marvell Technologies (NASDAQ:MRVL) caught a huge boost Monday, finishing higher by 6.6%. The rally comes after an upgrade from Wells Fargo to “outperform” from “market perform.” The analyst also upped their price target to $32 from $25, while semiconductor stocks continue to surge higher.