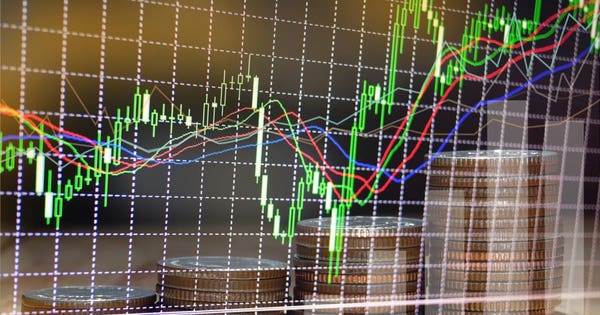 I’m just talking about the direction without considering what the stories about the fundamentals are.

Here’s the chart of the daily high, low and closing of the interest rate on the  U.S. Treasury 10-year note, an important benchmark for judging interest rate movement:

The main thing here is that rates are higher now then they were at the beginning of the year. They’ve gone from 2.35 to 2.93, a decent sized move if you’re dealing in the interest rate world these days. A case could be made that some kind of head-and-shoulders formation is being created. That might be confirmed if the rate level drops below the uptrend angle, shown here as the red dotted line. Right now, though, this price chart shows that the direction is upward.

The uptrend that began in mid-2016 continues. The rate was below 1.35 back then and now it’s up to above 2.9. It hasn’t exactly been straight up from that point to this — that move from November, 2016 (when Donald Trump was elected) to December, 2016 had a straight up quality and then re-traced a good part of the move over the next 9 months. Most importantly, the rate today remains above the red dotted uptrend line and above the Ichimoku cloud.

And here is the monthly price chart:

It is clear from this chart that the trend in interest rates had been downward from 2007 until the end of 2017, but then something changed and rates have broken above the longer-term downtrend line. I would call this a significant development. We’ve gone higher recently than the 2014 peak.  That 2007 peak was at 5.2 — is that where we’re now headed? I don’t know, it remains to be seen, for sure.

Here’s the weekly chart of the “continuous contract” for light crude oil:

The uptrend here is unmistakable from February, 2016 to the present. Lots of weekly ups and downs can be seen but it’s clear what the trend is.

Here’s the monthly chart for oil:

You can see the monthly downtrend line that connects the 2008 peak of up near 150 to lower 2013 and 2014 peaks. Now that the monthly oil price has made it above the Ichimoku cloud, will the next target be that red dotted downtrend line? Stay tuned.

I do not hold positions in these investments. No recommendations are made one way or the other.  If you’re an investor, you’d want to look much deeper into each of these situations. You can lose money trading or investing in stocks. Always do your own independent research, due diligence and seek professional advice from a licensed investment advisor.