U.S. stock futures are pointing toward a higher open as optimism continues buoying stocks to record highs. The lack of negative headlines surrounding the U.S.-China trade war is boosting morale, but so too are the Federal Reserve’s recent rate cut and seasonal patterns that support equities into the holiday season.

Against this backdrop, futures on the Dow Jones Industrial Average are up 0.35% and S&P 500 futures are higher by 0.26%. Nasdaq Composite futures have added 0.29%.

The flurry of fresh highs is spurring call volume, which jumped to just shy of 26 million contracts on Monday. Puts, meanwhile, remain only slightly above average at 17 million contracts. The wide gap between calls and puts persisted at the CBOE Volatility Index (VIX) with the single-session equity put/call volume ratio only ticking up slightly from its 2019 low to 0.54. At the same time, the 10-day moving average continued its descent by falling beneath 0.60 for the first time since mid-September. 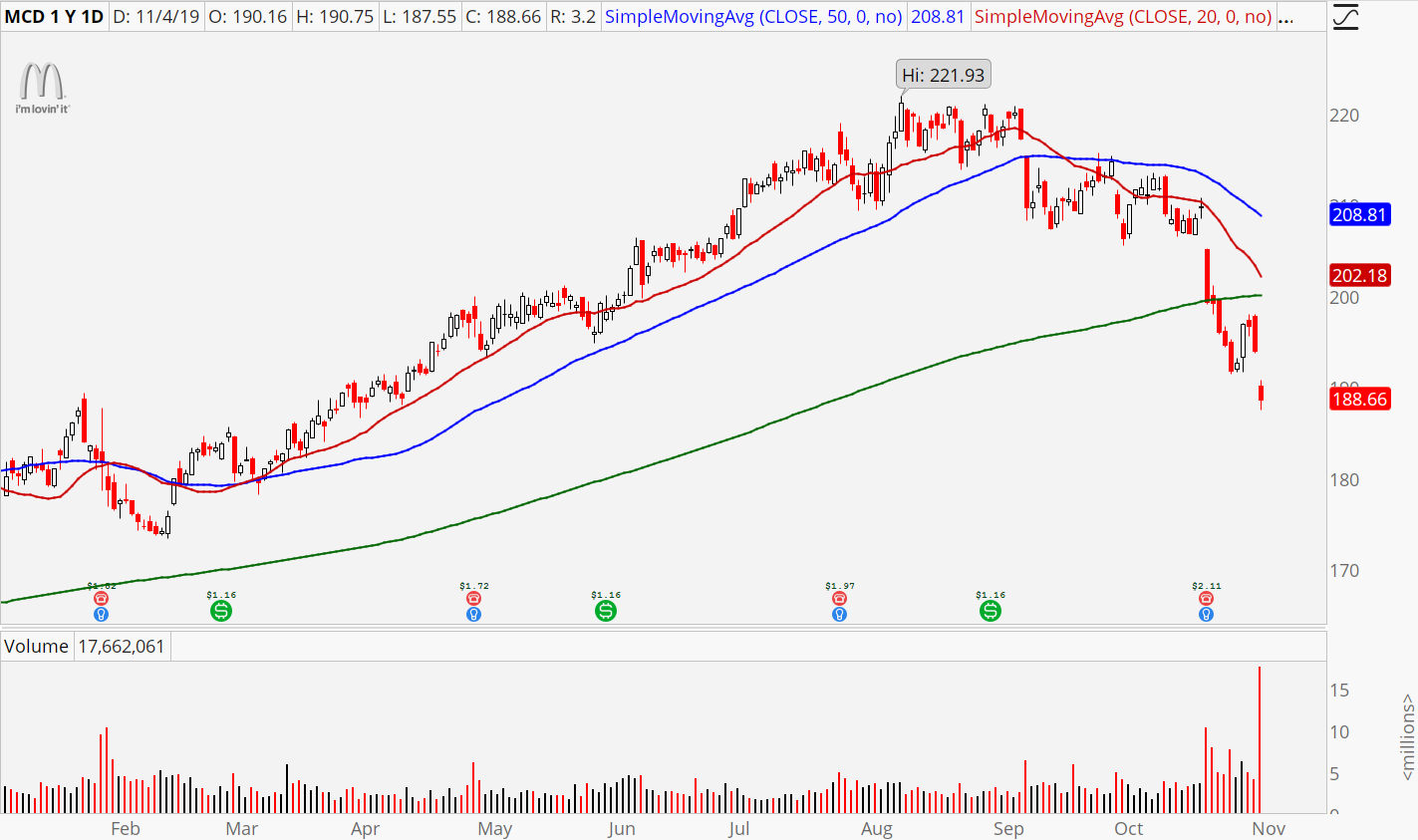 Disappointing earnings have been sinking McDonald’s shares, but the situation just got worse. On Sunday, the ubiquitous restaurant chain announced it fired its CEO, Steve Easterbrook, saying that “he violated company policy and demonstrated poor judgment involving a recent consensual relationship with an employee.”

The displeasure of investors was on full display, driving the stock down 2.7% to a six-month low. Volume exploded to its highest level since 2015, with 17.7 million shares circling the tables. Since peaking at $221.93 in August, MCD has fallen 15%, breaking every major moving average along the way.

What’s particularly unfortunate is the stock’s downfall is occurring while the rest of the market is flying to new records day after day. The relative weakness is extreme. That said, I don’t suggest piling into new bearish trades here. MCD is way oversold making this a poor risk-reward entry for new bearish trades. If anything, I’d look at selling December bull puts if it gets even more extended. That will position you to profit from a rebound.

On the options trading front, calls outpaced puts by a slim margin. Activity swelled to 544% of the average daily volume, with 187,659 total contracts traded. Calls accounted for 52% of the session’s sum.

Implied volatility jumped to 18%, landing it at the 22nd percentile of its one-year range. I’d prefer to see a bit more fear before selling bull puts. The compensation for the risk isn’t that tempting yet. 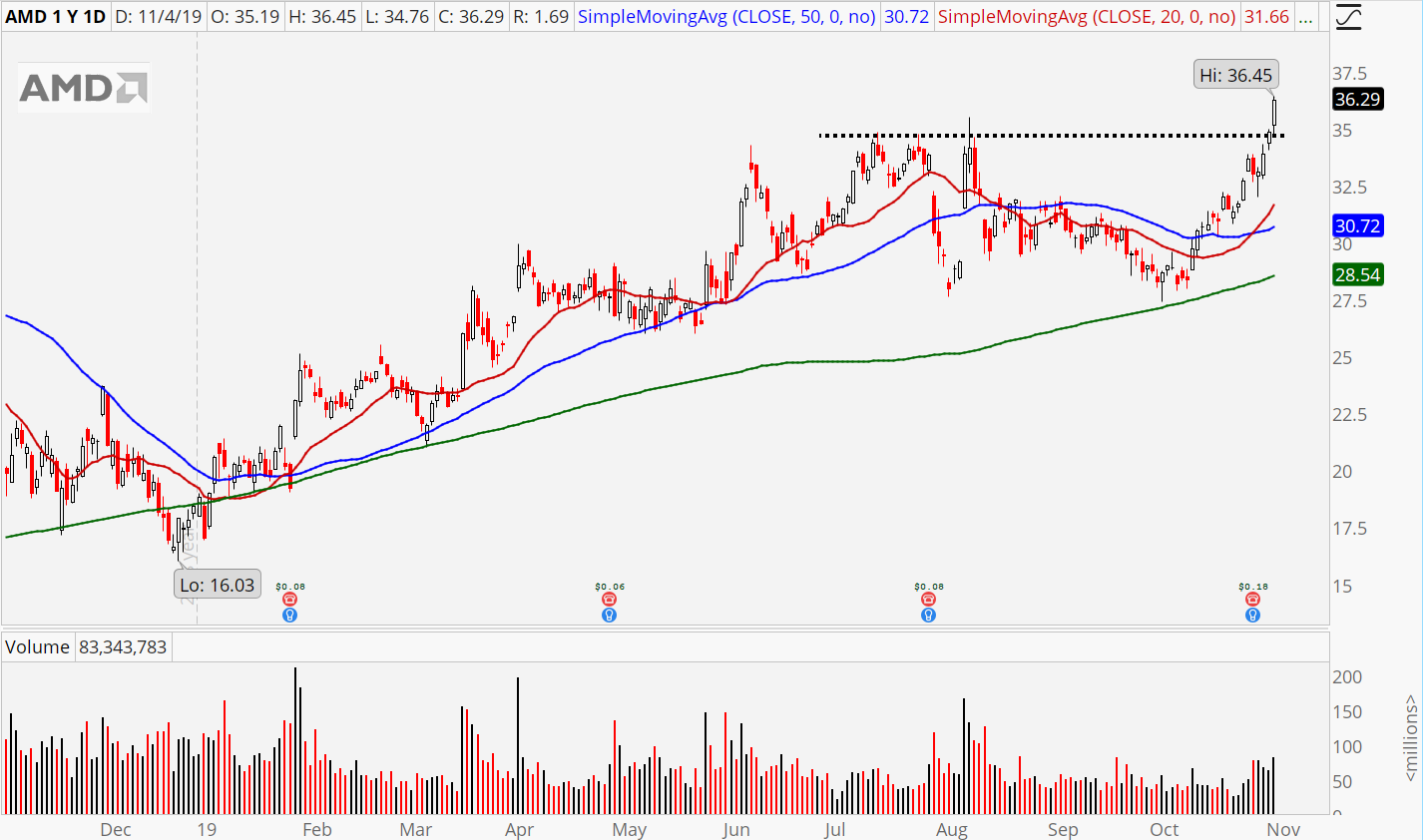 Semiconductors have been leading the charge in the technology sector. And buyers are now binging on Advanced Micro Devices. After its earnings report was found adequate to support AMD stock’s recent rise, bulls swarmed to push it to a fresh 13-year high.

The 20-day is curling higher faster than the 50-day, reflecting a strong momentum surge. Really, the only thing that might give buyers pause are the overbought pressures now starting to mount. AMD is up 33% in the past month alone so some backing and filling may be in order to digest the gains. It would certainly create a more compelling entry than chasing after such a rapid run.

On the options trading front, Monday’s breakout boosted call trading. Total activity jumped to 142% of the average daily volume, with 405,935 contracts traded. 68% of the trading came from call options alone.

Implied volatility is starting to pick up after its post-earnings crush but still lies at a lowly 42% or only the 4th percentile of its one-year range. Premiums are baking in daily moves of 96 cents or 2.6%. 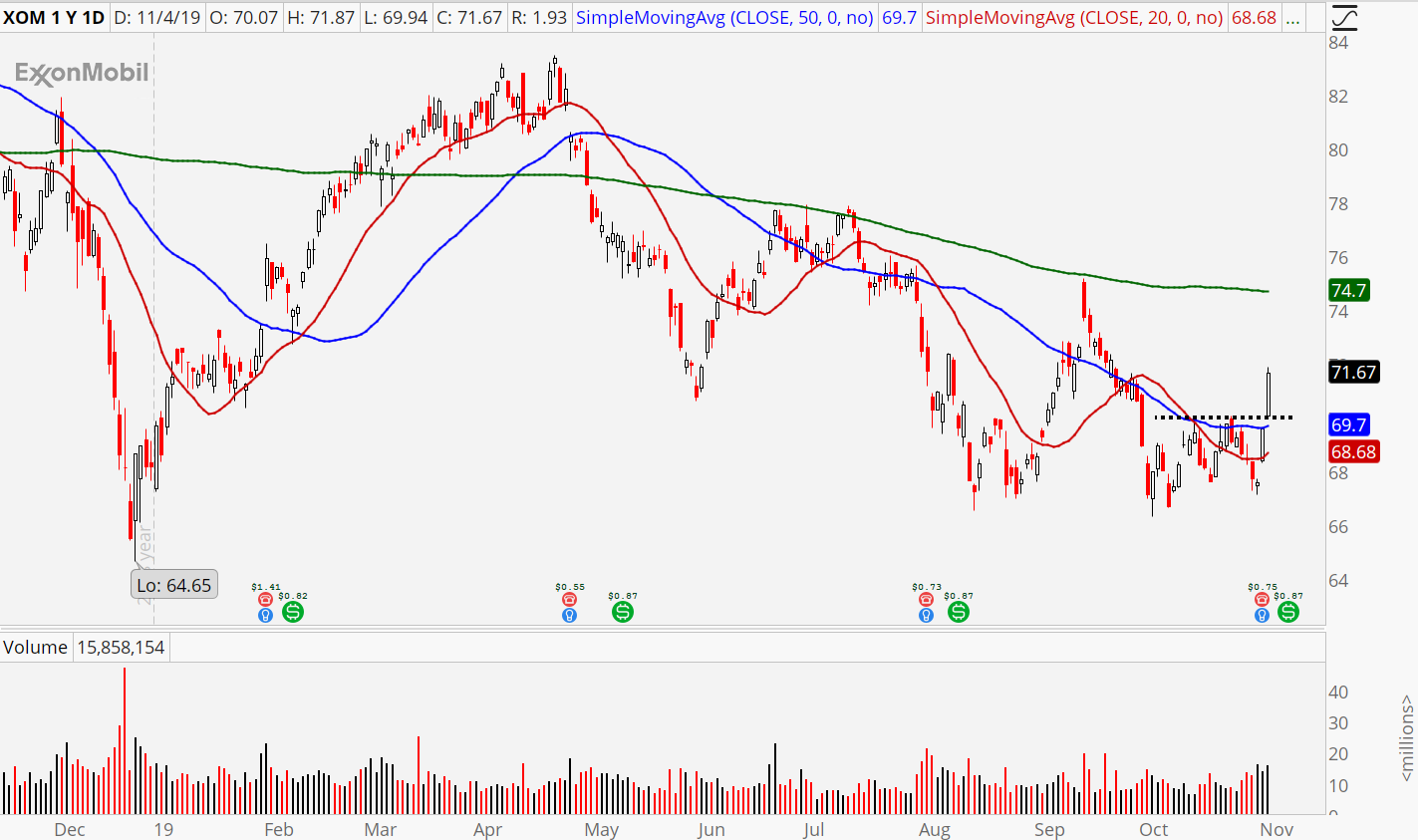 For the majority of 2019 the one sector completely missing from the broader market bull run has been energy. But yesterday that changed in a big way with the Energy Select Sector SPDR Fund (NYSEARCA:XLE) popping 3.3%. Exxon Mobil was a large contributor to the gains, notching a breakout that carried it up 3% to a one-month high.

It also cleared the 20-day and 50-day moving averages, paving the way for a return to its 200-day and old resistance at $75.

Options traders swarmed XOM stock all day long driving overall activity to 355% of the average daily volume, with 114,985 total contracts traded. Popularity was split 52% versus 48% between calls and puts.

Implied volatility climbed to 20% or the 16th percentile of its one-year range. Premiums are now pricing in daily moves of 88 cents or 1.2% so set your expectations accordingly. My strategy of choice here would be a bull call diagonal spread.