Some Robinhood users have been manipulating the stock-trading app to trade with what they’re calling “infinite leverage.”

The cheat code was being shared on social media site Reddit, with one trader claiming he took a $1,000,000 position in stock using only a $4,000 deposit. Through Robinhood Gold, the start-up’s subscription service, users can borrow money from the company to make trades. The backdoor was essentially free money and was being called “infinite leverage” and the “infinite money cheat code” by Reddit users who discovered it.

Margin trading is common, and allowed by most brokerage firms. It lets traders borrow money to buy stocks: the buyer puts down a percentage and the brokerage acts as the lender. The glitch in Robinhood’s case allowed users to overstate the amount of money users had in their accounts to borrow against.

A Robinhood spokesperson said the company was “aware of the isolated situations and communicating directly with customers.”

Another Robinhood user posted a video claiming to have gotten 25 times leverage by turning $2,000 of stock into $50,000 worth of buying power. Multiple other users posted videos and screenshots of the hack, with directions on how to repeat the cheat code. Bloomberg News first reported the glitch. 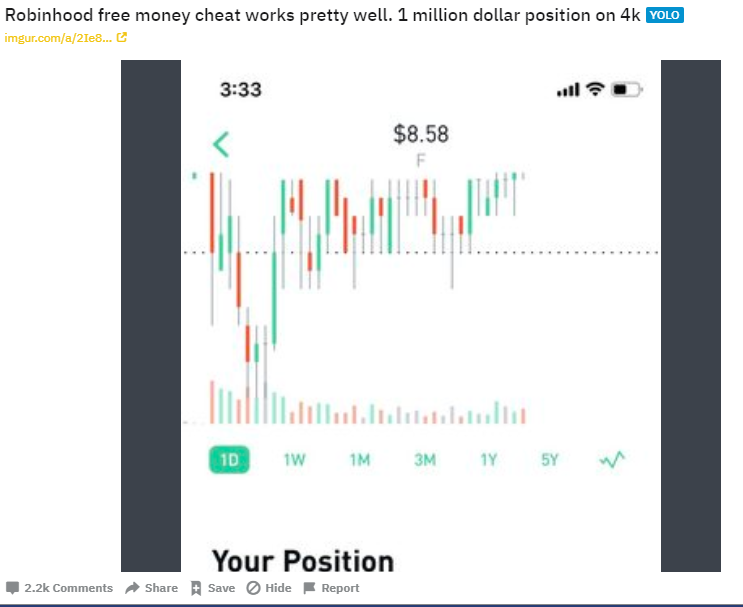 Robinhood has ushered in a $7.6 billion valuation and more than 6 million users since launching in 2013. Its zero-fee model caught on with major brokerage firms like Charles Schwab, Fidelity and others, who all got rid of trading commissions in October.

The Menlo Park, California-based company made headlines last year after the botched announcement of what it called a checking and savings account with a 3% interest rate in December. A day later, the digital brokerage firm announced it would re-launch and re-name the product, and recently launched a cash management account. The start-up is stepping even further into traditional finance with an application to the Office of the Comptroller of the Currency, or OCC, for a national bank charter.