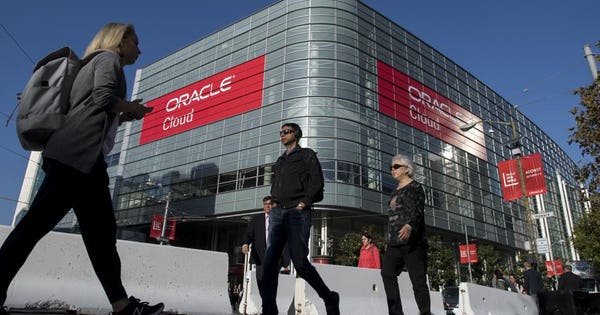 I have had good reasons to own Oracle (ORCL) and to recommend Framework Investing members to buy it over the past few years. The company has a very strong franchise in databases, database applications, and servers that run databases, and company management has done a good job refining its ability to convert the firm’s recurring revenue stream to profit.

Because Oracle was arguably late to embrace a switch to Cloud computing, and because most investment people talking about the Cloud don’t know what they are talking about, Oracle has been considered almost a passé example of “Old Tech.”

Investors whose first reaction is to sell the shares if the company fails to report what sell-side analysts thinks the company should generate in Cloud revenues have repeatedly offered me good investment opportunities.

However, I was not so quick to step in to buy share or structure an option transaction after Oracle’s last post-quarterly announcement price fall. The reason for my circumspection was my shock at the company’s phenomenal level of compensation-related stock issuance – totaling an imputed value of over $3 billion (calculated by multiplying the number of shares issued by the average price over the fiscal year).

This is the one aspect of Oracle ownership that has always rankled me. Larry Ellison, one of Oracle’s founders, its former CEO and present CTO, and the owner of just under a third of the company’s shares, always seemed to be able to convince the board that he needed to be issued more stock options, presumably to “better align his motivations with the interests of shareholders.”

In Oracle’s 2015 fiscal year, when Safra Catz and Mark Hurd ascended into co-CEO roles, and Ellison took a step back into the CTO position, I breathed a sigh of relief, imagining that as Ellison removed himself from day-to-day management, outsized option issuances to him would moderate, creating less dilution for me.

2017 was an unpleasant outlier, but I still expected to see imputed value of share issuance fall off over time. The fact that it went the opposite way over the last fiscal year (which ended on May 31, 2018) – with the imputed value of share issuance equating to over 8% of Oracle’s 2018 revenues and very nearly all its Net Income – made me think that it was time to rethink my long-term ownership position in the company.

As I dug further into the numbers – both those published in the Annual Report and in the company’s proxy statement – I gradually came to see that, contrary to appearances, the company has been working to reduce share issuance and, indeed, future imputed costs of share-based compensation should come down at the company.

Upon analysis, the large uptick in issuance in 2018 seems related to three things:

A company has limited control when options issued to employees are exercised (resulting in share issuance and dilution to owners). Usually an option grant vests over several years, but because the options expire 10 years from the data of the grant, employees can choose to exercise vested options whenever the stock price makes it particularly attractive to do so. The average strike price for the options outstanding is in the $30 range, making the present price in the upper $40 / share range particularly attractive.

RSUs, on the other hand, vest in four tranches over four years, and as soon as a tranche vests, shares are issued (as long as the employee has not quit or been fired, in which case, the RSUs are canceled). As such, Oracle knew that when it granted 28 million RSUs in 2015, at most one-quarter of that amount (7 million) would vest in 2016 and be automatically issued.

Long story short, Oracle has cut share issuance over the past few years, but present shareholders’ stakes are still being diluted by options issued a few years ago.

The careful reader of the figure above will likely have focused in on what looks like a very large issuance of options to Oracle’s CTO and co-CEOs, made in 2018.

After reading through Oracle’s proxy statement, I grudgingly acknowledged that if Ellison, Catz, and Hurd received these options, I would be in a good position myself. I wrote a longer note about this to Framework members but in this article, will simply post the portion of the company’s proxy that explains the conditions for the executives to receive and execute the company’s options.

Reading through this proxy statement and seeing that 1) equity award values have dropped nearly in half for these C-level employees and that 2) these employees would only be able to receive these shares were the firm to be firing on all cylinders from both an operational and market capitalization perspective, I started to think that corporate governance at Oracle had changed in a positive direction.

An old friend once told me that “A leopard don’t change its spots”, but in the case of Oracle, it looks like it has. For Oracle owners, this is good news.