U.S. stock futures are inching higher after an extremely quiet session on Tuesday. The pause allowed equities to digest the recent gains, which have propelled the market to record levels.

In the options pits, overall volume fell back from Monday’s spike, with calls once again outpacing puts by a wide margin. Roughly 23.1 million calls and 15.5 million puts circled the tables.

Meanwhile, over at the CBOE, the single-session equity put/call volume ratio continues to drift near the lower-end of its 2019 range. The distance between puts and calls narrowed slightly, driving the reading to 0.58. At the same time, the 10-day moving average slipped to a four-month low at 0.59.

Last month’s earnings announcement thrust Intel back onto the radars of momentum traders everywhere. The better-than-expected report lit a fire under the stock and created an epic breakout that has since seen substantial upside follow-through. Its moving averages are all cruising higher, making it a tantalizing buy into any weakness that may crop up in the coming days.

That said, the primary reason for Tuesday’s hubbub in INTC stock options is today’s ex-dividend date. The tech giant will pay its next quarterly 31.5 cent dividend to shareholders of record. To capture the 2.2% dividend yield, traders used call options for short-term control of the stock. 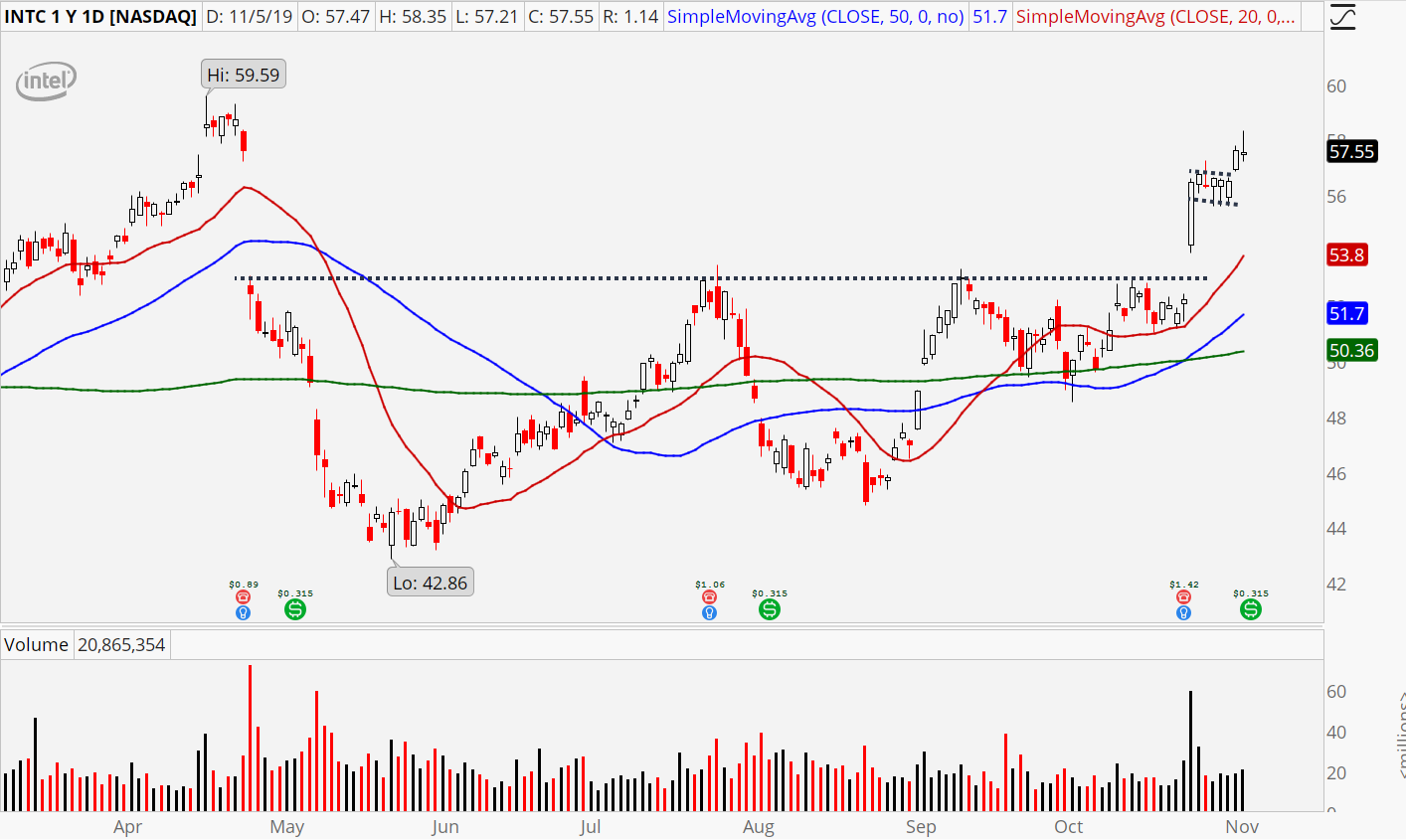 Total activity rocketed to 772% of the average daily volume, with 678,090 contracts traded. About 96% of the trading came from call options alone.

Implied volatility ticked slightly higher but remains low at 24%, or the 20th percentile of its one-year range. Premiums are baking in daily moves of 87 cents or 1.5%. Bull call diagonal spreads such as buying the Jan $55 call and selling the Dec $60 call are my strategy of choice here. It will position you to profit from neutral-to-bullish action over the next six weeks.

Uber shares have taken investors on a rickety ride through Hades. And the descent isn’t over yet. Fresh depths were reached on Tuesday, when traders whacked the stock after the company released third-quarter earnings. The 10% plunge dropped UBER stock below $28 for the first time in its short history as a public company. And the pain is continuing premarket with the stock trading down another 7%. 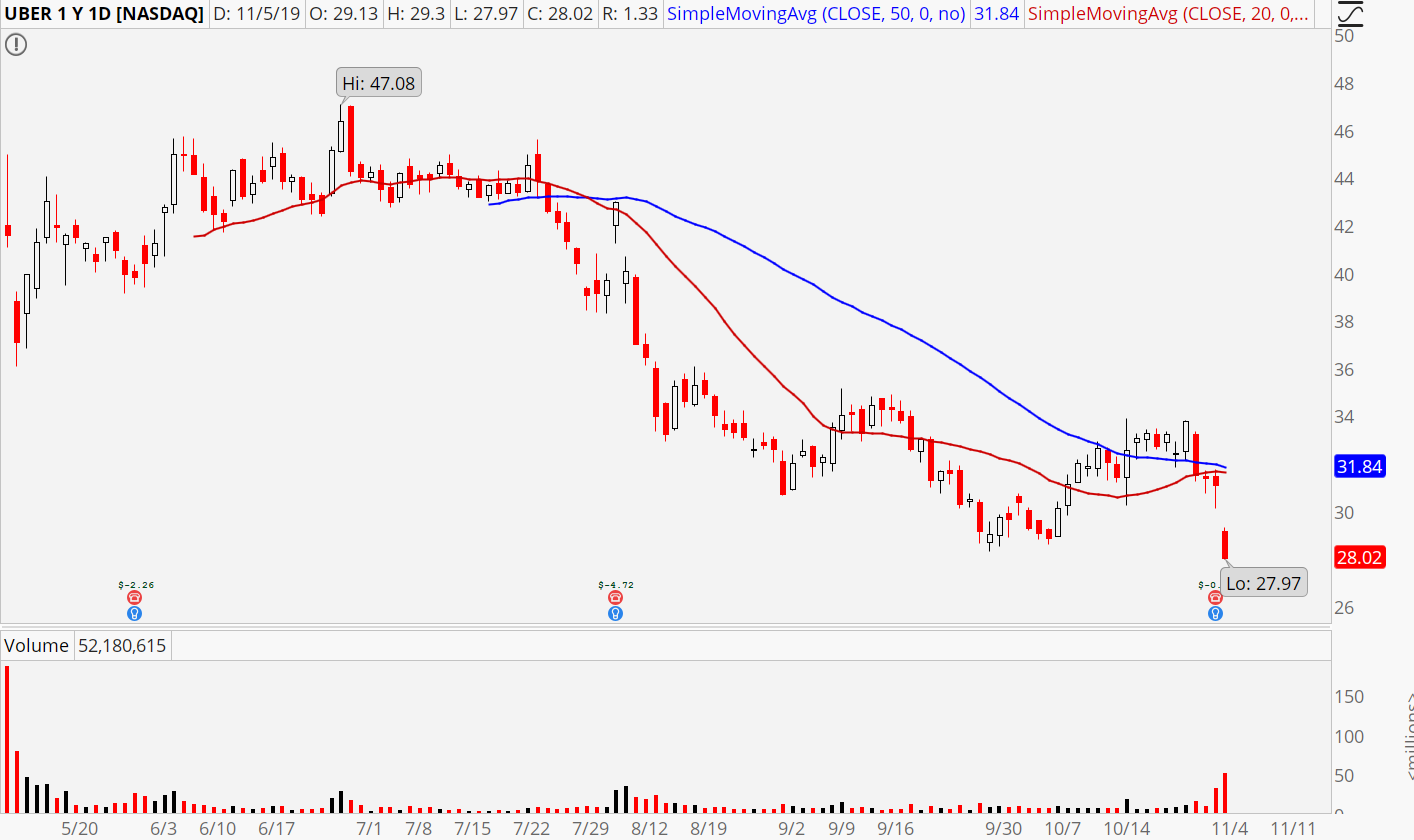 Over 52 million shares traded during yesterday’s freefall, marking its third-largest volume session ever. As far as the numbers go, Uber actually topped analyst estimates by only losing 68 cents per share on $3.8 billion in sales. The Street was forecasting losses of 81 cents per share on $3.7 billion in revenue. Nonetheless, investors found the $1.2 billion loss for the quarter to be too much to swallow.

If you’re a follower of technical and fundamental analysis, it’s impossible not to be bearish on the stock right now. There’s simply too much going against it.

On the options trading front, traders chased puts throughout the session. Activity grew to 605% of the average daily volume, with 457,782 total contracts traded. Puts accounted for 63% of the trading.

One area has not enjoyed the return of equities to record highs. The lure of risk assets has come at the expense of safer ones like bonds and bond proxies. Utilities, REITs and some higher-dividend-paying consumer staples stocks suffered profit-taking this week, and that is hurting shares of Coca-Cola.

The past two sessions have seen heavy profit-taking driving KO stock down 2.7% amid above-average volume. It created the first significant support break we’ve seen since February and has now officially turned the daily trend down. We’re well below the 20-day and 50-day moving averages, confirming that bears hold the upper hand in the short run. 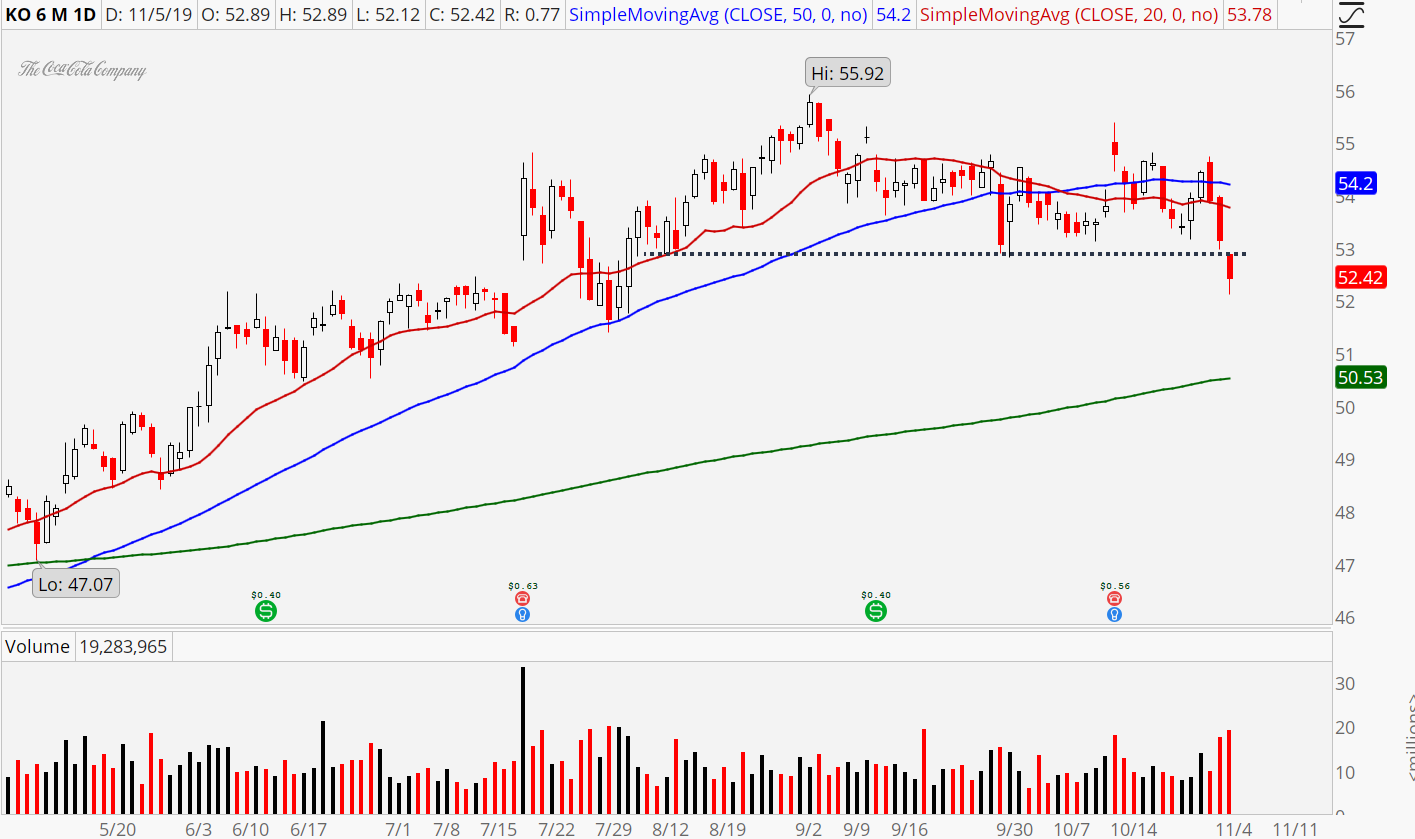 As for the weekly chart, however, things look fine. The long-term trend remains intact and this will likely turn out to be another in a long line of pullbacks that create compelling long-term buying opportunities. With the low-interest-rate environment seemingly here to stay, there should always be demand for a stable dividend payer like Coca-Cola. Its 3.1% yield will only get more compelling if sellers press their short-run advantage.

As of this writing, Tyler Craig held bullish positions in INTC. For a free trial to the best trading community on the planet and Tyler’s current home, click here!