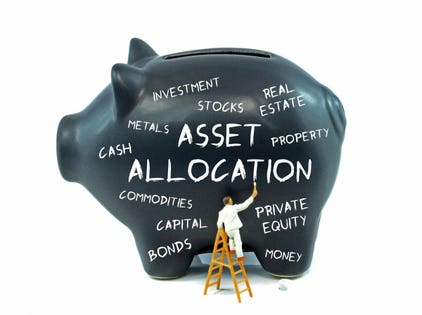 Has the “free lunch” of investing been over-sold to investors?

The financial advice industry has been on a sugar-high…that has lasted decades.  Since the 1980s, claims of “Nobel Prize-winning theories” and the virtues of “diversification – the free lunch of investing” have been force-fed to investors ad nauseum.  I have heard it said that when it comes to a good idea in financial advice, it takes about 20 years from the inception of that idea until the time is it “mainstream.”  Since more investors probably recognize the term “asset allocation” than most others related to the management of their money, I think it is fair to say that asset allocation as a concept is now well-rooted in the investment planning process.  But, conventional wisdom about investing has a history of being helpful until it crashes and burns, taking years of retirement savings with it.

If you think I am just crying wolf, look at the uncomfortable charts above and below.  They are the same chart, but over two different time frames.  The one above shows the rolling 3-year annualized return of 4 of the 100 ETFs I follow closely to gauge the overall health of the financial markets.  Toward the left side of the chart, you can see that the peak back in 2012, stock/bond mixes as defined by S&P’s “Relative Risk” indexes produced 3-year returns of over 20% a year for aggressive allocation strategies, about 7% a year for conservative allocations, and comfortably in the 10%+ range for moderate and growth allocations.  To paraphrase Monty Python, you couldn’t swing a dead cat without hitting a successful asset allocation investment strategy.

That period ending in 2012 produced sharply high returns since it started with the bottom of the stock market in early 2009, the tail end of the Financial Crisis of 2007-2009.  3-year annualized returns stayed high until about 3 years ago, and that brings us to the chart below.  It is the same chart, but it zeroes in on 3-year annualized returns for the periods that ended in mid-2015 through the current time.  Or, at the risk of a financial tongue-twister, the 3-year returns of the past 3 years (please contact me if this concept is not clear to you).

What this shows is that if you started investing in a typical asset allocation strategy any time since mid-2012, your returns have been progressively worse.  I suspect that many investors either do not realize this, or they have acted irrationally and declared their portfolio a “loser” as compared to the S&P 500, Dow, Nasdaq and other glitterati of the current investment world.  In reality, the message here is that the traditional way of allocating assets (global stocks and bonds, with emphasis on U.S. markets) lost its mojo a while ago.  And based on the precarious positions of the stock and bond markets today, I would not want to be in a position of counting on a return to glory any time soon.

Now, if you look at the right side of that second chart (immediately above), you can see that for the most recent 3-year period, the aggressive allocation returned just over 4%, the growth allocation about 3%, the moderate allocation about 2% and the conservative allocation about 1.5%.  Note that these returns exclude dividends, so you can add perhaps 1-3% to them, depending on the time period and allocation you are looking at.

But keep in mind that just as the price appreciation of the asset allocation approach has been tailing off, so too has the income portion of the approach.  That’s due to steadily declining rates on bonds, which provide much of the income boost to these strategies, particularly the conservative and moderate risk types.  So, asset allocation proponents have a two-headed monster to deal with: the price return and the income return are in decline the past few years, and it would take a continued, sustained surge in equity and bond returns to reverse that soon.  Count me among the disbelievers!

Look, none of this is to say that asset allocation as an investment approach is a bad idea.  But its days as a “set it and forget it” approach, which is how it is used in many corners of the financial planning world, are numbered.  Because observant investors are starting to figure out that the S&P 500 is not the “stock market,” and that the returns of that benchmark have masked the quiet sound of air seeping out of the asset allocation bubble.  That sound will get louder in the coming months and years, and it will finally force “Modern Portfolio Theory (MPT)” devotees to re-assess how “modern” their approach to traditional asset allocation really is.  MPT works well in strong markets and over periods of declining interest rates.  This decade will likely see the turning point of that story, and I suspect that many financial planning firms will fight that trend, as they did back in 2000 and 2007 when long-held, oversimplified belief systems went from “easy” ways to keep clients happy and get paid well, to a renewed focus on true investor objectives.

At that point, a variety of concepts left for dead, such as active management, objectives-based investing and alternative approaches to the asset allocation dilemma will resurface.  Frankly, they never went away.  But investors and their advisors are unlikely to notice them until the pungent smell of smoke currently wafting through the investment climate turns to fire.  But after all, that’s what makes markets so fascinating.