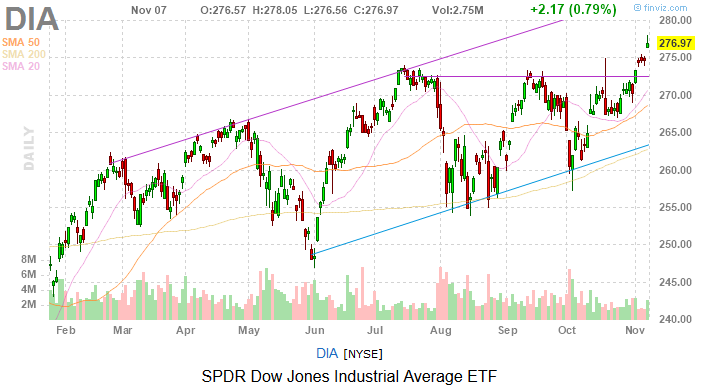 The Dow Jones Industrial Average closed in the green Thursday, adding 0.66%. But investors may be left thinking about what could have been because stocks opened noticeably higher before drifting lower over the course of the day.

As was the case on Wednesday, trade talks were in the spotlight today and the news was mostly encouraging amid reports that the U.S. and China are moving toward lifting tariff’s on each others exports.

According to the Boston Globe, “A U.S. official, who spoke on condition of anonymity, confirmed Thursday that an agreement to roll back tariffs would be part of phase-one deal.” Bloomberg expanded upon this stating that “[t]he negotiations are ongoing and a time or place for any signing of a pact is yet to be determined.”

News of lifted tariffs should be rewarding for U.S. technology companies, many of which are trade-sensitive and depend on China as a major end market. Those headlines why six technology stocks were among the Dow’s 20 winners today.

Still, with the tariff news in mind, investors likely expected better than the Nasdaq Composite gaining just 0.28% while the S&P 500 added a mere 0.27%.

As a reminder, Disney (NYSE:DIS) reports fiscal fourth-quarter results after the close today. The entertainment giant gained 1.2% today in advance of that report. With another quarter of the Fox content library in the books and the Disney + streaming service just getting off the ground, analysts and investors will be anxiously awaiting commentary from Disney management on those items, among others.

“Streaming investments are forecast to weigh on Disney’s bottom line in its fiscal fourth quarter. The company is expected to report 95 cents in adjusted earnings per share, down from $1.48 in the same quarter in 2018. Revenue is estimated to come in at $19 billion, versus $14 billion last year,” according to Barron’s.

On lighter news, managed care provider UnitedHealth (NYSE:UNH), a stock that has made a few appearances in the “Dow Jones Today” space in recent months, added 2.3% today. I mention this because for the bulk of this year, UNH and rival managed care providers have languished amid political headwinds. But the group seems to be moving past the doomsday Medicare For All scenario. UNH’s nearly 14% gain over the past month proves as much.

Shares of Nike (NYSE:NKE) added 1% today, an impressive move considering the company is dealing with some poor public relations.

In an op-ed in The New York Times, track and field athlete Mary Cain, formerly a member of Nike’s Oregon Project, made damning comments about Alberto Salazar, the program’s coach.

“I joined Nike because I wanted to be the best female athlete ever. Instead I was emotionally and physically abused by a system designed by Alberto [Salazar] and endorsed by Nike,” Cain stated.

Cain said the program forced her to lose weight to increase her performance and that she suffered mental and physical harm as a result.

Additionally, each of the Dow’s four financial services components closed higher. Combining these two sectors in this conversation is relevant because both energy and financial services are viewed as value destinations and there continues to be talk of a value resurgence.

“We’ve had a growth scare, and we’re coming out of that. And what was priced for worse than a growth scare were the value, the cyclical stocks,” said Morgan Stanley Investment Management’s Andrew Slimmon in a recent CNBC interview. “Those value stocks are the big opportunity, and they’re starting to rally.”

Keeping with the value theme, investors need not fear this concept because, as highlighted by energy and financials, there are some sectors where cyclicality and value intersect. For those looking to play defense without paying up on valuation for consumer staples and utilities, healthcare, one of the Dow’s larger sector weights, makes sense.

“Thanks to its noncyclical business, Health Care historically outperformed the broader market in six of seven US recessions by an average of 10% and in eight of 11 slowdowns by an average of 5% on a cumulative basis since 1960. This provides a strong defensive exposure in the current slowdown environment,” according to State Street.