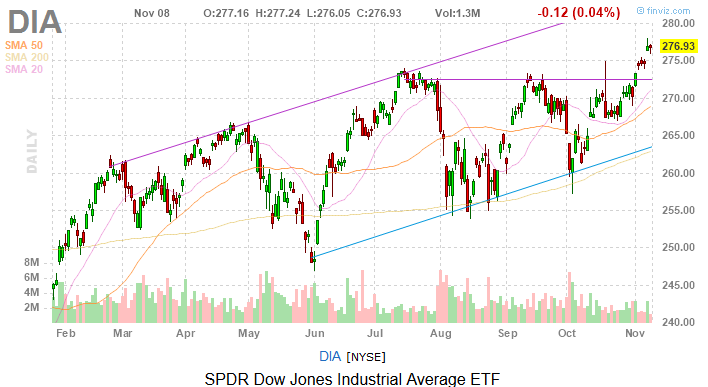 Excluding a stellar post-earnings move by Disney (NYSE:DIS), there wasn’t much to write home about today for the Dow Jones Industrial Average. Today, the Dow Jones added just 0.02%, as President Trump made some comments that were interpreted as meaning a trade deal between the U.S. and China isn’t as close as previously expected.

Trade has been in the spotlight for much of this week and, to be fair, the president’s comments today weren’t as harsh (by his standards) as they have been in the past. Trump merely indicated that China wants a rollback on tariffs — a notion that powered technology stocks higher yesterday — and that the U.S. hasn’t agreed to that yet.

Previously, White House economic adviser Larry Kudlow said that if the two sides can come to terms on a starter phase of a trade accord, there would be some concessions on tariffs.

Ongoing trade wranglings produced a mostly listless day for equities with the Nasdaq Composite closing the week higher by 0.48%, while the S&P 500 added 0.26%. In late trading, just 11 of the Dow’s 30 members were in the green.

Expenses rose, which many on Wall Street are attributing to the costs associated with upcoming launch of the Disney + streaming service, which debuts next week. Price action in Disney shares today indicates analysts and investors are OK with those higher costs, but that means that Disney needs to quickly prove its a credible streaming player. Data suggest acquired Fox assets are paying off for Disney.

“Revenue for the fourth quarter increased 34% year over year to $19.1 billion,” said Morningstar in a note out today. “Media networks revenue improved 22% due to growth at cable networks and the broadcasting segment. Affiliate fee revenue in the quarter was up 18%, which was made up of a 15 basis points increase from the Fox assets and 7 basis points from higher pricing, with a 4 basis points decline from lower subscribers. This implies a 3% growth in affiliate fee revenue, excluding the effect of the acquired Fox entertainment assets.”

Walgreens Boot Alliance (NASDAQ:WBA) was back among the Dow leaders today, gaining nearly 1%. Walgreens stock has been gyrating this week amid ongoing speculation that it’s a leveraged buyout target with a price tag as high as $70 billion.

There was some chatter about the prospects of that deal today, though mainly of the opinion variety. But for those that like to speculate, big mergers and acquisitions are typically announced over the weekend or on Monday’s and today is Friday. So maybe some new headlines are looming for shares of Walgreens.

As mentioned yesterday, Nike (NYSE:NKE) encountered some rough public relations after a former member of the company’s Oregon Project, made damning allegations about coach Alberto Salazar in a New York Times op-ed. On Thursday, Nike shares rallied, but those losses evaporated today as the company responded to Cain’s allegations.

“These are deeply troubling allegations which have not been raised by Mary or her parents before,” said a Nike spokesperson, according to CNBC. “Mary was seeking to rejoin the Oregon Project and Alberto’s team as recently as April of this year and had not raised these concerns as part of that process.”

It was also a trying week for McDonald’s (NYSE:MCD) following the departure of now former CEO Steve Easterbrook last weekend. However, the stock closed modestly higher today amid news that new CEO Chris Kempczinski finally acquired some stock in the company he’s running, $500,000 worth to be precise.

We’re definitely on the tail end of earnings season, but there are couple of Dow components reporting next week, including Cisco Systems (NASDAQ:CSCO) on Wednesday and Walmart (NYSE:WMT) on Thursday.

In addition to Walmart, a slew of smaller retailers report next week and there’s consumer data due out, so we should start getting a feel for how the holiday shopping season is shaping up, a theme that will be integral in determining the fate of stocks into year-end.