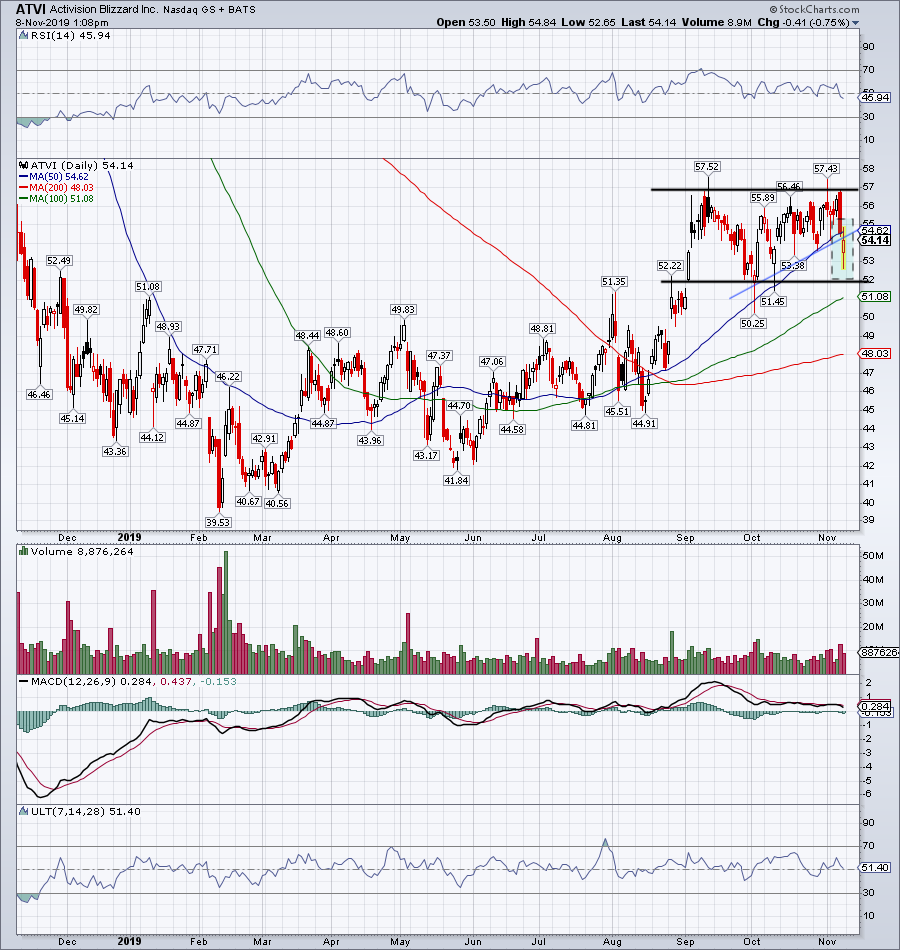 Activision Blizzard (NASDAQ:ATVI) is having a modest post-earnings reaction in terms of percent, with shares only down about 1%.

However, the development is somewhat concerning. While shares have been unable to press though resistance near $57 to $57.50, the 50-day moving average has been support dating back to mid-August.

Losing that level as support now, bulls should take notice. While range support near $52 may be in play, this development is worth noting. Some may prefer to wait for a move over resistance before buying. Clearing the top of the range could open up a further rally in ATVI stock.

On continued downside, see if $52 holds as support. 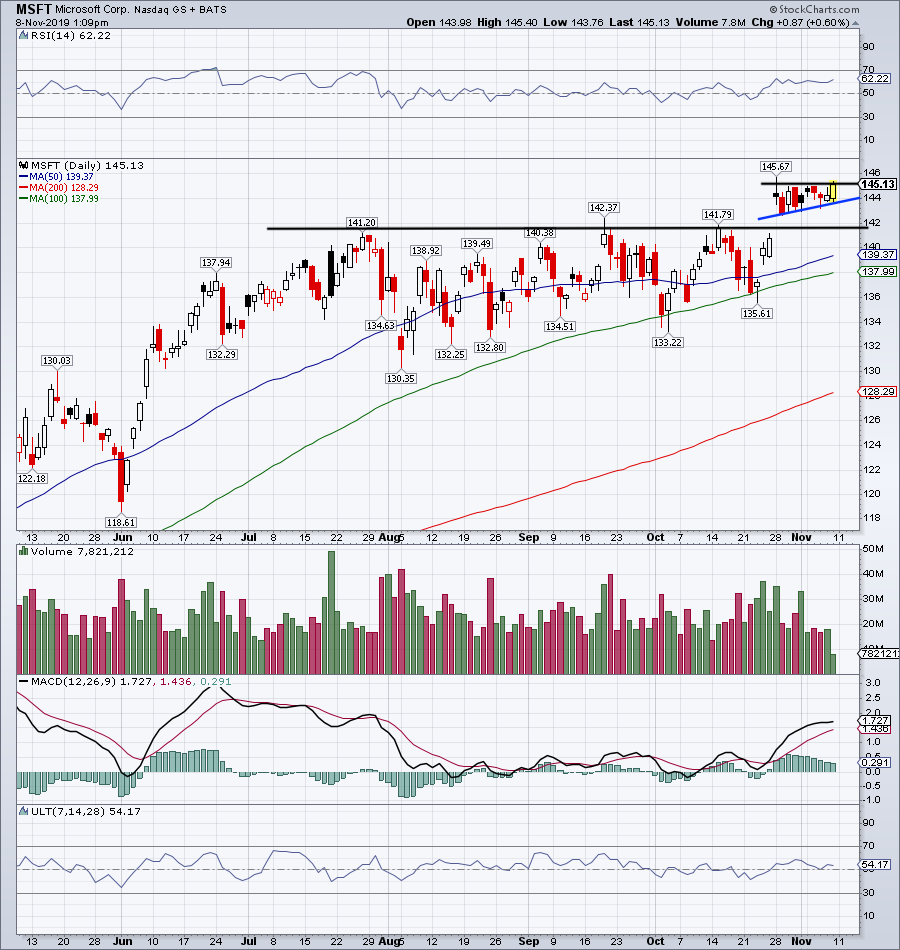 Is Microsoft (NASDAQ:MSFT) setting up for a breakout? Shares have been trading in a very narrow range after gapping up over prior multi-month resistance near $142.

Now pressing the top of its recent range, another breakout could be in development. A move over the current high at $145.67 could trigger a move to $150. Short-term bulls may consider exiting the position below the recent post-gap low of $142.65. 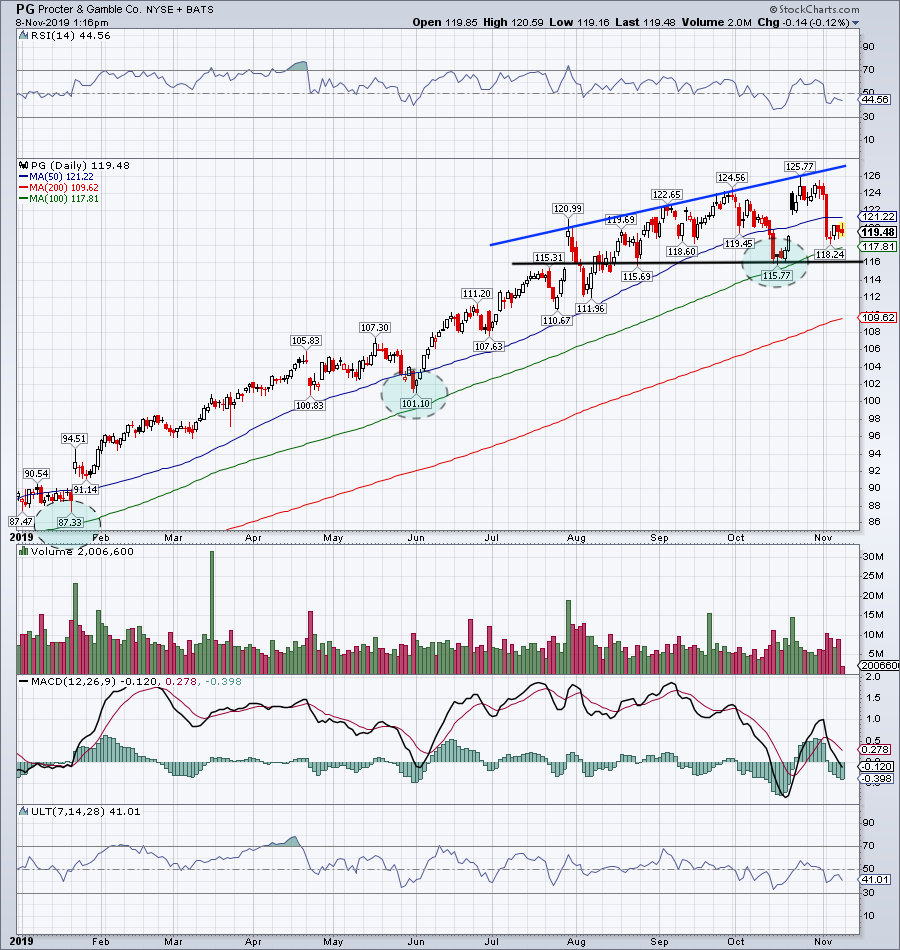 Procter & Gamble (NYSE:PG) is heralded as a blue-chip dividend stud — and no one’s here to dispute those claims. That said, the stock also has solid technical drivers that traders can benefit from.

While eventually the trend will fail, the pattern in PG has been to buy on dips to the 100-day moving average.

That pattern has been play for all of 2019, although it did trigger just last month, too. Seeing the setup come to life twice in less than a month does cause some hesitation, but if traders define their risk — say on a close below the 100-day moving average or below $116 for more risk-hungry traders — then a long position could be justified near current levels.

If shares are able to reclaim the 50-day, look for a run back to $125. Above that and new highs are likely. Below $116 and PG may need more time to consolidate this year’s gains. 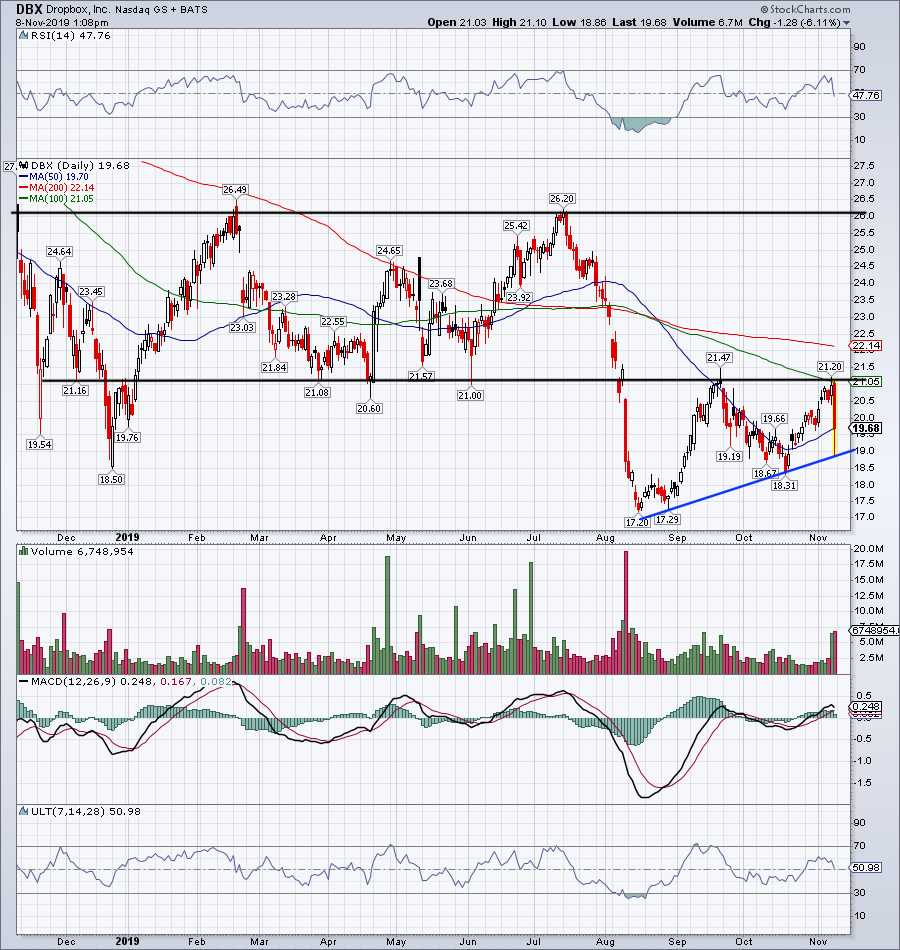 In August, Dropbox (NASDAQ:DBX) blew through range support, falling out of its trading range between $21 and $26. On two subsequent rallies in September and November, DBX has rallied back to former $21 range support.

However, that support level has since turned into resistance.

On the flip side, the stock continues to put in a series of higher lows, as uptrend support (blue line) guides the stock higher. As it hits a static level of resistance at $21, this is technically an ascending triangle.

Hmm … bulls and bears are now clashing at the $21 level, although bears are still in control given Friday’s big decline.

When patterns clash, I tend to sit out. However, for those that have to play, they can do so nimbly. Bulls can be long against Friday’s low. Below that and the October lows are on the table. Over the 50-day moving average is constructive and leaves $21 on the table.

However, $21 is resistance until proven otherwise. Above $21 and the 200-day is the next upside target.

Top Stock Trades for Monday No. 5: The Trade Desk (TTD) 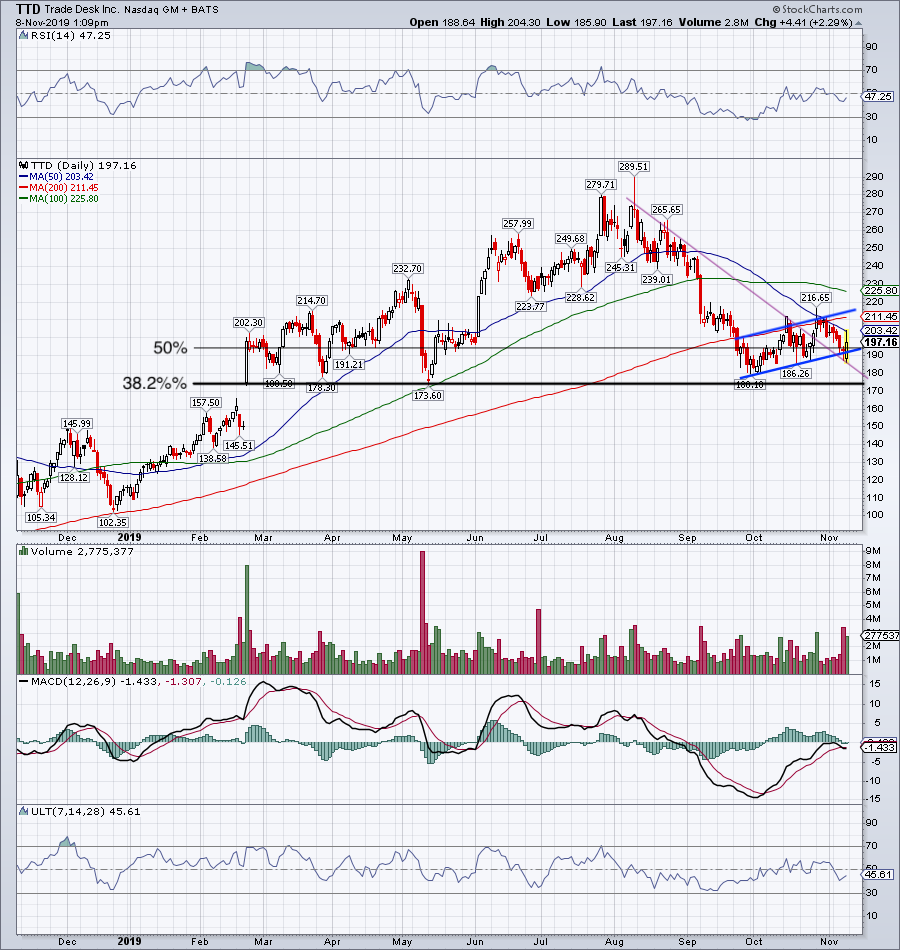 Growth stocks are hated right now and there’s not really another way to put it. That’s just how it is and The Trade Desk (NASDAQ:TTD) is the latest example. The company delivered strong quarterly results, beat estimates and is profitable. Yet shares are still struggling to rally. They even fell in after-hours trading on Thursday.

The 50-day and 200-day moving averages have been stiff resistance since the stock broke below the latter in September.

I am bullish on this company, but not on the stock. Until it reclaims both of these moving averages, it can remain under pressure. Below the October low near $180 and shares could slip into the $170 range, where bulls will need to see if the 38.2% retracement can buoy the name.