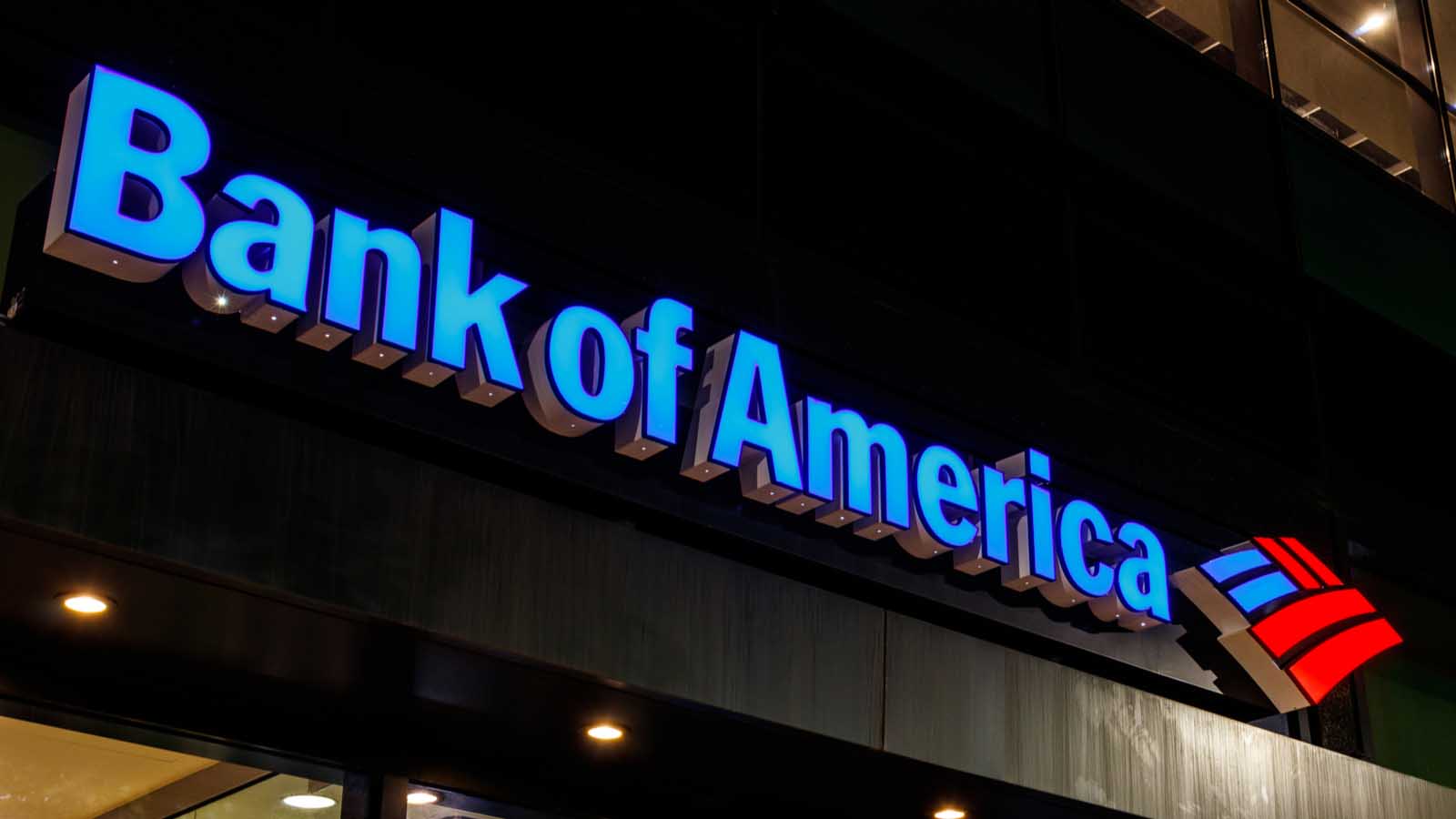 Undoubtedly, one of the biggest catalysts for the major banking stocks is the thawing relationship between the U.S. and China. With the prospect of a trade deal having reached its highest point yet, investors piled into names like Bank of America (NYSE:BAC) stock. Since the start of October, the BAC stock price has jumped nearly 17%. 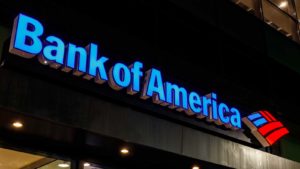 Due to  multiple factors, the swift rally of BAC stock and its peers is deeply encouraging. Primarily, the big banks represent economic bellwethers: wherever they go, the rest of the stock market generally follows. Additionally, if investors were still nervous about the economy,  their anxiety would probably be reflected in bank stocks.

At this point, the only question is how high bank stocks can rally. But does that mean investors should jump aboard Bank of America before the BAC stock price swings any higher?

The momentum of bank stocks is incredibly robust. And that has helped to ease fears about a major economic slowdown. After all, several experts have chimed in, noting that the U.S.-China trade war has damaged both economies. Thus, the rise of Bank of America stock seemingly confirms investors’ belief in the strength of the economy.

I’m not, however, convinced that BAC stock and the big banks are headed meaningfully higher. Even with a restart in U.S.-China relations, the banks’ underlying outlooks are rotting. Here are three charts that affirm the bearish case against Bank of America stock:

Long story short, the more money consumers save in the financial system, the better it is for the banks. 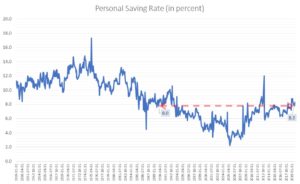 According to the Federal Reserve, the personal saving rate (PSR) has largely flattened in the modern era.

Specifically, in January 1990, the PSR was 8%. In September of this year, the PSR jumped to a whopping 8.3%. Nominally, over the last 30 years, the PSR gained only 0.3 percentage points. Perhaps it may improve in the future, but it’s unlikely to get to the levels seen in the decades when the baby boomer generation came of age.

Therefore, this data point adds pressure to the longer-term outlook of BAC stock.

We all know that Americans typically have difficulty saving. But that implies that they’re spending. And if they’re spending, that suggests banks are lending out money, bolstering businesses and enterprises.

Well, someone needs to tell those enterprises to get on with it! 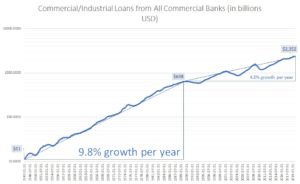 Making this slowdown even more perplexing, we’re living in the most productive era ever. Thanks to companies like Alphabet (NASDAQ:GOOG, NASDAQ:GOOGL), Microsoft (NASDAQ:MSFT) and Amazon (NASDAQ:AMZN), we’re able to do more and get more at ridiculous speeds.

But somehow, with all this technology, the value of commercial loans is declining! Essentially, only an elite few are accessing these loans. Main Street is being left out in the cold. Put another way, the American Dream is slowly, steadily dying. My next chart brings this point home:

No other asset epitomizes the American Dream more  than real estate. From the time most folks first enter the work force, their number one life priority – aside from marriage and family – is home ownership.

But as we know from countless reports, millennials have started to buy homes at a later age than their parents’ generation. And the supposed high spending rates of younger Americans can’t always be blamed for this situation.

For instance, college tuition has skyrocketed over the past several years. It’s reached the point where people really shouldn’t pursue higher education unless they have a clearly defined career path. Moreover, living expenses have blown up in major metropolitan areas throughout the country. 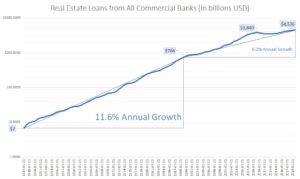 All of these issues and other factors have killed the growth of real estate. Between January  1947 and December 1989, real estate loans have grown at an annual clip of 11.6%. However, since January of 1990, that growth rate has dipped sharply to 6.2%.

Many people are not taking out loans because they can no longer afford a house. And that really hurts the case for Bank of America stock: it’s another avenue where the company is hitting a roadblock.

Although these challenges weigh on  BAC stock price, we can’t forget the golden rule: the market is always right. Thus, trying to fight the tape usually results in pain in the wallet.

At the same time, the fundamentals will matter at some point. And the question for Bank of America stock and its peers is this: where will the money come from?

Americans are not saving, so the net interest income pathway will not boost Bank of America stock. But they’re also not starting businesses and buying real estate like they used to. Therefore, non-interest income is also a fading avenue.

My conclusion is that the American Dream is dying. Conspiratorially, I’m beginning to think that President Trump is much smarter than his Twitter (NYSE:TWTR) outbursts imply. I think he’s been screaming at the Fed to cut interest rates because that is the only reasonable path forward for the American economy , at least until the 2020 election.

Thus, this administration is cutting the wire that connects to the economy’s check engine light. The resulting picture might look pretty, as you can see from the BAC stock price. But  the car in question is being dumped on Americans.