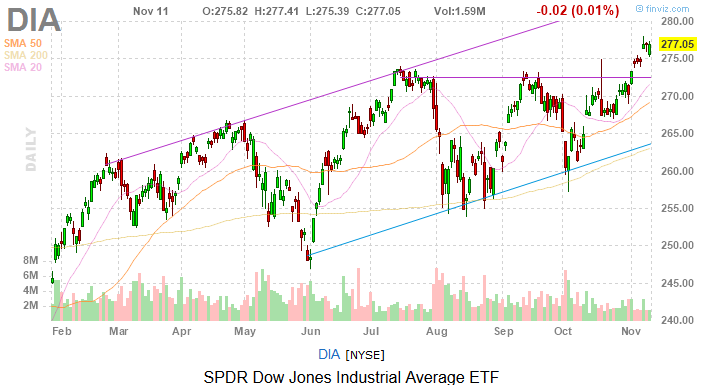 After slumping earlier in Monday’s session, the Dow Jones Industrial Average stormed back to notch a modest gain of 0.03% to start the week. That’s not spectacular, but it’s also decent considering where the blue-chip index started the day and the sheer amount of Dow-related headlines there were for market participants to digest today.

Broadly speaking, it was another slow day as investors waited on more concrete news regarding the ongoing U.S.-China trade saga. Tomorrow could be significant on the trade front because President Trump is slated to deliver remarks before the New York Economic Club.

It’s expected that the president’s prepared remarks will revolve around the strength of the economy and equity markets since he took office. It’s also expected that he might take some jabs Fed Chairman Jerome Powell and some of the contenders for the 2020 Democratic presidential nomination. However, President Trump is known to go off script from time-to-time, so there are potential risks or rewards that come along with Tuesday’s speech.

Focusing on Monday, the Nasdaq Composite lost 0.13%, while the S&P 500 settled lower by just 0.20%. In late trading, just nine of the Dow’s 30 components were residing higher.

Walgreens Boot Alliance (NASDAQ:WBA) has recently been making frequent appearances in this space amid speculation the pharmacy chain could be the target of a massive leveraged buyout offer.

The rumors proved accurate as Walgreens stock surged 5% today on news that private equity giant KKR & Co. has approached the company about going private. Based on Walgreens’ enterprise value (market capitalization plus debt), the pharmacy operator is worth nearly $73 billion, easily making this the largest leveraged buyout on record.

“The New York-based private equity firm has been preparing a proposal to potentially buy out shareholders of Walgreens Boots,” reports Bloomberg, citing unidentified sources familiar with the matter. “It’s unclear how feasible the transaction would be, given the need for large amounts of financing, and Walgreens Boots and KKR could decide against pursuing a deal, the people said.”

While Walgreens surged, it wasn’t the Dow’s best-performing name today. That honor goes to the index’s largest component: Boeing (NYSE:BA).The aerospace giant advanced by 4.5% on reports that the controversial 737 MAX jet could resume commercial flights in January. That’s slightly later than the 2019 year end forecast investors were hoping would come to fruition, but January isn’t bad all things considered.

The company said it expects the Federal Aviation Administration (FAA) will issue an official order next week approving the 737 MAX’s return to the skies.

According to Reuters, Boeing spokesman Gordon Johndroe stated the company “expect[s] the Max to be certified, airworthiness directive issued, ungrounded in mid-December. We expect pilot training requirements to be approved in January.”

Apple (NASDAQ:AAPL) did what it usually does and that’s close higher despite some controversy surrounding the Apple card. Goldman Sachs (NYSE:GS), the issuing bank behind that new credit card, sank 1.7%, incurring the brunt of that controversy amid media and social media reports that the bank’s decision-making algorithm for the card shows signs of bias.

Last Friday, a software developer took to Twitter to say he was offered 20-times the credit limit on the Apple same card as his wife. Apple co-founder Steve Wozniak said his Apple card limit is 10-times his wife’s and he’s urging federal action to get bias out of the approval/credit limit process.

Goldman was one of seven Dow stocks that lost close to or more than 1% today.

As I noted last Friday, Cisco Systems (NASDAQ:CSCO) and Walmart (NYSE:WMT) are the Dow members reporting earnings this week on Wednesday and Thursday, respectively. Investors should hope for positive surprises to get those stocks going. Not surprisingly, data confirm that upbeat earnings surprises are important contributors to stocks’ near-term price action.