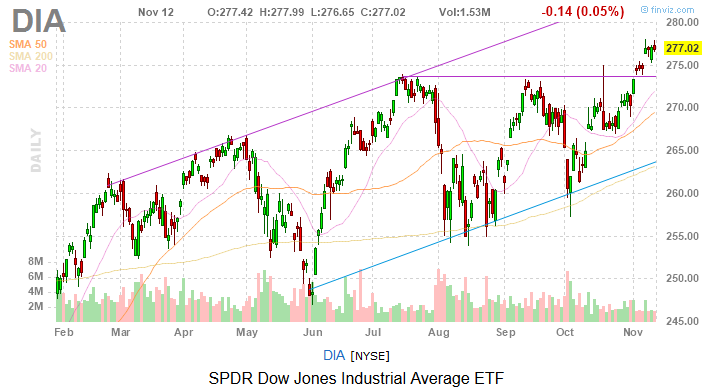 In what may prove to be a positive sign, stocks were mostly flat Tuesday, even after President Trump threatened to raise tariffs on Chinese imports if the two countries cannot finalize Phase 1 of a trade agreement.

The president made those remarks today in a speech before the Economic Club of New York, promising that trade levies will “be raised very substantially” if the world’s two largest economies cannot ratify a previously agreed initial step in broader trade talks.

The two countries were scheduled to sign that agreement this month at a conference in Chile, but that event was canceled due to geopolitical demonstrations there.

“A new site for the signing hasn’t been announced. U.S. locations for the meeting that had been proposed by the White House have been ruled out, according to a person familiar with the matter,” reports Bloomberg. “Locations in Asia and Europe are now being considered instead, the person said, asking not to be identified because the discussions aren’t public.”

Even against the backdrop of Trump’s harsh language aimed at China, 12 of the Dow Jones’s 30 constituents were higher in late trading.

Today marks the launch of the Disney+ streaming service from Dow component Disney (NYSE:DIS), an oft-cited potential catalyst for the already strong stock. Shares of Disney added 1.3%, making the stock the best-performing member of the Dow.

“Not everything is going smoothly for Disney+, though. Users are experiencing service outages and slowdowns with many reports of technical problems flooding social media,” reports Barron’s. “Disney said higher-than-expected demand for the service is playing a part in the technical issues.”

Even with those first day issues, Disney shares closed higher. Now comes the fun part for investors: waiting to see just how much Disney + contributes to the company’s top and bottom lines.

As I’ve been mentioning over the past couple of days, Walmart (NYSE:WMT) is one of the Dow components reporting earnings this week (Thursday), but some analysts are talking about the stock in advance of that report. Specifically, Cowen analyst Oliver Chen was out today discussing how the holiday shopping season is shaping up for Walmart and rival Target (NYSE:TGT).

Recent consumer data “suggest an uptick in concern over future economic uncertainty year over year, which could lead to lower absolute spending levels, plus higher promotions to entice shoppers,” wrote the Cowen analyst. “With this caution in mind, we favor value-oriented stocks this holiday, and believe that the environment is favorable for value momentum to continue at both Walmart and Target.”

A deal hasn’t been formally announced and there are no guarantees it will be because, as Barron’s points out, the math may ultimately prove unattractive to would be Walgreens suitors.

“At $77.50, Walgreens would be valued at $70 billion,” according to Barron’s. “It has $16 billion of net debt, which would give it an enterprise value of $86 billion in this LBO scenario. Its annual earnings before interest, taxes, depreciation and amortization, or Ebitda, are around $8 billion.”

Tuesday’s gains for the Nasdaq and S&P 500 were far from eye-popping, but as noted above, when factoring in President Trump’s trade rhetoric, today’s state of affairs in the markets was decent.

The major U.S. equity benchmarks continue hovering near record highs and a lot of that has to do with strength in technology and other growth fare. While there has been some talk about a value-to-growth rotation, growth stocks still remain compelling.

“What’s particularly exciting about growth investing today is that, for the first time, we’ve been in an economic environment without a traditional business cycle,” said BlackRock in a recent note. “And this means investors will seek out companies that prosper organically on their own, almost independent of the economic cycle. I think this will be a good sign for growth stocks overall, not only today but for years to come.”