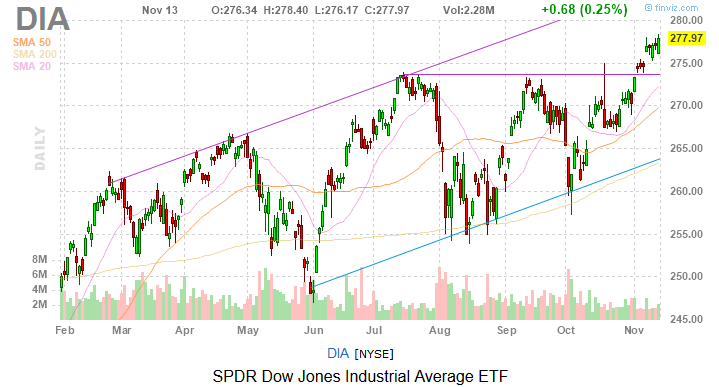 There was ample headline risk for investors to contend with Wednesday as market participants remain skittish about the prospects for a trade deal with China. This questioning comes all while impeachment proceedings kicked off on Capitol Hill and Federal Reserve Chairman Jerome Powell reiterated the view that the central bank is likely to pause on lowering interest rates over the near term.

Broadly speaking, the performance of U.S. equities today was solid when considering all the recent headline risks. In terms of the Fed, Powell previously said that the central bank’s rate cutting regime may be on pause over the next several meetings. As such, his similar comments today before the congressional Joint Economic Committee weren’t surprising.

Some market observers believe Powell’s comments today leave the door open to more rate cuts. This is something President Trump undoubtedly wants to see as he’s making the economy one of the centerpieces of his 2020 reelection bid.

In late trading, 15, or half, of the Dow’s 30 member firms were pointed higher.

Disney (NYSE:DIS) was the Dow Jone’s best-performing name today and the competition wasn’t even close as DIS stock surged 7.3%. This was only a day after the debut of the widely anticipated Disney + streaming service.

I’ve previously noted that it’ll take some time for investors to know the exact impact of Disney + on the company’s quarterly results, but owners of DIS stock don’t have to wait for first-day data on the streaming service. California-based Disney confirmed that more than 10 million subscribers signed up for Disney + on the first day.

Remember, fellow Dow component Verizon (NYSE:VZ) is giving Disney + away free for a year to its customers and Disney wouldn’t confirm how many of those 10 million subscribers are paying for the service.

Still, there’s no denying that 10 million users coming into the fold on the first day is an impressive tally.

On any other day, Nike (NYSE:NKE) stock gaining 2%, would be impressive. And although NKE stock made that gain today, it couldn’t surpass Disney stock. Still, it was good for the second-best showing in the Dow, but it also puts Disney intraday strength into context, meaning no other Dow Jones stock was going to beat the mouse today.

Nike jumped after the company announced it’s pulling its shoes off Amazon (NASDAQ:AMZN). Nike was running a pilot test on Amazon Retail that apparently didn’t prove successful, prompting the move by the Oregon-based company.

Walmart (NYSE:WMT) will report earnings before the bell Thursday, and there was some encouraging action in WMT stock in advance of that report.

Shares of the largest U.S. retailer jumped 1.54% after Telsey Advisory Group lifted its price target on WMT stock to $130 from $125.

“If Walmart does report strong earnings, it could result in a wave of price-target hikes, since its average 12-month price target is just $123.58. Upgrades are possible, too, since there remain seven ‘hold’ ratings out there,” according to Schaeffer’s Investment Research.

Shares of chemicals makers Dow Inc. (NYSE:DOW), one of the smaller components in the blue-chip index, have been on a torrid pace, surging nearly 18% over the past month. However, DOW stock retreated by almost 3% today.

That marks two consecutive days in the red for Dow and it’s easy to understand why. Dow is one of the more trade-sensitive names in the index. With speculation swirling today that there could be some snafus in terms of the agriculture part of the trade deal, an element previously seen as solid, shares in Dow slumped.

Today’s gains weren’t jaw-dropping by any stretch. But the S&P 500 posting a positive finish as the Dow Jones advanced to another record are still notable feats. This is especially true given the considerable potential for headline risk.

Adding to the case for more near-term upside are musings that some hot growth segments are poised to continue rallying, while healthcare, one of the largest Dow and S&P 500 sector allocations, remains an attractive value play.