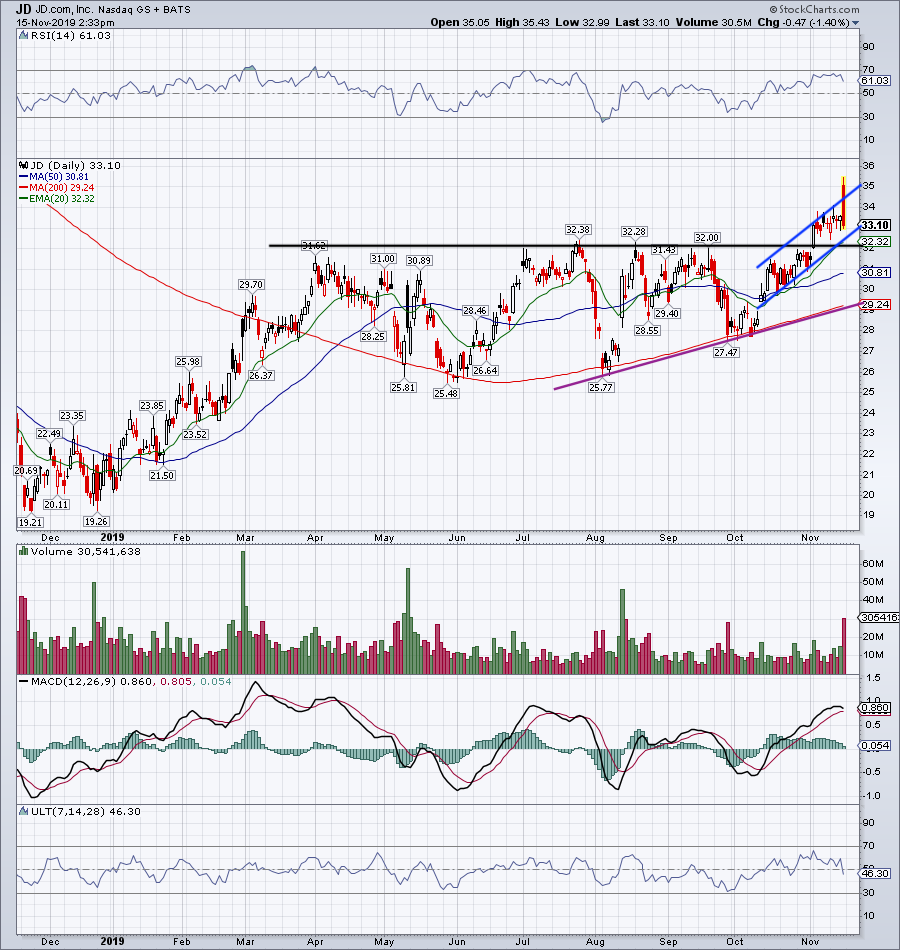 Stocks burst to new record highs on Friday, as investors remain bullish and the trade situation seemingly continues to improve. Let’s look at a few top stock trades from Friday.

Shares of JD.com (NASDAQ:JD) initially took off on Friday, after better-than-expected earnings. However, the stock has given up all of its post-earnings gains and then some on the day, down about 0.3%.

While the action is disappointing for longs, the stock is still holding up above a key breakout zone.

At the beginning of November, JD stock broke out over $32, a multi-month resistance mark. It then consolidated between $33 and $34. Back in that zone now, JD may be able to stabilize.

However, the must-hold level here is $32. So long as shares stay above this mark, JD stock is okay on the long side. Below and it’s a no-touch. Over $34 and the post-earnings high is on the table.

Is J. C. Penney (NYSE:JCP) starting to turn around?

Shares are rallying Friday, but still remain dangerously low. If the company was doing well, the stock wouldn’t be trading for $1.19 at the moment.

However, shares have more than doubled from the August lows and continue to chug higher. It’s putting in higher lows (blue line), but struggling with the $1.20 level. Over that and the $1.26 high from September is possible.

Above $1.26 and perhaps JCP can get a squeeze to $1.40 going. Still, for me, JCP remains a no-touch, given the volatility and low stock price. Use caution on a move back below $1 and its major moving averages. 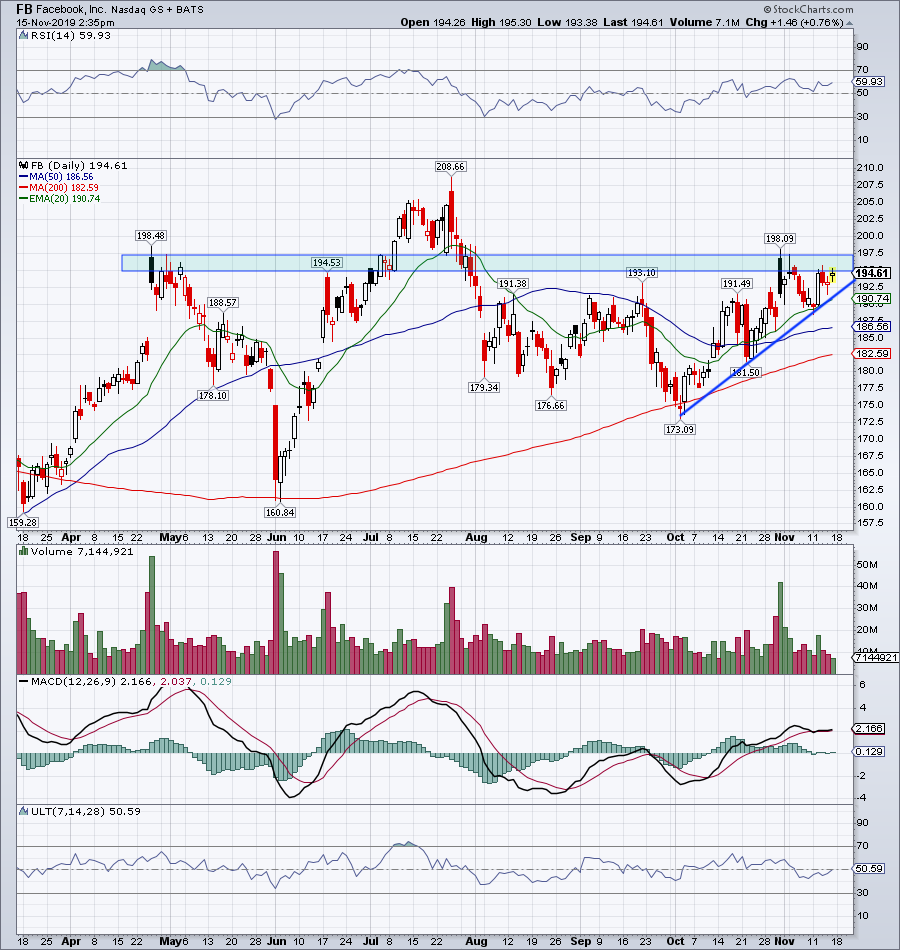 Facebook (NASDAQ:FB) hasn’t been following the Nasdaq Composite to new all-time highs, but the setup isn’t all that bad at the moment.

From the October low, FB stock continues to ride uptrend support (blue line) higher, and is now bumping up against $195 resistance. The stock flirted with a move over this level, but couldn’t get past the $198 level. That hasn’t been uncommon with Facebook, and as a result, we’re using a blue box to highlight that resistance zone, rather than a specific level.

Holding above all of its major moving averages, as well as uptrend support, and FB looks okay on the long side. 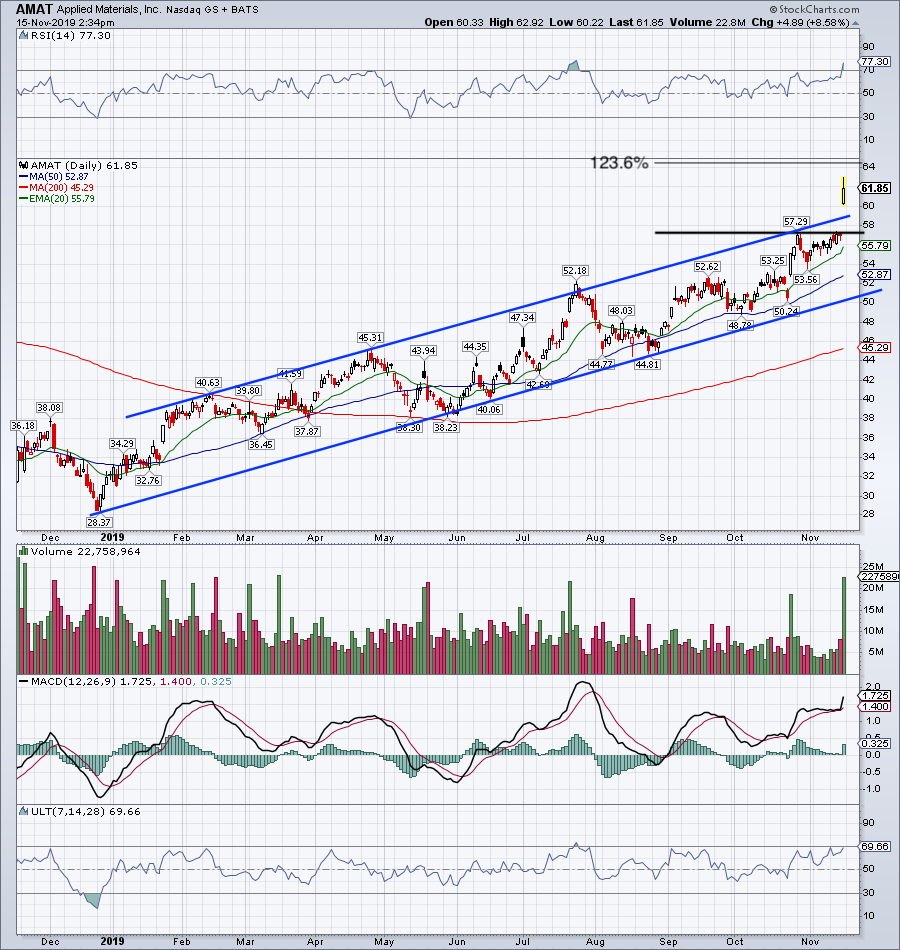 Man, what a big move we saw from Applied Materials (NASDAQ:AMAT) on Friday, up more than 10% at one point. This stock burst over $57 resistance and launched right out of its year-long channel (blue line).

Big moves like this are always hard to trade because we don’t have many levels to measure against. In this case, we do have some to note. AMAT has a Fibonacci extension up at $64.23, which traders can use a short-term upside target. 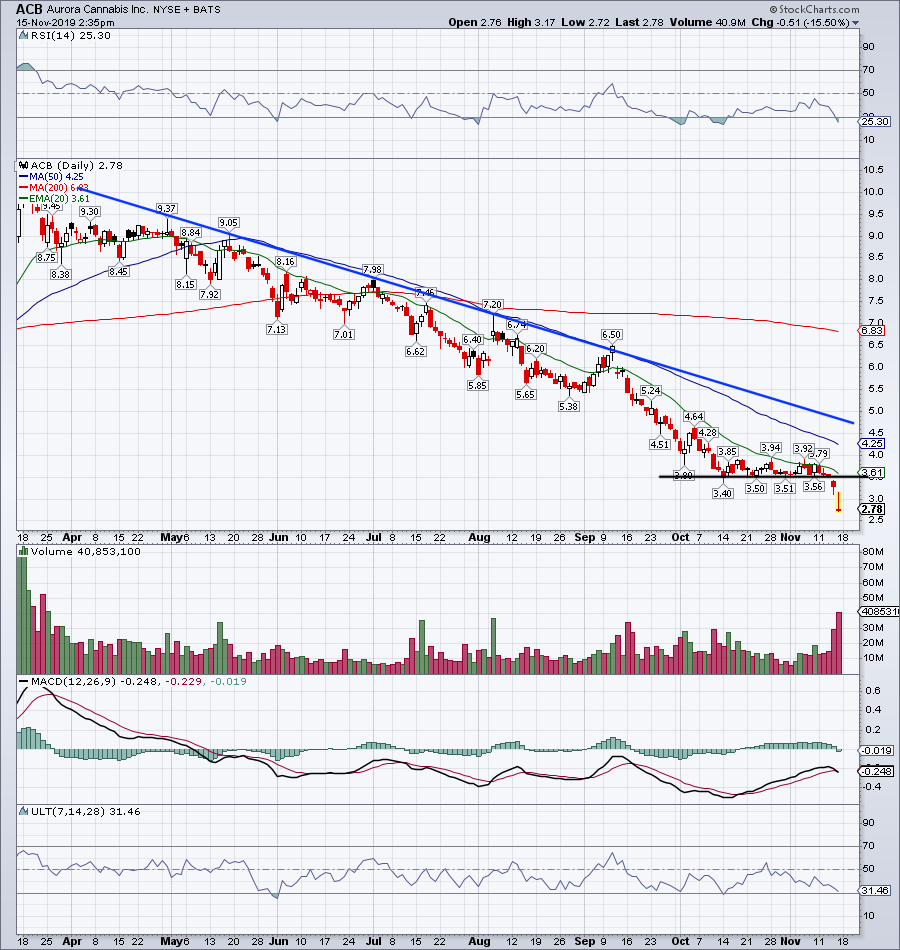 When cannabis stocks started breaking down below major support in the summer, we warned readers to be careful. In fact, we warned them more than once. Yet, some have held on for dear life — and they’ve paid big time as a result.

Just look at Aurora Cannabis (NYSE:ACB), which broke to new lows on Friday after disappointing earnings. Support at $3.50 gave way as ACB opened well below $3 per share.

While someone may be able to pick over the balance sheet and find some reasons to buy it, there are no attractive catalysts at the momentum on the technical side of the spectrum.

For that reason, this is not a buy-the-dip opportunity in my view. See how ACB handles $3.50 on an eventual rebound. If it’s resistance, ACB could head lower again. Over it and perhaps it can garner some momentum.