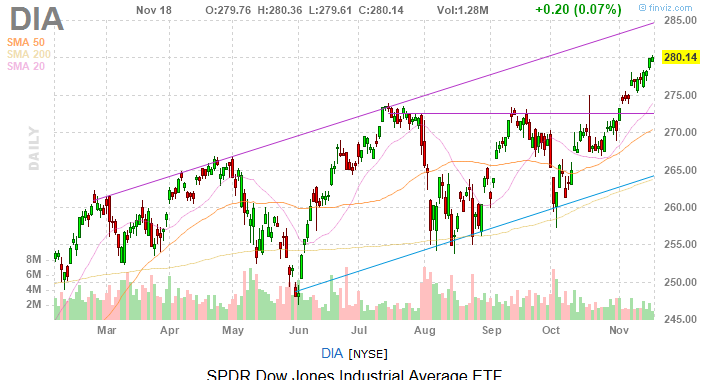 It was a decent day at the office for at least two of the three major U.S. equity benchmarks, as Wall Street’s mindset was afflicted by U.S.-China trade issues. The concern prompted some upside in defensive sectors, sending the S&P 500 up and down throughout the day.

As has been the case for much of the trade negotiations between the U.S. and China, mixed messages from media outlets made life difficult on traders today.

“Word that White House would extend a license to allow U.S. companies to do business with Chinese telecom firm Huawei competed with reports that said Beijing was skeptical about reaching a overarching deal anytime soon,” according to Bloomberg.

Other reports went so far as to say that the mood in Beijing regarding a trade deal is “pessimistic.” Whether that’s accurate remains to be seen, but with few earnings reports of any magnitude left, trade will likely dominate the market’s behavior over the next several weeks.

It’s starting to feel like Disney (NYSE:DIS) is making all the right moves and a year-to-date gain of about 32% confirms as much. Up 2% today, Disney stock was again the Dow’s best-performing name to start the week.

The Disney + streaming service is justifiably commanding plenty of headlines. But Disney is still a powerhouse at the box office. And this was confirmed by the newly released Ford v Ferrari. That movie, starring Matt Damon and Christian Bale, did about $52 million in revenue over the weekend.

What’s important about that isn’t just the revenue tally, but that it was the first real hit delivered by 20th Century Fox since Disney acquired that studio.

UnitedHealth Is Getting Healthy

“Shares of major health-insurance firms were rising Monday morning as political developments over the weekend seemed to lessen the chances of Medicare for All being implemented in the near term,” reports Barron’s.

I’ve been beating the drum on Medicare For Risk throughout this year because my pick in InvestorPlace’s Best ETFs of 2019 contest was the iShares U.S. Healthcare Providers ETF (NYSEARCA:IHF), in which UnitedHealth is the largest holding.

Thanks in large part to UnitedHealth shares being up 10.56% over the past month, IHF is now higher by a respectable 15.53% year-to-date.

Microsoft (NASDAQ:MSFT) notched a modest gain today, putting it toward the bottom among the Dow Jones winners. But the technology giant is still on a roll. Much of the bullishness in Microsoft’s stock this year is based on its Azure cloud business. This part of MSFT is shaping up to be a significant long-term catalyst for Microsoft investors.

“In a research note Monday, Stifel Nicolaus analyst Brad Reback notes that Azure is already at a $17 billion annualized revenue run rate—but that businesses that are potential customers are still in the early stages of shifting computing to the could, with less than 10% penetration so far,” according to Barron’s.

Reback forecasts Azure becoming a $90 billion business for Microsoft by fiscal year 2030, up from $12.5 billion in fiscal 2019.

Geopolitical risk, including the U.S.-China spat, has been ongoing for much of this year. That creates a level of uncertainty markets usually don’t like. However, some market observers believe that tide could turn for the better in 2020 because next year is a presidential election year.

“Geopolitical risk has been a wildcard for markets this year,” said BlackRock in a recent note. “In fact, it is geopolitics that have been an important headwind to an otherwise constructive environment for financial assets: Accommodative monetary policy is in play across multiple geographies, and many of the high-frequency economic indicators we track are pointing to a pick-up in growth. As China and the U.S. could be nearing a two-stage trade deal ahead of the 2020 U.S. electoral process, we see potential for the geopolitical headwind to shift to a tailwind.”