U.S. stock futures are gaining ground this morning in a continuation of the glorious rally that is carrying equities into the holiday season.

In early morning trading, futures on the Dow Jones Industrial Average are up 0.14% and S&P 500 futures are higher by 0.22%. Nasdaq Composite futures have gained 0.42%.

In the options pits, the results followed their typical path with call volume leading the charge. Given the complacent backdrop for stocks the continued dominance of call demand should come as no surprise. By day’s end, some 20.1 million calls and 14.2 million puts changed hands.

The gap between calls and puts did narrow at the CBOE Volatility Index (VIX), but it was coming off of extremely low levels, so some mean reversion is reasonable. The single-session equity put/call volume ratio climbed back to 0.55. At the same time, the 10-day moving average held its ground near 0.56.

A few notable stocks were seeing heavy options activity on Monday. Disney (NYSE:DIS) continues to see significant call activity after the launch of its highly anticipated Disney + streaming service. Valero (NYSE:VLO) has one of the best setups of all energy stocks and saw monster call volumes ahead of Tuesday’s ex-dividend date. Finally, Nvidia (NASDAQ:NVDA) roared back after a quick post-earnings slip and looks ready for an upside breakout. 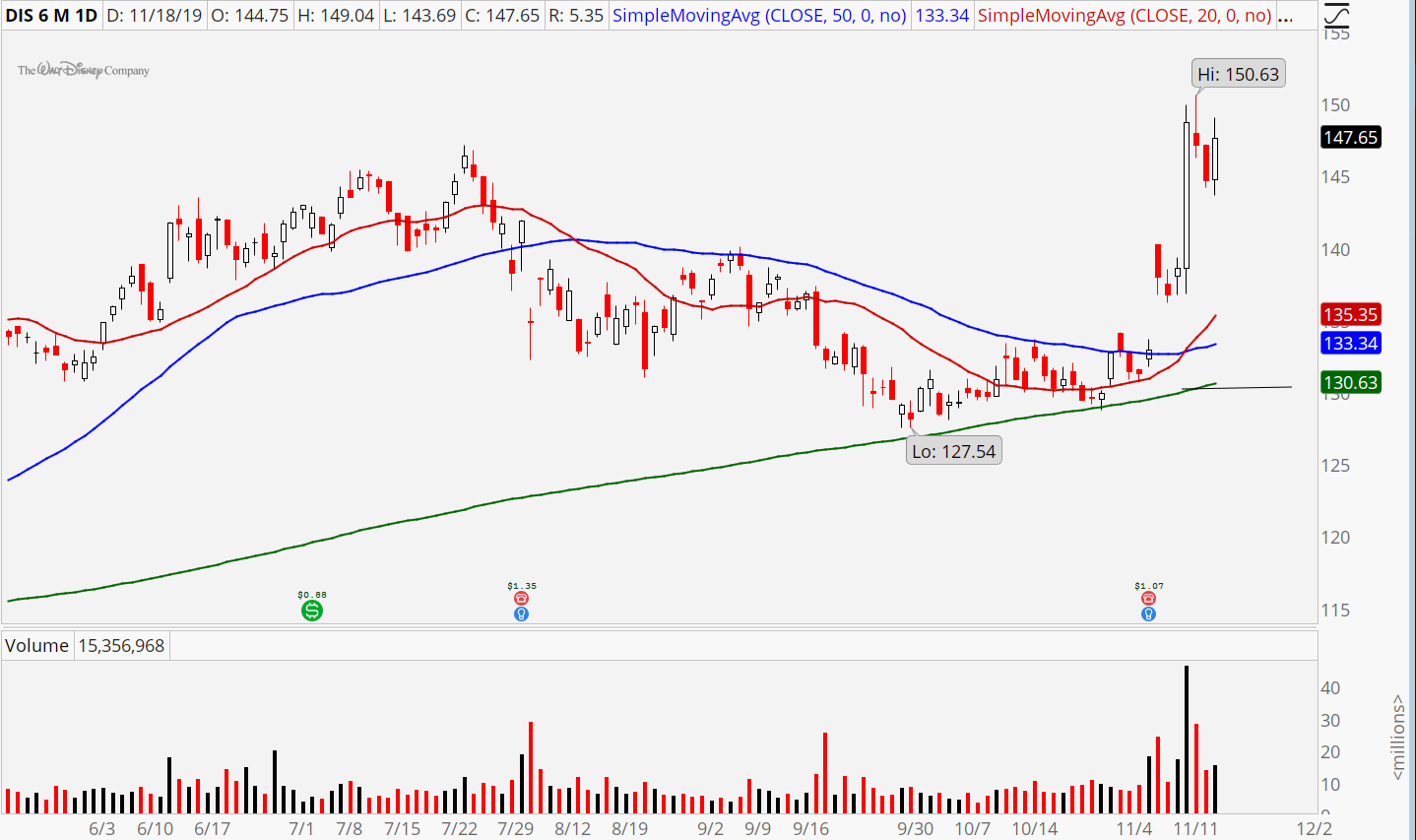 Disney+ is finally here. And shareholders are dancing in the streets at the warm reception. On the first day, over 10 million people signed up for the service. Wall Street’s enthusiasm was on full display with a magical 7% rally launching DIS stock to record highs last week. Approximately 46.5 million shares traded on the session marking the highest volume day since mid-April.

Since then, a slight pullback formed but sellers were only able to drop the stock for two sessions before buyers came roaring back. Monday saw DIS jump 2.1% on increasing volume.

On the options trading front, traders went bananas for call options. Total activity jumped to 178% of the average daily volume, with 342,949 contracts traded. 80% of the trading came from call options alone.

Implied volatility sank to 24% or the 35th percentile of its one-year range. Premiums are baking in daily moves of $2.27 or 1.5%. If you think the strength sticks, selling Dec bull put spreads such as the $140/$135 offer a high probability of profit. 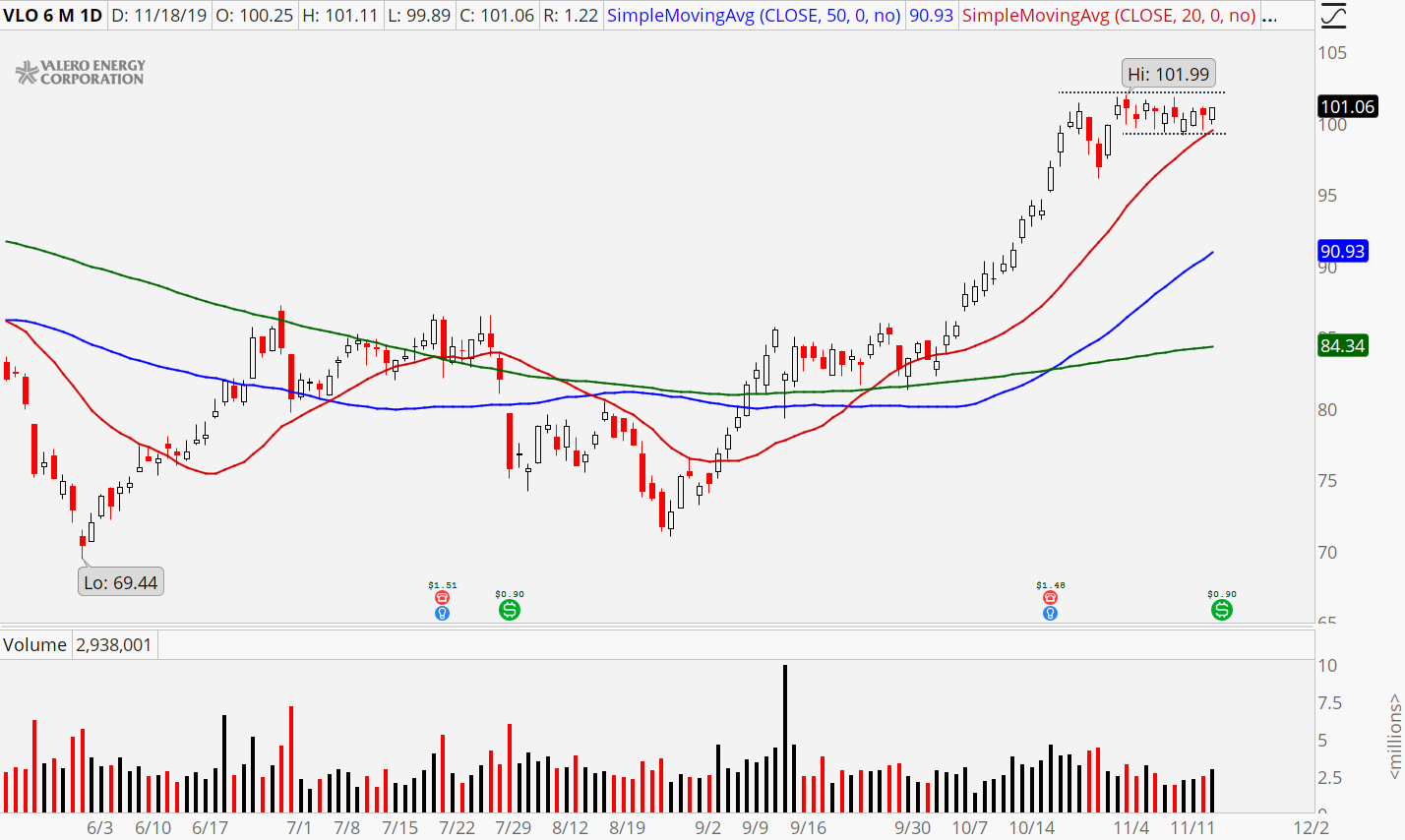 Oil stocks are the red-headed stepchildren of the market. They simply aren’t getting any love whatsoever. And it’s not that there isn’t any affection to be given. Investors are swimming in it right now and have pulled sectors across the board to record highs. But not energy.

Fortunately, Valero has been spared the market’s scorn. It’s one of the few good lookers in the industry with an extremely compelling breakout setup coming into today. A break over $102 is the next tradeable event and could spark VLO stock’s next ascent.

The reason VLO calls shot to the moon on Monday was the looming dividend payment. Traders targeted calls for short-term control of the stock to capture the next 90 cent quarterly payout. The dividend yield is a beefy 3.6% making it compelling versus the alternatives.

Some 97% of the options trading fell on the call side of the ledger. Total activity rocketed to 1,957% of the average daily volume with 192,678 contracts crossing the table. 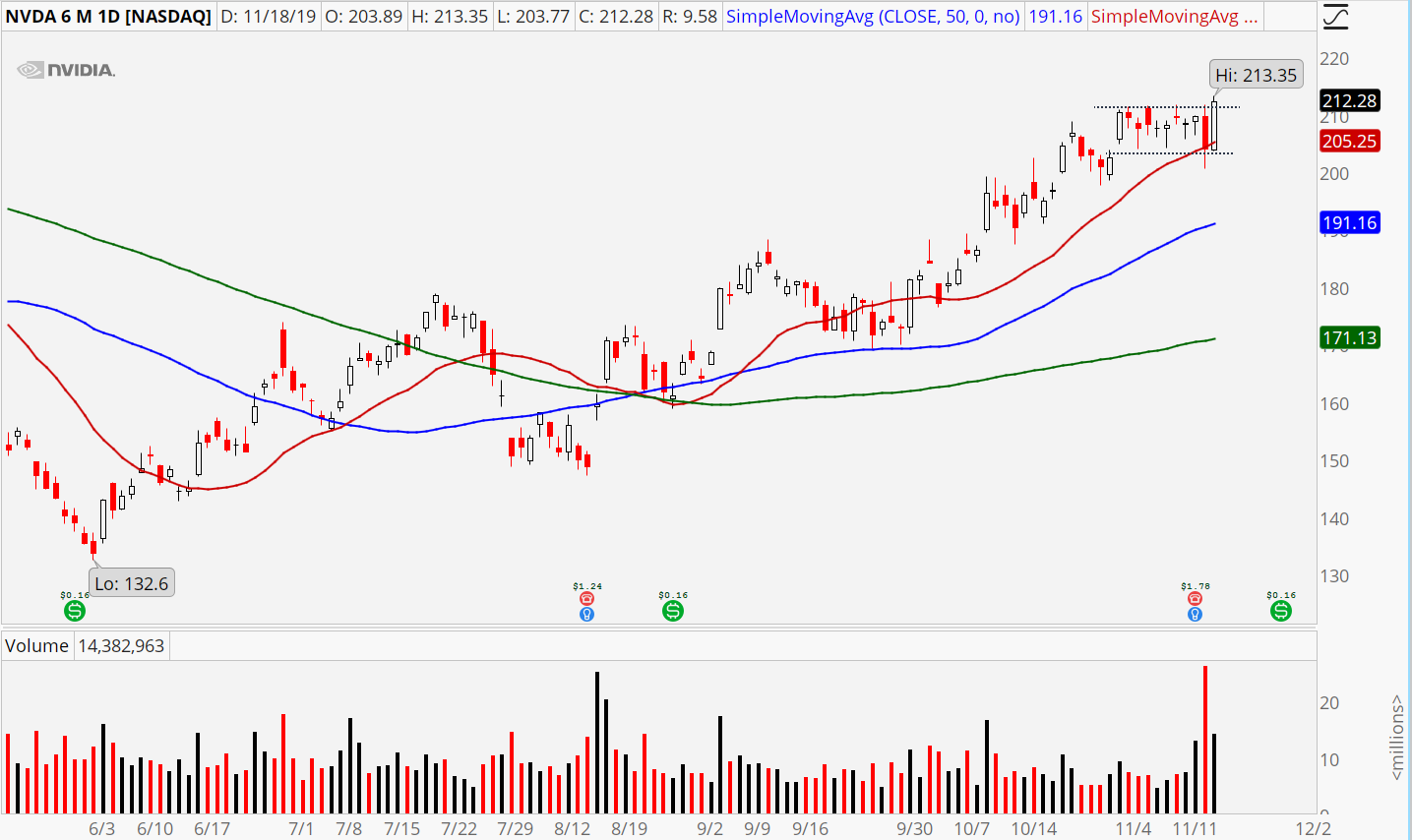 Friday’s slip was quickly reversed on Monday with a rousing bullish engulfing candle. The two-day drop and pop reveals buyers’ willingness to defend the trend and suggest more upside is in the offing. I particularly like the high base that has formed over the past few weeks. It provides a clean entry point on a close over $212 which just happened.

If you’re looking for confirmation from the options trading, you got it. Calls drove 63% of the day’s take which saw total activity swell to 160% of the average daily volume.

The relatively small price range seen after earnings left little reason for implied volatility to remain aloft. So it didn’t. Traders slammed the metric down to 33% or the lowest level of the year. With premiums now dirt cheap, bull call spreads are compelling. Consider buying the Jan $220/$230 bull call spread for around $3.30.

As of this writing, Tyler Craig held bullish positions in DIS and NVDA. For a free trial to the best trading community on the planet and Tyler’s current home, click here!