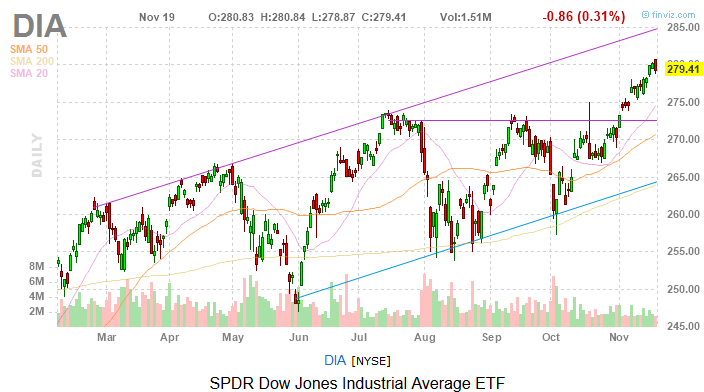 Markets were stuck in a duel between varying considerations today. On one hand, there were new developments on the trade front. On the other, investors had to contend with some disappointment on the earnings and guidance fronts from some well-known brick-and-mortar retailers.

While there was some retail wreckage to deal with, there remain some signs that the long sought after Phase I of a trade deal could be reached between the U.S. and China, the world’s two largest economies.

“The two sides, who are locked in tough — perhaps final — negotiations on a phase-one pact, are discussing linking the size of tariff rollbacks to the preliminary terms set in that failed May deal,” Bloomberg reports, citing unidentified sources familiar with the matter.

Last year, President Trump imposed tariffs on $250 billion worth of Chinese goods exported to the U.S. Reducing or eliminating those levies could go a long way toward jump-starting trade negotiations. The White House appears open to at least reducing some of those tariffs to get the initial part of the trade accord signed.

Let’s have a look at some of the Dow’s winners and losers today, a split that was even with 15 Dow components in each category in late trading.

Honing In On Home Depot

Home Depot (NYSE:HD) was by far the worst-performing member of the Dow Jones Industrial Average today, shedding 5.4%, more than the double the loss incurred by the index’s second-worst performer.

Causes for Tuesday’s tumble in HD stock are easy to spot. The Atlanta-based company said earlier today it expects 2019 sales growth of 3.5%, down from a prior forecast of 4%.

“Our third quarter results reflected broad-based growth across our business, yet sales were below our expectations driven by the timing of certain benefits associated with our One Home Depot strategic investments,” said CEO Craig Menear in a statement. “We are largely on track with these investments and have seen positive results, but some of the benefits anticipated for fiscal 2019 will take longer to realize than our initial assumptions.”

Analysts didn’t overreact to Home Depot’s reduced sales forecast with some saying the weakness was expected and that the shares are still worth embracing.

It has been a little while since Boeing’s (NYSE:BA) last mention in this space, so an update is in order. The stock traded higher early in today’s session, but sold off as the day went along. Today’s price action in Boeing obfuscates some good news for the company.

In recent days, Boeing landed 50 new orders for the controversial 737 MAX passenger jet, which it expects will be airborne again sometime in the coming weeks.

“Thirty are in the form of ‘letters of intent,’ which aren’t firm orders and don’t go into Boeing’s backlog of commercial aircraft. Twenty are firm and go into the backlog. British Airways parent International Consolidated Airlines Group (IAG.London) also signed a letter of intent earlier this year for 200 MAX jets,” according to Barron’s.

Apple (NASDAQ:AAPL) was another Dow loser today, albeit in modest fashion. However, there are some concerns about valuations on the iPhone maker. That is to be expected when a company of Apple’s size surges more than 69% in less than 11 months.

Credit Suisse analyst Matthew Cabral, who has a “Neutral” rating and $221 price target on Apple, “notes that the stock now trades for 20 times calendar 2020 earnings versus a five-year average of 13 times, and a previous peak of 17 times since 2010,” reports Barron’s.

It’s worth noting that expensive stocks can continue soaring and that by some metrics, Apple isn’t all that pricey. For what it’s worth, the stock is one of the largest components in the S&P 500 Value Index.

On light news, Visa (NYSE:V) was the best-performing name in the Dow Jones today, gaining 1.7%. The company had recently been inking agreements with new clients and notes credit and debit card swipes are gaining steam, indicating the U.S. consumer still has some momentum.

During the Sept. 15 and Nov. 14 period, the “number of S&P 500 companies discussing tariffs on Q3 2019 earnings calls during this time is below the number through the same point in time in the second quarter,” according to FactSet research.

In percentage, the tariff mention decrease was 13%.