U.S. stock futures are trimming recent gains this morning. Heading into the open, futures on the Dow Jones Industrial Average and S&P 500 futures are lower by 0.24%. Nasdaq Composite futures have shed 0.35%.

The action in the options pits yesterday leaves little to discuss. The gap between calls and puts held steady with call activity once again leading the charge. Overall volume held near average levels with about 20.2 million calls and 15.8 million puts changing hands on the day.

As for the CBOE Volatility Index (VIX), the single-session equity put/call volume ratio continued its rebound off of last week’s lowest reading of the year. It ended the day at 0.58. Meanwhile, the 10-day moving average treaded water at 0.56 for the third day in a row.

Let’s take a closer look at the hottest stocks targeted by options traders. 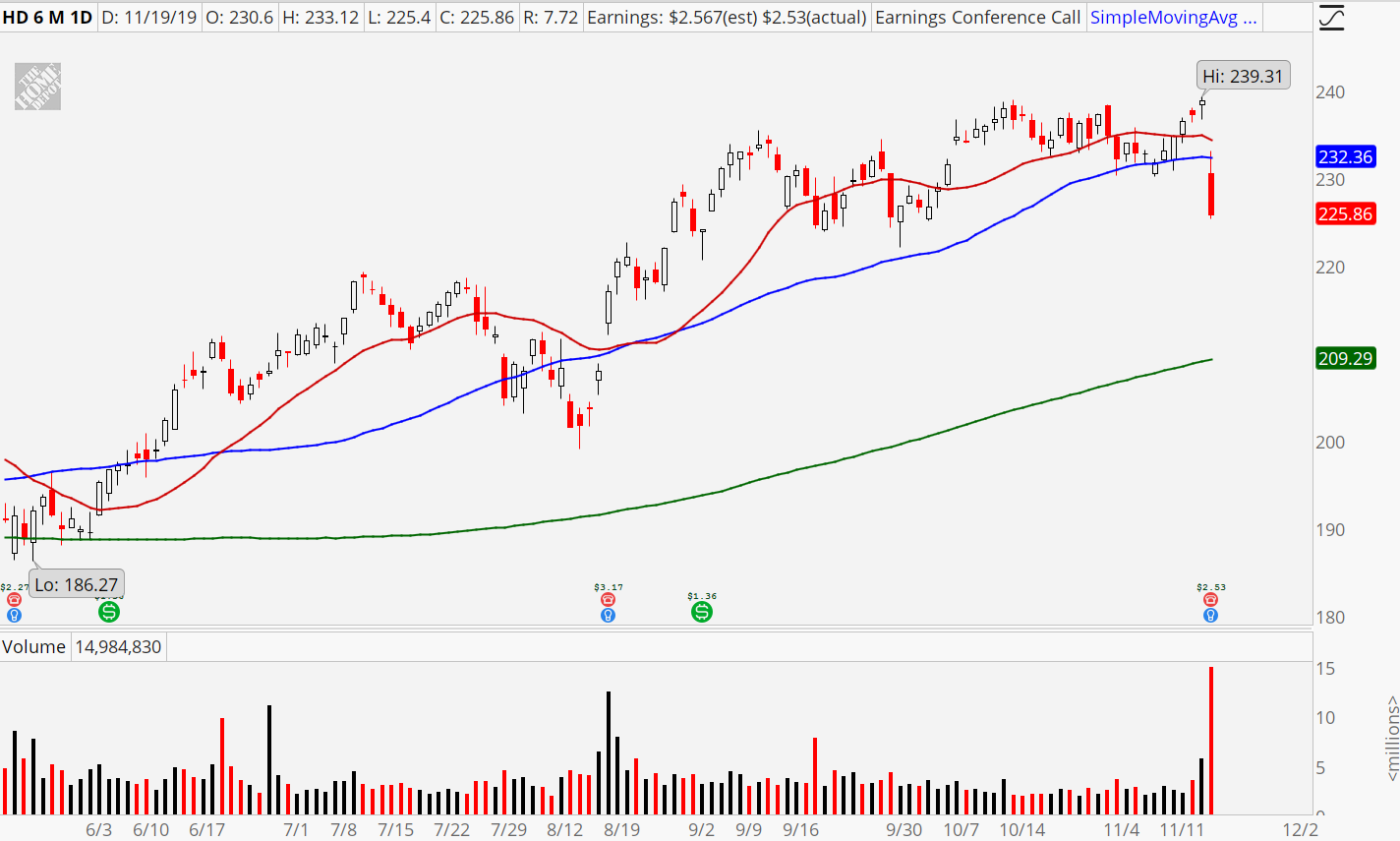 The earnings spotlight turned to retail this week and it’s moving through the sector like a wrecking ball. Home Depot (NYSE:HD) shareholders approached the quarterly report with pockets full of profits and hopes that the uncertain event wouldn’t spoil the fun.

HD stock fell 5.4% on its highest volume day of the year, cracking all sorts of support in the process. The 50-day moving average gave way as did a pivot low at $230. The short-term trend is now pointing lower sending warning signs to chart watchers everywhere. Steer clear of bullish trades for now.

Though the home construction giant topped bottom-line estimates by earning $2.53 per share, its revenue came in light at $27.2 billion versus $27.5 billion expected. Home Depot also slashed its full-year outlook and same-store sales estimates.

That said, Lowe’s (NYSE:LOW) released earnings this morning and is rallying 4.8% after a solid showing, so Home Depot’s lousy performance appears to be unique and not indicative of an industry-wide slowdown.

On the options trading front, calls slightly outpaced puts despite stock bears ruling the day. Activity climbed to 786% of the average daily volume, with 159,048 total contracts traded. 55% of the sum came from calls.

Implied volatility dropped to 18.6% and now sits at the 14th percentile of its one-year range. Premiums are baking in daily moves of $2.64 or 1.2%. 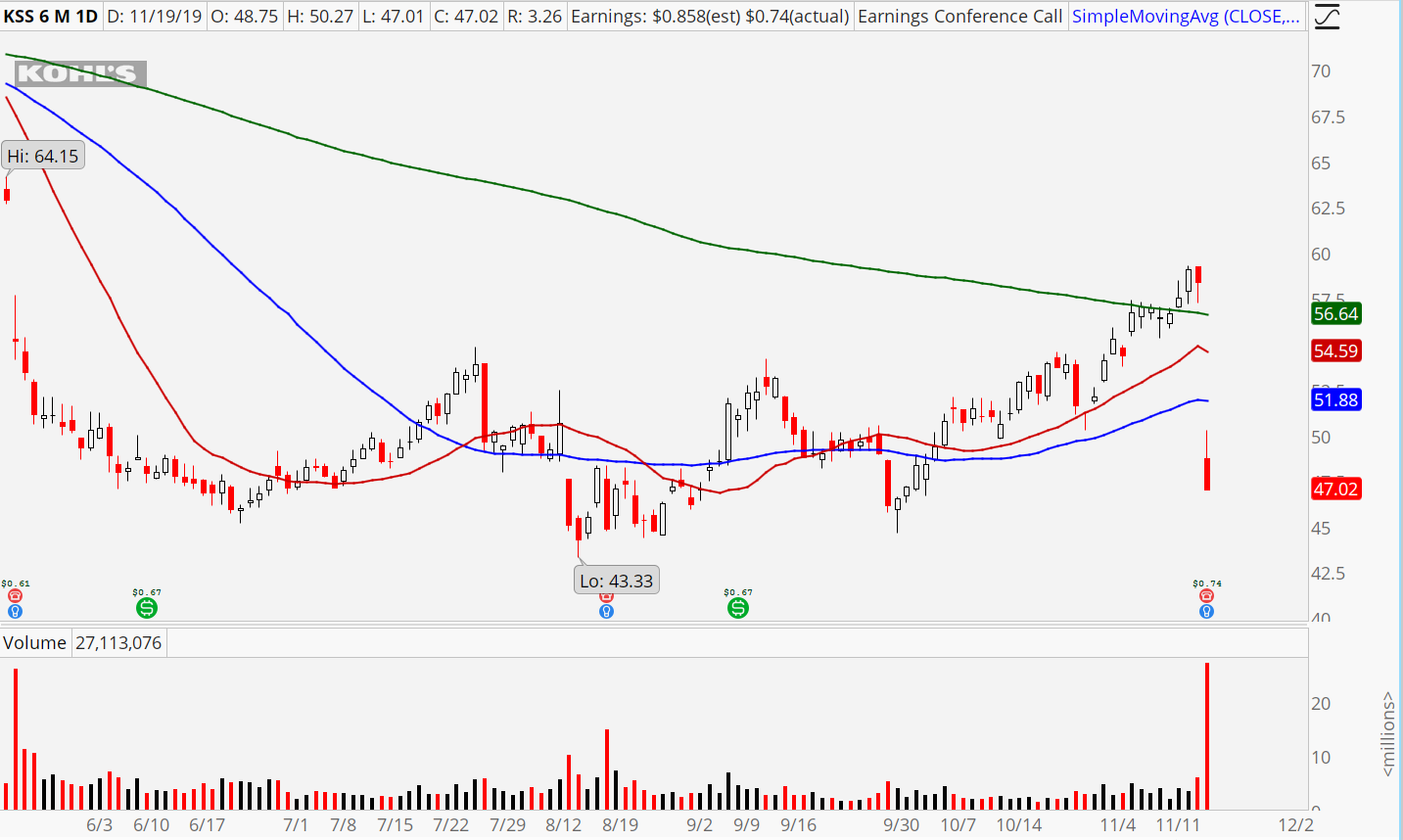 The trend of Kohl’s (NYSE:KSS) shares turned a corner this quarter. Its rebound was sufficient in turning the 20-day and 50-day moving averages higher and it was able to clear the 200-day for the first time since April.

Unfortunately, yesterday’s disappointing earnings report torpedoed its bottoming efforts, sending the stock down 19%. It’s now quickly closing in on its 52-week lows and has an ugly enough chart to scare away buyers for the foreseeable future. Like HD, KSS stock belongs in the “stay away” pile.

Kohl’s missed on the top and bottom line compared to analyst estimates. Same-store sales also whiffed, and to top it off, the company cut its full-year outlook.

On the options trading front, puts were the clear favorite in the session. Total activity zoomed to 625% of the average daily volume, with 111,628 contracts traded. Puts accounted for 60% of the day’s take.

Implied volatility fell to 41% but still remains at the 40th percentile of its one-year range. The expected daily move is $1.21 or 2.6%. 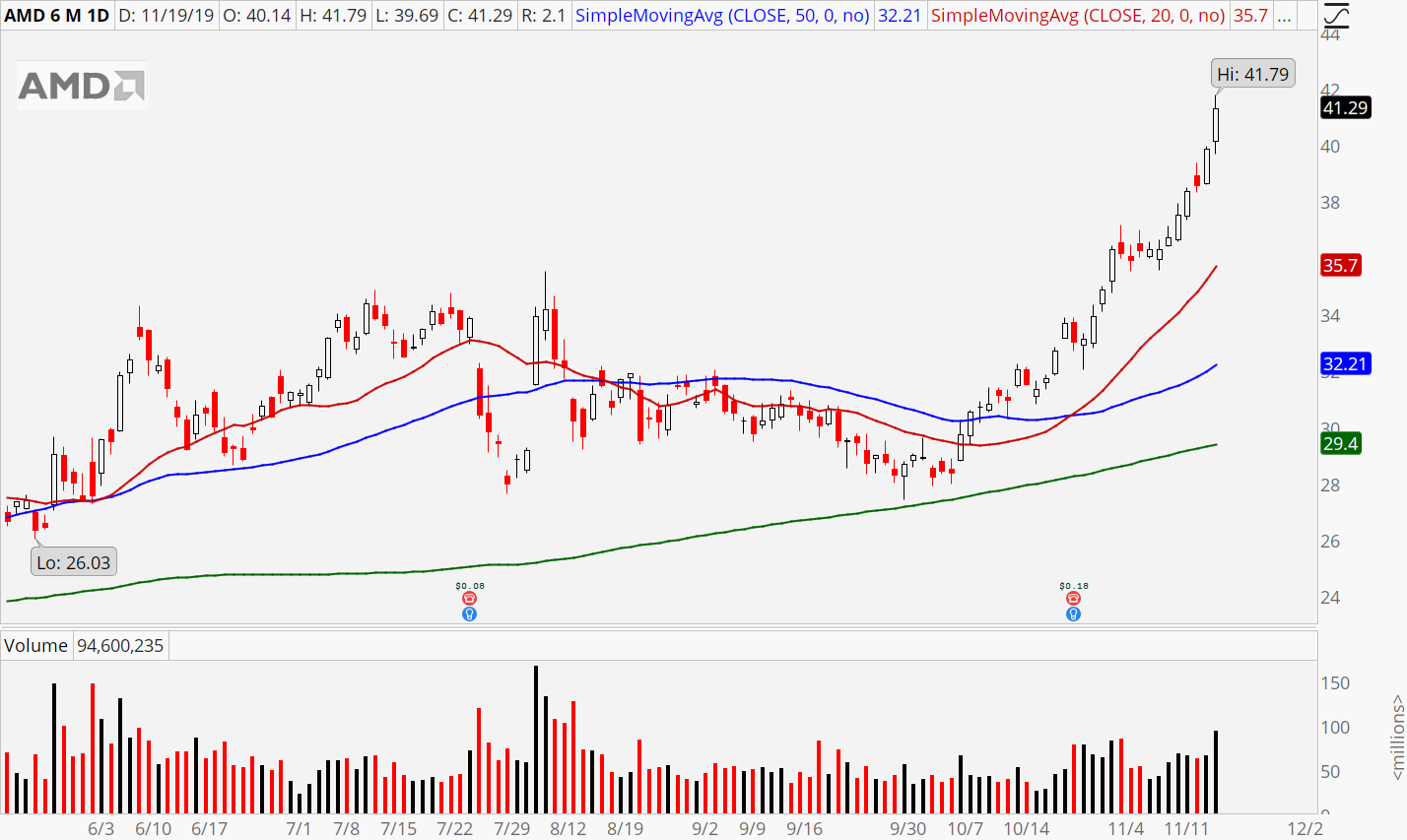 Advanced Micro Devices (NASDAQ:AMD) shares have gone parabolic. The red-hot semiconductor stock notched its ninth consecutive up day and has now gained 33% over the past month. The momentum is feeding on itself, and buyers are swarming.

If you’re wondering if you should chase the runaway train, I suggest caution. A pause or pullback is likely and the risk-reward balance that accompanies such a lofty entry is not appealing.

On the options trading front, traders came after calls with a vengeance. By day’s end, 857,270 contracts had crossed the table pushing the total to 261% of the average daily volume. Puts were the clear victor and accounted for 74% of the tally.

The increased demand drove implied volatility higher on the day to 46% placing it at the 15th percentile of its one-year range. Premiums are baking in daily moves of $1.19 or 2.9%.