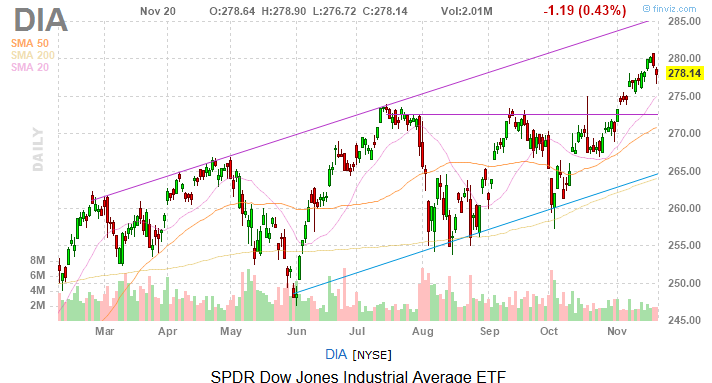 The slow slog of the U.S.-China trade deal hampered stocks Wednesday, sending all three of the major domestic equity benchmarks lower on the day.

When it comes to the trade wranglings, at least two prominent themes are hindering stocks. First, the sheer amount of time it’s taking to get a deal done. Phase I of the trade accord was supposed to be settled earlier this month, but now it looks like Dec. 15 is the target date.

Second, there are dueling views on the state of the talks themselves. Some market observers view the situation as sanguine, while others see plenty of tensions lingering.

“Some people close to the talks describe them as being in a sensitive, make-or-break stage and caution that what President Donald Trump proclaimed as a done deal a month ago, sending U.S. stocks soaring to records, could still easily fall apart,” reports Bloomberg.

Those competing views and frequent postponements have created an aura of uncertainty. The markets dislike this uncertainty, as reflected by the fact that just nine Dow components were higher in late trading.

Some Juice For JNJ

Johnson & Johnson (NYSE:JNJ) was the leader of the Dow today. Shares of JNJ were boosted after Cantor Fitzgerald analyst Louise Chen initiated coverage of the stock yesterday with an “outperform” rating and a $160 price target.

JNJ has been a Dow laggard this year, as it has been hampered by fears of opioid-related litigation costs. But investors may have over-exaggerated those fears. As Chen notes, the company’s pipeline offers room for growth.

An Interesting Day For Oil

That’s a credible catalyst, but the strength in shares of Exxon is arguably surprising because Moody’s Investors Service lowered its credit rating on the oil giant, citing “cash burn” concerns.

The dividend is one of the primary reasons investors have stuck by Exxon stock and the company may be loathe to cut it.

Today’s lift of Dow losers, of which there many, featured a predictable cabal of trade-sensitive fare, such as Apple (NASDAQ:AAPL), Intel (NASDAQ:INTC) and 3M (NYSE:MMM), among others.

Home Depot (NYSE:HD) followed up yesterday’s 5.4% tumble with a slide of 2.2% today after rival Lowes (NYSE:LOW) reported decent quarterly results that sent that stock higher by nearly 4%. Looming Black Friday promotions and the rest of the holiday shopping season stand as tests for both home improvement retailers.

While trade will continue commanding headlines over the near term, it may take a step back Thursday simply because several marquee economic data points are due. In addition to a broad swath of retailers reporting earnings (no Dow components), the Philadelphia Federal Reserve manufacturing index for November will be reported along with October’s existing home sales.

“Economists are estimating 5.46 million U.S. homes sold in October, according to Dow Jones. This is after U.S. home sales unexpectedly fell to 5.38 million in September, following two months of gains,” according to CNBC.