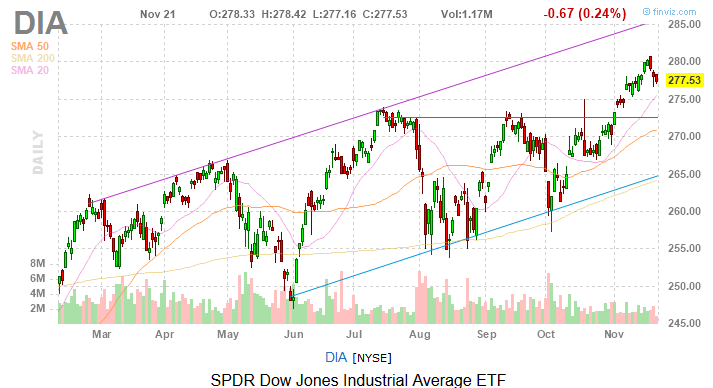 It has been a familiar theme for several days now, but mixed messages on the trade front weighed on stocks Thursday, as did some diverging signals from retail earnings reports.

As he’s prone to do, President Trump threw a curveball at the trade talks. Congress recently passed legislation backing the Hong Kong protesters, a group not in favor in Beijing, and the president is mulling signing that bill. That news comes as one of China’s trade negotiators expressed some optimism over the talks.

To go along with the geopolitical issues, investors had to contend with the retail sector today. Target (NYSE:TGT), in modest fashion, followed through on yesterday’s post-earnings epic gain, but Macy’s (NYSE:M) faltered after revealing a gloomy outlook. Neither stock is a member of the Dow Jones Industrial Average.

Overall, it was a day of split decisions and that much was reflected in 15 of the Dow’s 30 components being higher in late trading, while 15 were in the red.

Oil giant Exxon has seen some play in this space this week and with good reason. As I noted yesterday, XOM stock traded higher, perhaps surprisingly so, after Moody’s Investors Service expressed concern about the company’s ability to conserve cash.

Exxon, widely viewed as a value/high dividend play, may or may not have acknowledged those concerns from Moody’s, but the company did say today it’s looking to sell up to $25 billion of oil and gas fields in Europe, Asia and Africa.

That $25 billion figure is well above the $15 billion in divestments the company was expected to do by the end of 2021.

“The new plan would also see Exxon significantly pare back operations in Southeast Asia with the sale of its assets in Indonesia and Malaysia, the sources said,” according to Reuters. “In Africa, Exxon wants to sell its operations in Chad, Equatorial Guinea as well as parts of its Nigerian assets.”

Disney (NYSE:DIS) was one of the losers on the Dow Jones today, but that isn’t likely to be an ongoing condition. As was noted last week, the company’s new Disney + streaming service signed up 10 million subscribers on its first day.

Many came by way of Verizon (NYSE:VZ), giving the service away for free to its customers for a year. Disney hasn’t commented on exactly how many of the 10 million are actually paying for Disney + right now.

Bernstein analyst Todd Juenger isn’t getting caught up in that speculation and raised his price target on Disney shares to $137 from $130 today.

“In the very extreme case, one could go so far as to argue that, basically, everybody who will ever be interested in signing up for Disney+ will do so in the first couple of years (which would be a massive initial burst of subscribers),” he said in a note cited by Barron’s.

Fortunately, I’m not talking about Microsoft (NASDAQ:MSFT) missing earnings or revenue targets. However, the company did say today that the launch of its new Surface Earbuds will be postponed until spring 2020.

That means the product won’t be available for the holiday shopping season. That’s definitely a missed opportunity and one that’s good news for Apple (NASDAQ:AAPL), the dominant name in the wireless in-ear audio market.

Shares of Microsoft traded slightly lower on the news.

The past couple of days haven’t been great for stocks, but the losses haven’t been alarming, either, suggesting the environment could still be ripe for some risk taking.

“Putting it all together, we are becoming increasingly comfortable with incremental risk positioning during the fourth quarter,” said BlackRock in a note out earlier today. “Specifically, we like upside equity convexity, relative to pervasive negative sentiment, and think that corporate buybacks are still so powerful.”