U.S. stock futures are climbing higher this morning as buyers fight to end a three-day losing streak. Ahead of the bell, futures on the Dow Jones Industrial Average and S&P 500 are higher by 0.19%. Nasdaq Composite futures have added 0.23%.

Thursday’s movement in the options market saw call volume sink to its lowest reading in weeks, which pulled overall volume back below-average levels. Only 17.6 million calls and 15.1 million puts changed hands on the session.

However, the ebb in call trading didn’t translate over to the CBOE Volatility Index (VIX), where the single-session equity put/call volume ratio slipped back to 0.59. Meanwhile, the 10-day moving average edged higher to 0.57. 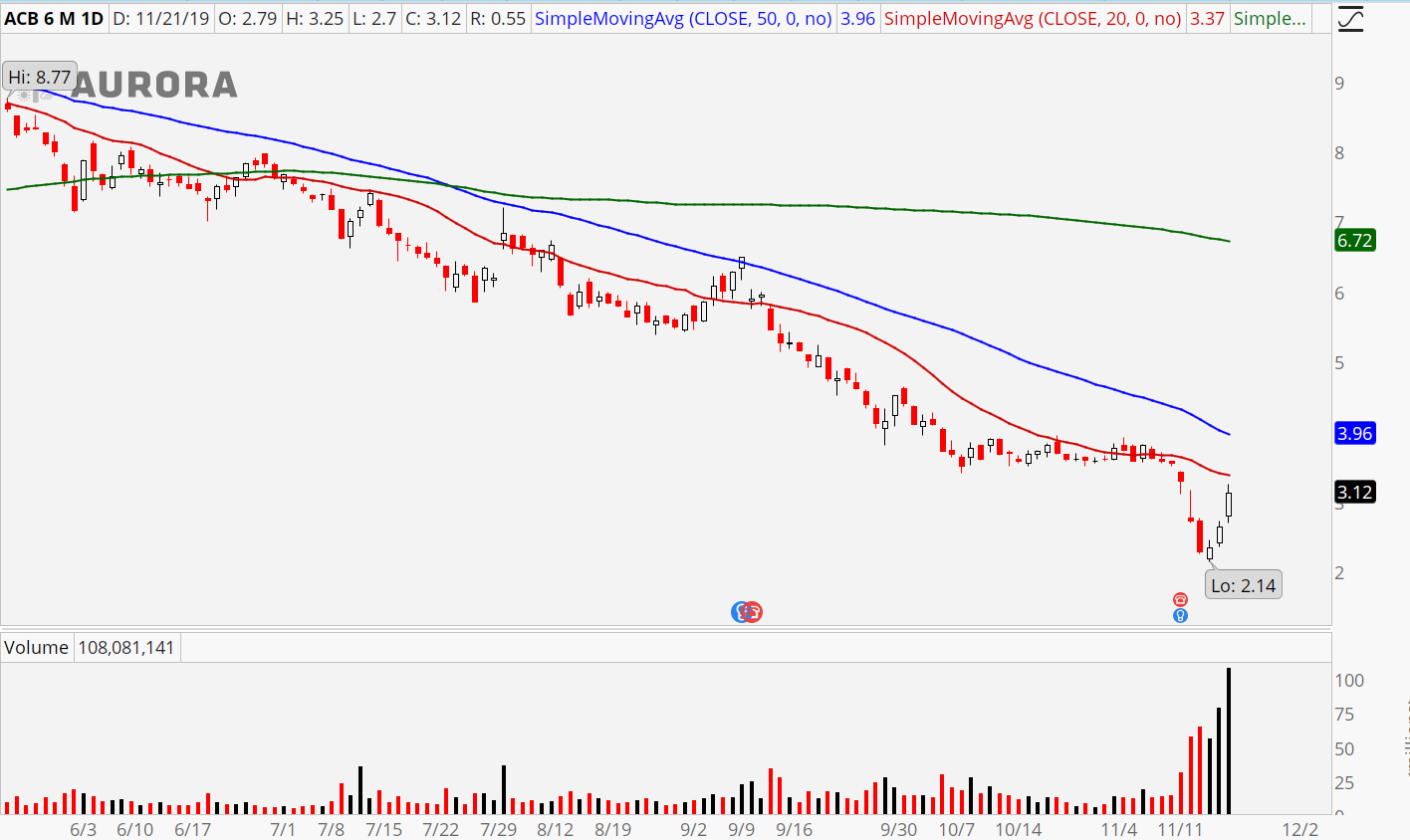 Marijuana stocks got a shot in the arm this week when buyers finally swarmed in search of a bargain. Many have reached such lowly levels that the slightest whiff of optimism has buyers rushing in and short-sellers running for cover. ACB stock rocketed 18.2% on its second highest volume session of the year. Over 108 million shares changed hands.

But here’s what’s crazy. Even with the buying bonanza, ACB still hasn’t even returned to its falling 20-day moving average. Which says something about how desperately oversold the shares had become.

As exciting as this week’s rise has been, it hasn’t changed the trajectory of the downtrend at all. No resistance zones have been broken and no moving averages have been breached. Until we see further evidence of a bottom in the trend, I’m skeptical of the bounce’s staying power.

The action on the options trading side of things was as you’d expect. Calls led the charge, driving 64% of the day’s activity. The total daily volume shot to 569% of the average, with 340,423 contracts changing hands.

Implied volatility is on fire at 141% or the 86th percentile of its one-year range. Premiums are pricing in daily moves of 28 cents or 9%. 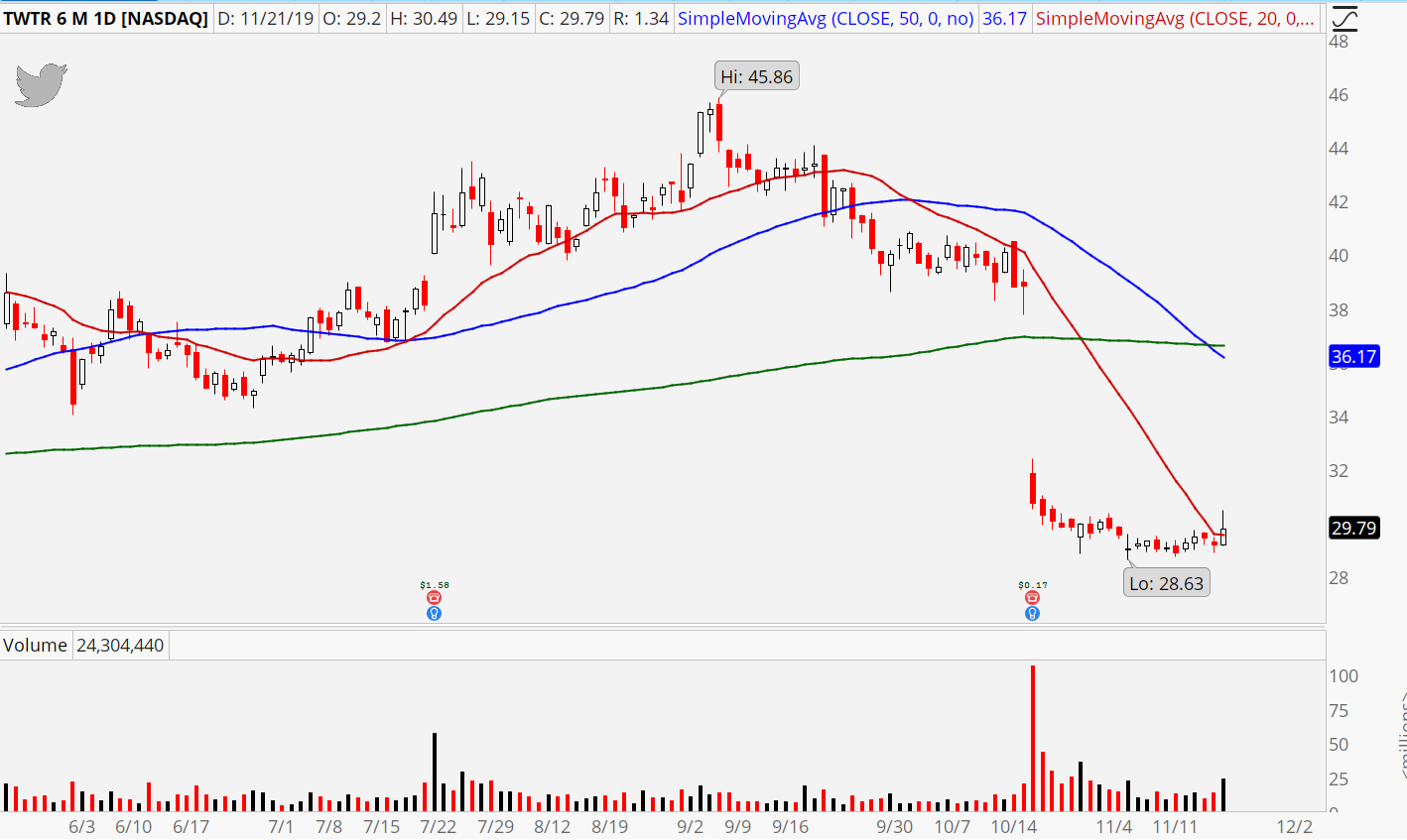 Twitter shares took flight Thursday, rising as much as 4% before sellers emerged to pare the gains to 2.1% on the day. The rally marks the second major sign of bulls returning to the wounded blue bird for some old fashion bottom fishing. TWTR stock has been plumbing the depths ever since getting demolished on disappointing earnings

Since peaking at $45.86 in mid-September, TWTR shares have fallen 35% and were closing in on their lowest levels of the year before yesterday’s bounce back. Downside momentum has slowed in recent weeks so we did have evidence that the selloff’s strength was waning before Thursday’s pop.

On the options trading front, call volume dominated the session, accounting for 84% of the take. Total activity pushed toward twice the average daily volume, with 250,983 contracts changing hands.

The increased demand lifted implied volatility up to 34% placing it at the 12th percentile of its one-year range. Premiums are baking in daily moves of 65 cents or 2.2%.

If you think the bottoming action continues, then naked puts offer a high probability of profit. Sell the Jan $27 puts for 50 cents. 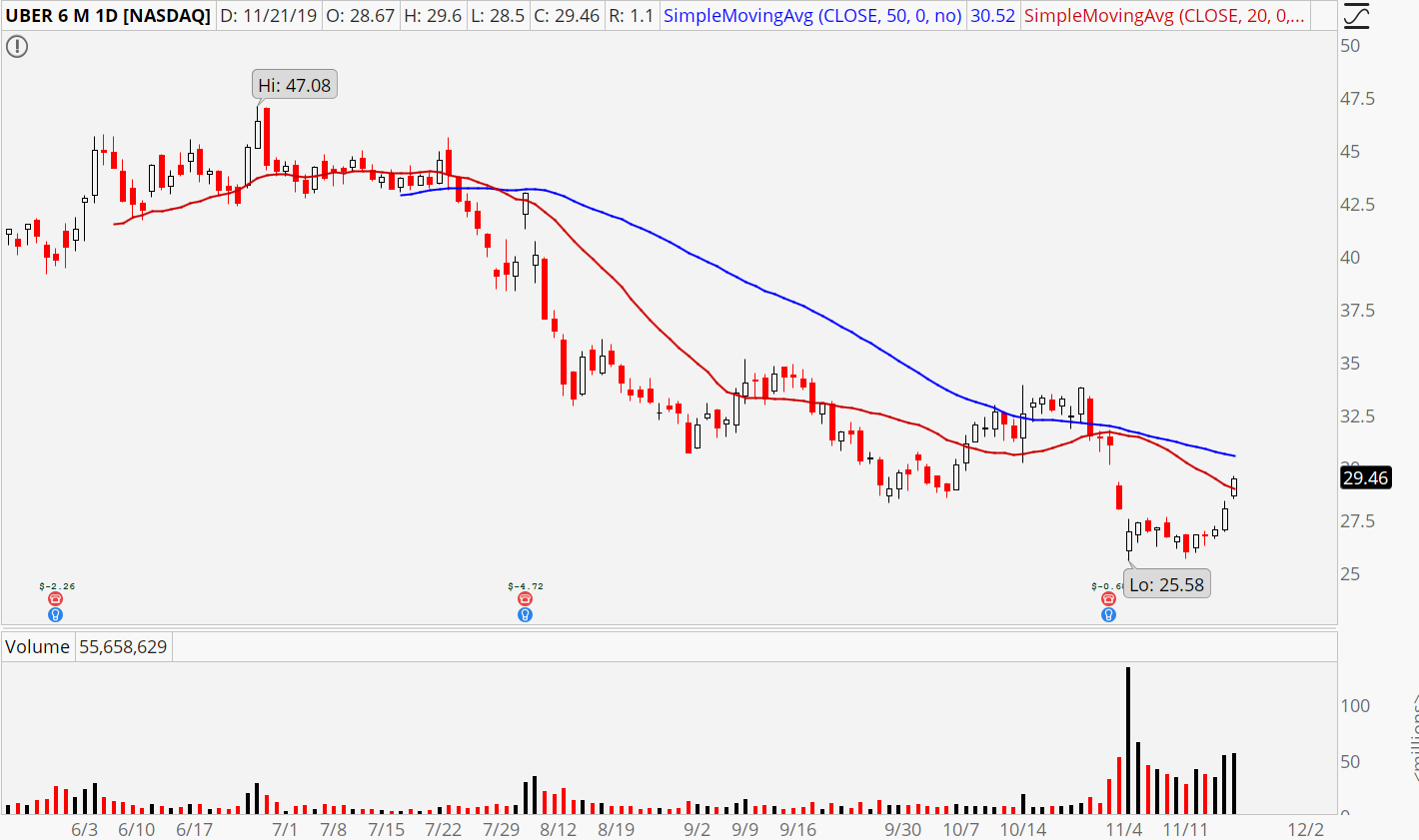 Uber and Lyft (NASDAQ:LYFT) both saw heavy buying Thursday, rising 5.1% and 6.4%, respectively. Of the two, LYFT stock has a better looking chart, but due to the groundswell in options trading, UBER commands our attention today.

This week’s rally marks the first major rebound attempt for UBER stock after its post-earnings collapse. Volume patterns make me optimistic for the snap back’s chances, but much work remains before the downtrend is officially reversed. I suggest keeping your bullishness in check until UBER can take out the 50-day moving average and start carving higher highs and higher lows. LYFT’s stock chart shows a more mature bottom in place by contrast.

Put premiums remain pumped, so selling them is my strategy of choice if you’re willing to bank on a bottom here. Sell the Dec $28 put for around 80 cents.