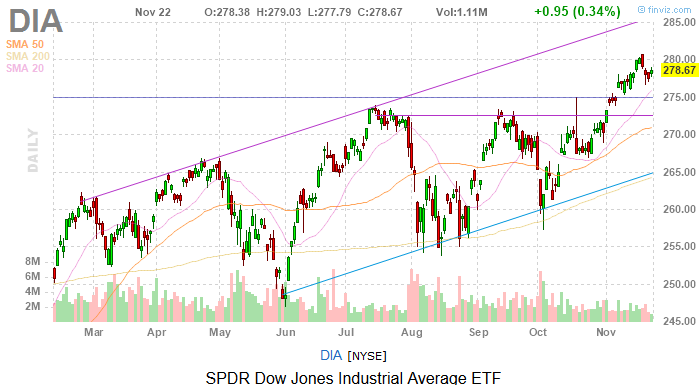 Markets got some trade relief to close the week as the three major benchmarks climbed higher following comments from President Trump that the U.S. and China are inching closer to signing Phase I of a trade deal.

Trump, as he often does, said China wants and needs the trade deal more than the U.S., indicating that’s the impetus for reaching terms on the first part of the accord.

“Chinese Vice Premier Liu He has invited Robert Lighthizer to Beijing for further talks later this month, according to people familiar with the matter, and Washington will likely postpone new tariffs scheduled for December even if there’s no deal by then, the South China Morning Post reported,” according to Bloomberg.

The president’s comments may or may not qualify as clarity, but in a week in which trade loomed larger than many investors would have preferred, it was good to go out on a strong note thanks to positive trade musings.

In late trading, 22, or more than two-thirds, of the Dow’s 30 components were trading higher with each of the index’s healthcare components in the green.

Pfizer was the best-performing member of the Dow today, a welcome respite for one of the index’s worst-performing names in 2019. A positive article in Barron’s did the trick for Pfizer shares today.

The article notes that investors may not be appreciating Pfizer’s efforts to shed its consumer products unit and merge its off-patent business, Upjohn, with Mylan (NYSE:MYL). As a result, the stock is attractive relative to some blue-chip pharmaceuticals rivals, including fellow Dow component Merck (NYSE:MRK).

“Pfizer is clearly set to be a different sort of investment than it was before the spinoff,” reports Barron’s. “The company is splitting the dividend proportionally between Pfizer and the generic-drug spinoff, and executives have said they expect that dividend increases, which have been steady in recent years, will slow in the near term. Can Pfizer go from being an income play to a growth story?”

Pfizer wasn’t the only Dow healthcare stock trading higher today. The sector, a laggard for much of this year, has recently been building some momentum. Johnson & Johnson (NYSE:JNJ) gained more than 1% today, while MRK failed to climb higher with some market observers citing ebbing political pressure on the group as the fuel for a late-year healthcare rally.

That assessment has some validity.

“Healthcare stocks rallied sharply on Friday after U.S. Senator Elizabeth Warren, one of the top Democratic presidential contenders and a Medicare for All proponent, revealed how she would implement her healthcare plan,” reports Reuters. “It included a timeline that would initially retain many aspects of the current system, including employer-based private insurance, while transitioning Americans to the government health plan that currently primarily covers individuals 65 and older.”

Boeing (NYSE:BA) is back thanks to gain of 1.3%, putting it in the upper tier of Dow stocks today.

This might be surprising because the Dow’s largest constituent may have to push back the January timeline for getting the 737 MAX passenger back in the skies.

A report in Gulf News suggests the U.S. Federal Aviation Administration (FAA) isn’t committing to January and that the end of the first quarter is a more reasonable expectation.

When Sorry Doesn’t Cut It

Intel (NASDAQ:INTC) lost about 1% today, making it the Dow’s worst performer. Earlier this week, the company had to apologize to customers for PC chip shortages. Headlines like that are, of course, bad for the company behind them, but it can lead to upside for rivals, particularly in the intensely competitive semiconductor space.

With earnings season in the books for Dow components, some material I located today may prove interesting/instructive as it pertains directly to the 30 Dow stocks. It’s about earnings reporting, as in GAAP vs. non-GAAP with the former generally being preferred by analysts but both being used by some companies.