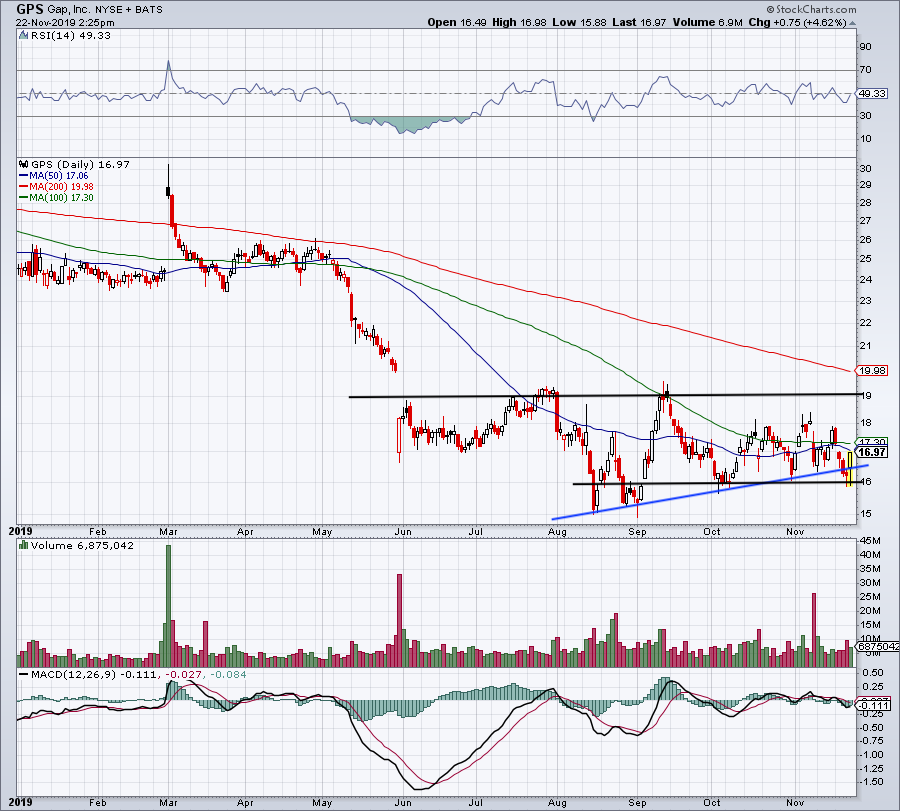 On Wednesday, investors were introduced to some volatility as trade-war worries escalated. However, those fears didn’t follow through much on Thursday or Friday, as the indices were relatively calm. Here’s a look at a few top stock trades to get ready for next week.

After earnings yesterday, Gap (NYSE:GPS) started today’s trading by dropping, but the stock rebounded and moved higher on Friday.

By rebounding in the manner that it did, GPS stock cemented a level of support worth keeping an eye on. That comes into play at $16. That was roughly the low from Thursday, too, and a look at the daily chart reveals the significance of this mark over the past few months.

Bulls who are long GPS need to see shares hold up over this mark. Below can usher in more selling, potentially down to the 52-week low.

On the upside, the 50-day and 100-day moving averages are current resistance. Above those marks and a run to $19 is possible. 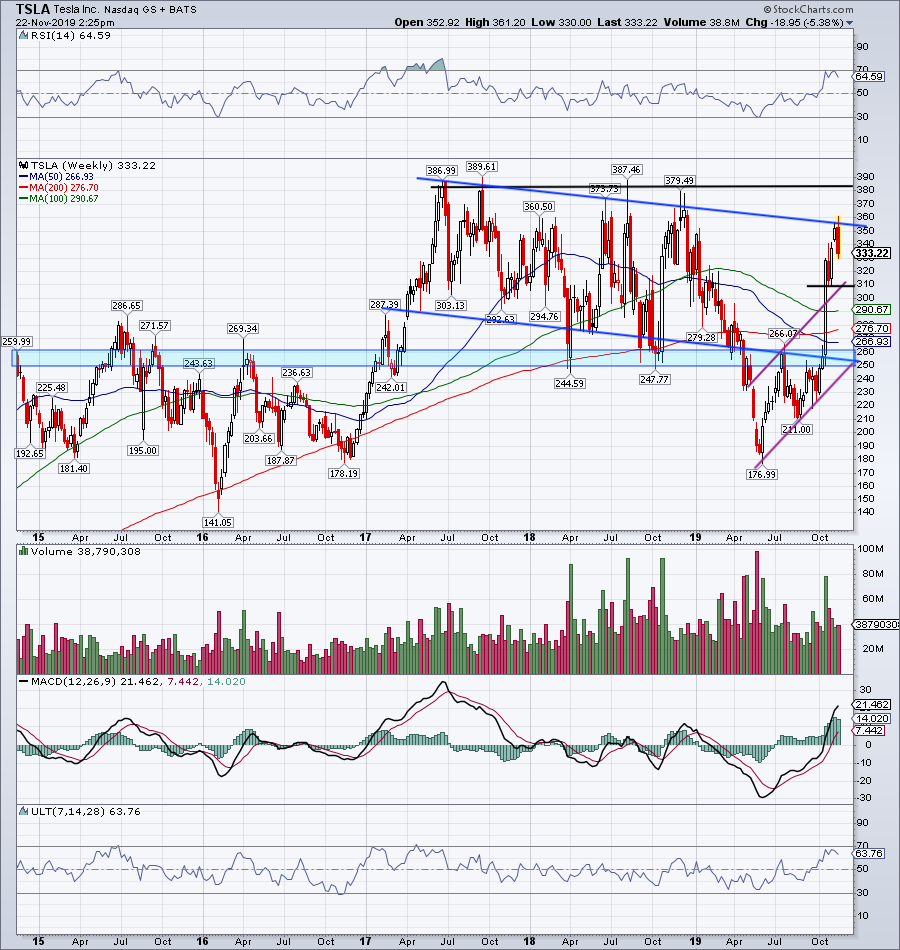 How interesting has Tesla (NASDAQ:TSLA) been in 2019? On Thursday evening, the automaker introduced its new pickup, the Cybertruck. To say the reviews have been mixed so far would be putting it kindly.

With less than an hour left in the session, shares were down more than 6%. Above is a weekly chart, which does not show the 20-day moving average. However, if it were shown above, you’d see TSLA stock knifing through this mark at $335.65.

If bulls can reclaim this mark and stabilize the stock price, then perhaps a rebound can ensue. Over $360 puts $380 on the table. However, this stock went up $100 per share in just a few weeks — an unwind should be expected to some degree.

If we get a larger pullback, it’s important to give TSLA stock time to settle down and see where support comes into play. Is that near former channel resistance (purple line)? How about around $310, a post-earnings consolidation zone?

There are too many question marks with this chart, but one thing is clear: Tesla stock made a pivotal move on Friday, and that means it needs time to digest that move. 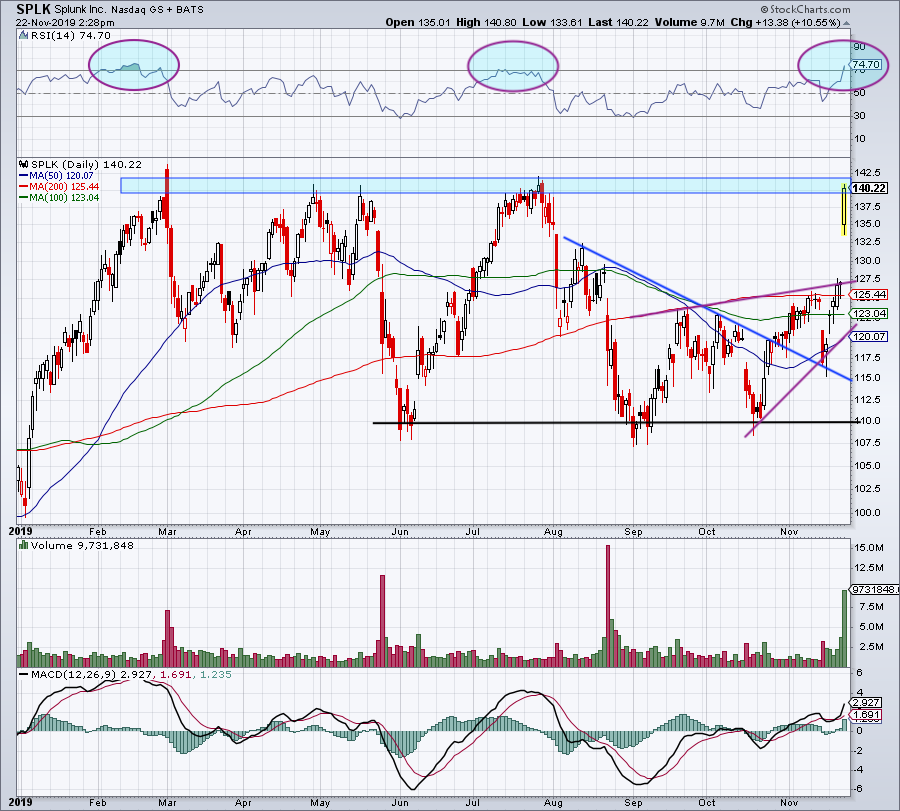 Splunk (NASDAQ:SPLK) stock is exploding higher, up about 10% after better-than-expected earnings. However, shares are running into a tough area of resistance.

This mark comes into play between $140 to $142.50. Over this mark and SPLK stock can break out. Should resistance hold steady, we need to see where SPLK stock firms up on a pullback.

Below Friday’s low and a move down to $128 is possible. Let’s see if we can get a shallow pullback and/or a sideways consolidation before pushing through resistance. 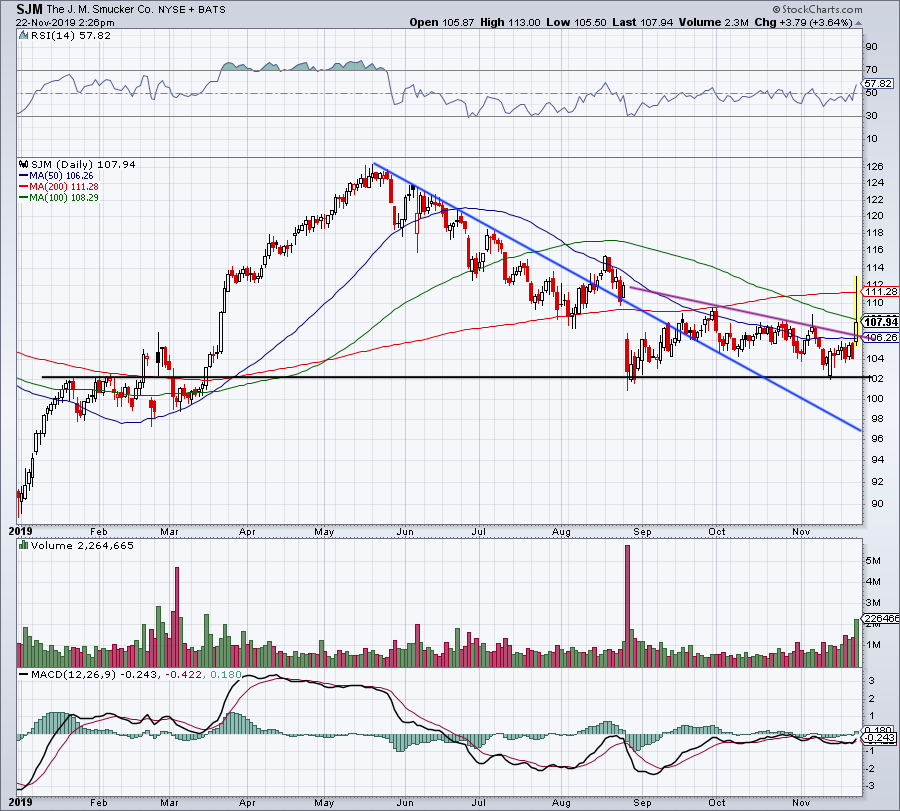 In September, J.M. Smucker (NYSE:SJM) broke out over downtrend resistance (blue line). However, that didn’t kickstart a huge bullish breakout. Instead, shares continued to tread water until reporting earnings on Friday.

The move initially sent shares up to $113, launching the stock over another downtrend resistance mark (purple line) and all of its major moving averages. Man, it looked like a powerful move was being made.