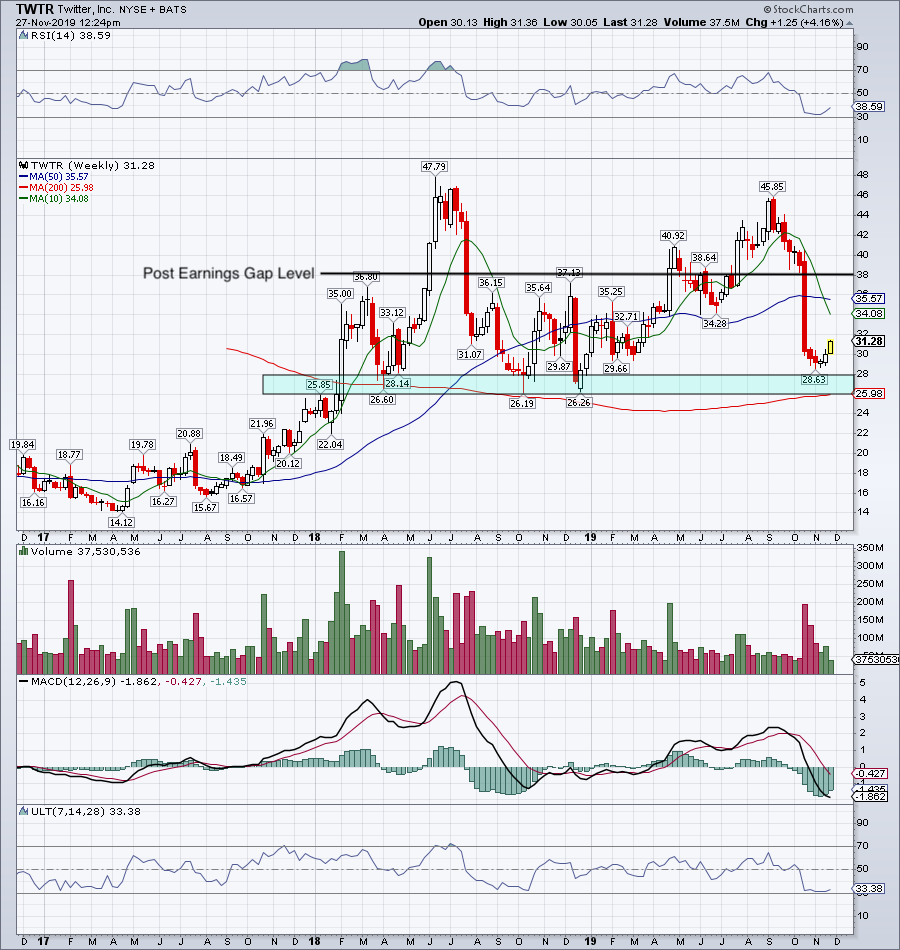 Wednesday marked the last full trading session of the week, as the stock market is closed on Thursday for Thanksgiving and is only open until 1 p.m. ET on Friday. Let’s look at a few top stock trades ahead of the holiday.

After several weeks of bottoming near $29 to $30 per share, Twitter (NYSE:TWTR) stock is starting to catch investors’ attention.

If it can continue its recent momentum, look for a rally up to the declining 10-week moving average. Above that and the 50-week moving average is in play near $35.50. Should TWTR stock rampage even higher, the post-earnings gap fill would push shares up toward $38.

I would have liked to get TWTR shares a bit cheaper than the recent low, where the stock bottomed out at $28.62. Between $26 and $28 would have been a better risk/reward, and it helped that the 200-week moving average is in play at $25.98.

Perhaps we will still get a chance to buy Twitter there in the future, but it doesn’t look like it will happen anytime soon. For now, see if it can climb to the 10-week moving average. 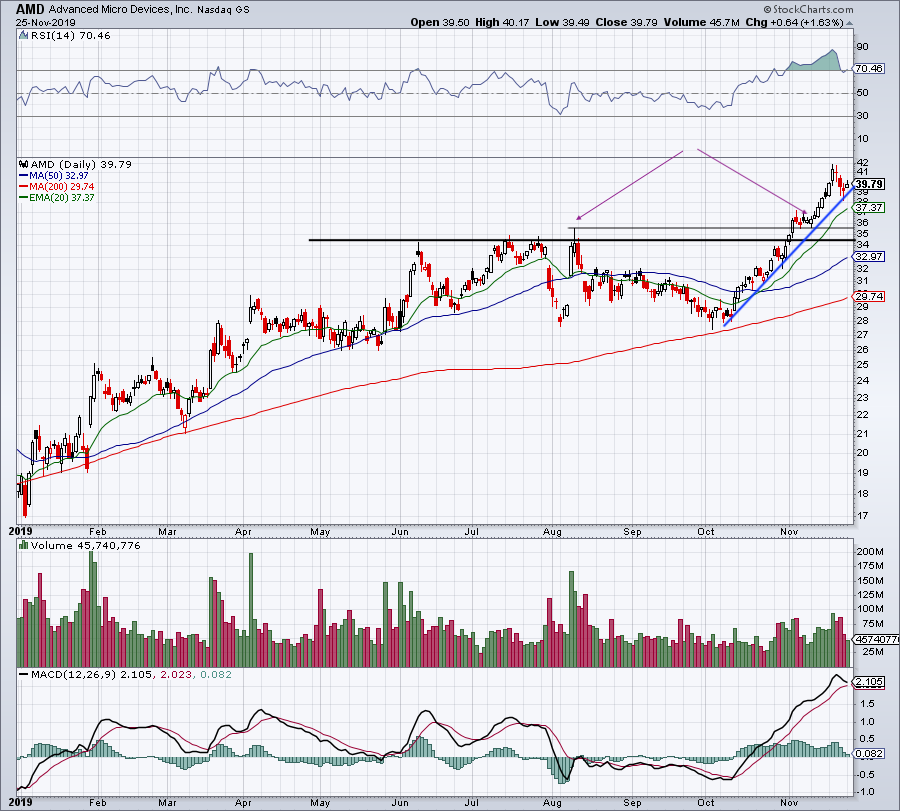 Advanced Micro Devices (NASDAQ:AMD) has been one of the hottest stocks out there, rallying more than 50% from its recent low to its recent high in less than two months.

Uptrend support (blue line) is steep, but it’s in play near $39 now. If it holds, look to see if AMD stock can rally back up to its highs at $42, where it failed at this mark twice last week. Pushing through could launch it on another momentum-fueled rally.

If uptrend support fails and AMD stock moves lower, see if the 20-day moving average buoys the name. If it doesn’t, a retest of former resistance between $34.30 and $35.50 could be in the cards (and would be healthy, honestly). 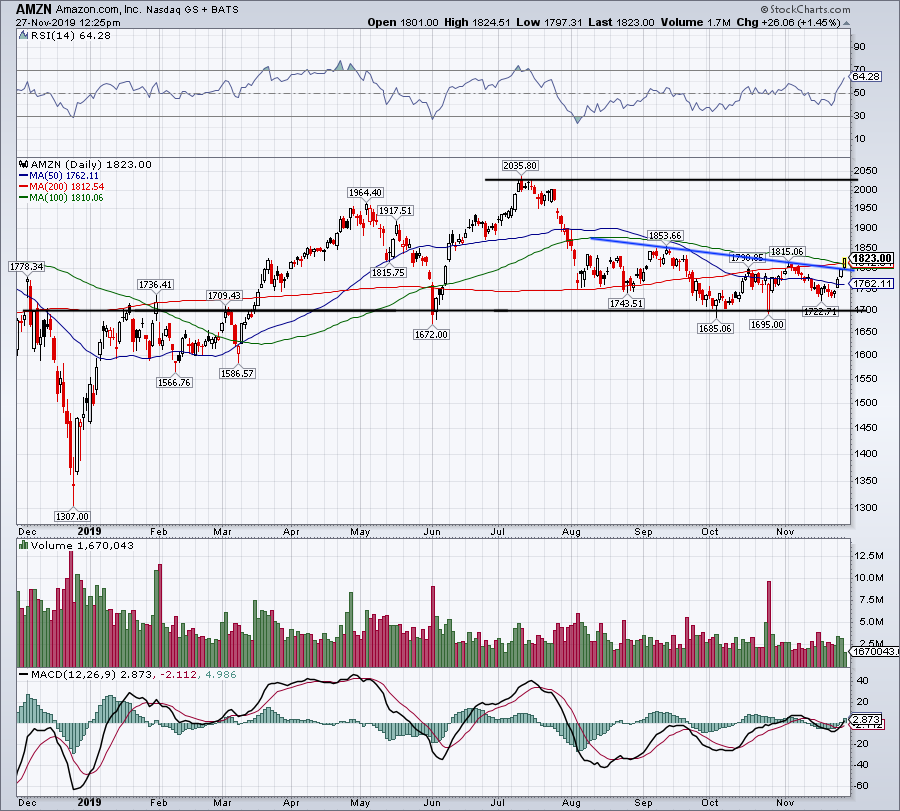 Where has this Amazon (NASDAQ:AMZN) rally come from? One of the worst-performing FAANG candidates so far this year, this stock has put together three stellar sessions of trading.

The stock is up 5.5% from its lows just a few days ago and is now breaking out over its 100-day and 200-day moving averages. It’s also pushing through downtrend resistance.

In reality, AMZN stock may run out of energy once we clear Black Friday and Cyber Monday. But even in the event of a pullback, Amazon looks healthy as long as its holds its 50-day moving average. Below that and range support down near $1,700 could be back in play.

But if AMZN can continue to rally, this one could put together a potent year-end run. Below $1,800 and caution is warranted, while a move below the 50-day should be taken seriously. 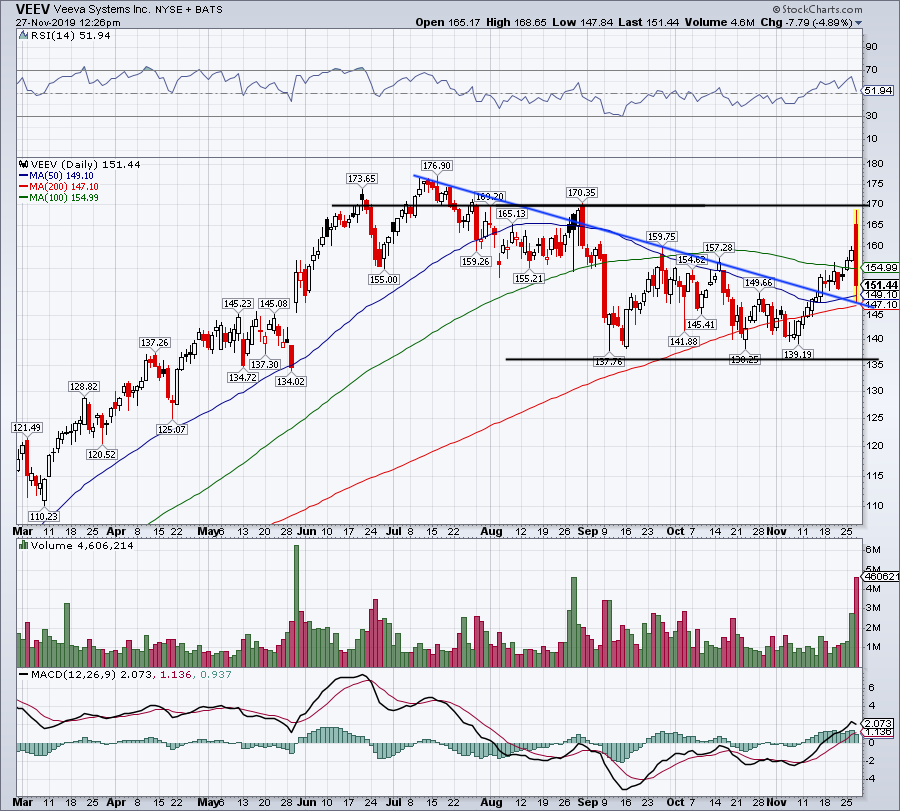 Veeva Systems (NYSE:VEEV) was moving higher after reporting earnings, but has since given up those gains. It’s now resting on a very critical juncture.

VEEV stock bounced from those levels on Wednesday and if it can stay above them, it looks okay on the long side — albeit, with some caution. If it can reclaim the 100-day moving average, a rally back to $160-plus is possible.