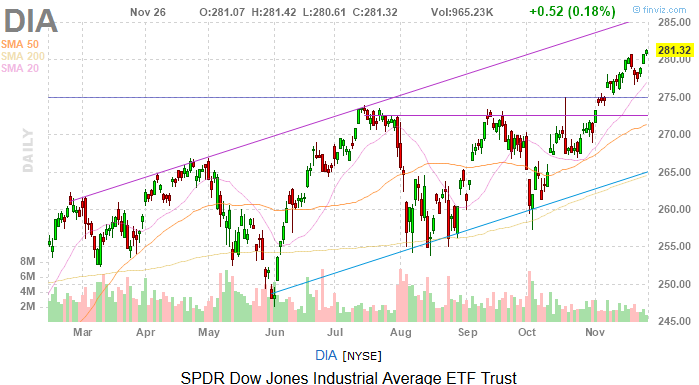 Traders appear to be giving thanks already despite the shortened trading week as domestic equities notched more new highs Tuesday, albeit in modest fashion.

Broadly speaking, Tuesday’s action was fair considering that the Conference Board’s October consumer sentiment survey showed another monthly decline. For those keeping score at home, that’s four straight monthly declines and that certainly isn’t the type of data point retailers want to be digesting at this time of year.

With stocks gaining in the face of some concerning consumer data, it’s safe to say today’s gains were largely attributable to trade news.

With gains as tepid as they were for the broader benchmarks, it wasn’t surprising to see that, in late trading, half of the Dow components were higher while half were in the red. Let’s get into some of the individual performances right now.

Disney seems to be making all the right moves lately and investors are being rewarded. On Monday, I noted the stock pushed higher thanks to a boffo weekend at the box office for Frozen 2.

Today, the catalyst for Disney’s ascent to yet another record is similarly easy to identify: a report in the New York Post suggesting the new Disney + streaming service is luring 1 million subscribers per day.

That pace isn’t tenable over time, but it does underscore the point that Disney + is off to a stellar start and positions Disney to be a streaming winner.

Shares of home improvement retailer Home Depot (NYSE:HD) have been under some pressure since the company’s recent and disappointing earnings report, but the stock got a lift today on the back of some incremental bullish analyst chatter. Long story short: there are some on Wall Street that don’t expect this year’s shorter holiday shopping season to be much of a drag on Home Depot stock.

UnitedHealth (NYSE:UNH) has been making some frequent appearances in this space as of late. Although the stock traded lower today, it still offers some value heading into year end and it appears Wall Street agrees with that assessment.

It has been a while since McDonald’s (NYSE:MCD) made an appearance here and the last time it was discussed, it was in the wake of CEO departure controversy that predictably weighed on the stock. There’s better news to offer up today.

Shares of McDonald’s gained almost 1% after one investor speculated the stock has the potential to gain 25% or more over the next 12 to 24 months. McDonald’s is down about 11% this quarter, a selloff that at this point looks very overdone.

For the all talk about trade, and there has been plenty, it’s important to remember that a new year is fast-approaching and that it’s a presidential election year. That probably means President Trump will be tweeting and commenting about the Federal Reserve. However, some market observers believe the Fed has helped out Trump this year and investors are winning as a result.

“The three Fed rate cuts, the commitment to purchase Treasury bills and the promise to conduct repurchase agreement operations have pushed short-term interest rates lower,” said State Street in a recent note. “At the same time, long-term rates have modestly increased as fears of recession have receded and optimism regarding a potential phase one US-China trade deal has grown. As a result, the yield curve has steepened over the past several weeks. The Fed has successfully and purposefully un-inverted the yield curve through their powerful policy responses. This has further flattered stock prices to new all-time highs, particularly for portions of the market that were previously out of favor, such as cyclicals, value stocks and financials.”