Despite having $128 billion to burn, Warren Buffett just backed out of a bidding war after a slightly higher offer topped Berkshire Hathaway’s.

If the Oracle of Omaha is that shy to just spend a tad more of his giant cash pile, could that be saying something about the stock market’s overall valuation?

Last week, the Berkshire Chairman and CEO bid $140 a share, or just over $5 billion, for Tech Data, a hot technology distributor, according to an exclusive report Friday from CNBC’s Becky Quick.  Then private-equity giant Apollo Global Management then sweetened its initial bid to $145 a share, or $5.14 billion.

Buffett then bowed out.

Little is cheap in the market right now as stocks’ record run this year has driven multiples higher across the board and lifted most stocks.

“Prices are sky-high for businesses possessing decent long-term prospects,” Buffett said in the most recent annual letter. He has repeatedly said the premium for buying companies outright has gotten too rich for his liking partly due to competition from private-equity companies.

The S&P 500 is up 25% this year, on pace for its best annual performance since 2013. An impressive rally this quarter has pushed stocks to all-time highs amid optimism on a U.S.-China trade deal and receding recession fears.

The forward price-to-earnings ratio for the S&P 500, the most common indicator for market valuation that measures current share price relative to per-share earnings estimates for the next 12 months, has climbed to levels last seen around last December’s monster sell-off. 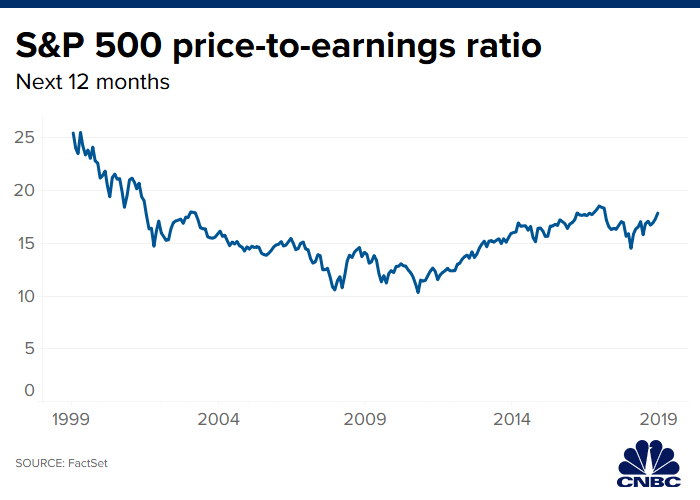 “U.S. equities remain highly overvalued relative to non-U.S. equities,” Lori Calvasina, head of U.S. equity strategy at RBC, said in a note on Wednesday. “We aren’t looking for much multiple expansion in 2020.”

The S&P 500 is also trading at about 2.14 times sales estimates for the next 12 months. The only times the market reached such multiple was September 2018 when the sell-off began and in the first quarter of 2000 just before the burst of the tech bubble. 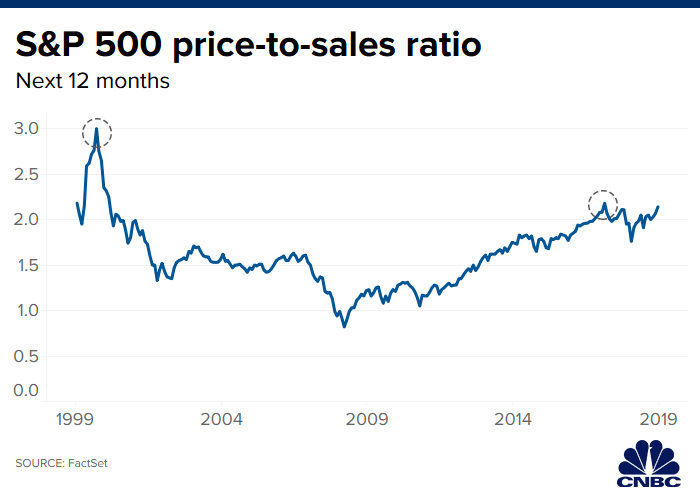 It is “not unprecedented but almost unprecedented,” Patrick Armstrong, chief investment officer at Plurimi Investments, said on CNBC’s Worldwide Exchange on Friday. “A multiple doesn’t cause a sell-off, but the more expanded a multiple gets the bigger drawdown happens with the sell-off.”

The elevated valuation is especially prevalent in tech as the P/E ratio for the sector has rebounded to the highest levels of the past ten years, according to Bespoke Investment Group.

It begs the question, if Buffett isn’t willing to pay a premium, should you?