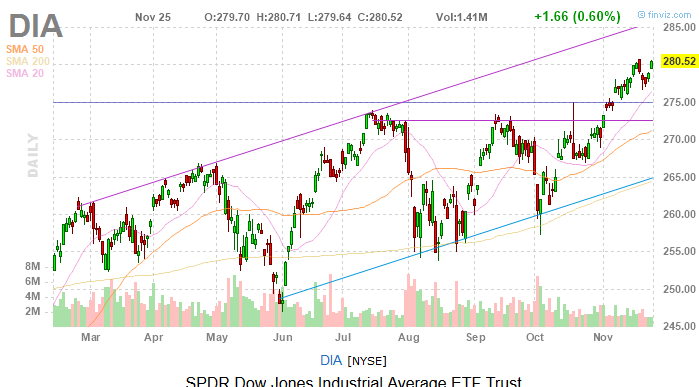 Optimism on the trade front and the renewal of the “Merger Monday” theme sent stocks rallying to record highs on Monday. But no members of the Dow Jones Industrial Average were involved in the leap today.

On the mergers and acquisitions front, as has been widely speculated, Charles Schwab (NYSE:SCHW) announced a $26 billion offer for rival TDAmeritrade (NASDAQ:AMTD). In another widely forecast deal, French luxury goods maker LVMH is buying Tiffany (NYSE:TIF) for more than $16 billion. Of course, the Tiffany name and prestigious blue boxes will be retained.

In a sign that trade negotiations may have some credible momentum, China is promising to implement harsher penalties on violators of intellectual property rights, long a sticking point for the Trump Administration.

While some data points suggest Beijing hasn’t yet upped purchases of American farm goods as promised (soybean exports to China declined last month), markets are more concerned with the intellectual property issue because that has been a drag on a slew of big-name U.S. tech companies over the course of the trade war.

On another trade-related note, CNBC star Jim Cramer said today that the mainstream media’s treatment of Chinese President Xi Jinping and President Trump, making the former out to be the good guy and the latter a “mad man,” has been unfair.

Opinions aside, it appears that Phase I of a trade deal is close to happening, but investors shouldn’t bank on Phase II being realized anytime soon.

UnitedHealth Stock Is on Fire

As noted last week, some momentum has been percolating in Dow Jones healthcare names, including managed care provider UnitedHealth.

“The UnitedHealthcare Medicare services centers will begin to open in January 2020 at Walgreens stores in the Las Vegas, Phoenix, Cleveland, Denver and Memphis markets,” according to the companies.

The more plausible explanation for UNH’s Monday rally is probably recent data indicating hedge funds were eager buyers of the stock when it was slumping earlier this year.

Although it was in modest fashion today, Disney (NYSE:DIS) just keeps on delivering for investors and no, I’m not talking about streaming today. Streaming is a nice a compliment to Disney’s core businesses, which include making movies.

Frozen 2 got off to a solid start over the weekend, hauling in $127 million in box office receipts.

“The film’s box office sales fell in line with analysts’ expectations of $100 million to $140 million, and it’s estimated sales will remain strong throughout the Thanksgiving weekend,” according to Schaeffer’s Investment Research.

On a day when positive trade news took center stage, it wasn’t surprising to see all of the Dow’s technology constituents finish in the green. Semiconductor giant Intel (NASDAQ:INTC) was the leader of that pack, gaining 2%. Chip stocks, including Intel, have long been sensitive to the trade intellectual property issue with China so progress on that front is a boon for Intel shareholders.

However, some chip industry observers believe growth in share prices is being supported by buybacks, not robust demand.

“Keep in mind that most of the double-digit sales growth expected next year will be regaining lost ground to get back to 2017 levels — before the U.S. trade conflict with China,” reports MarketWatch. “Meanwhile, because of flat earnings, the stocks are much more expensive than they were in December.”

Assuming the aforementioned trade chatter is legitimate and Phase I is signed before the end of the year, that would remove a significant volatility overhang investors have had to contend with this year. Then again, if you’re investing for the long-term, it’s best not to get caught up in daily market gyrations.

Don’t just take my word for it.

“Taking all of this into account, I would argue that short-term volatility is unsettling but is not the biggest risk to long-term investors,” said BlackRock in a recent note. “Fleeting price changes should be of little concern to someone investing for a retirement that is five, 10, 15 or more years away. They may even represent opportunity, as company fundamentals are the predominant driver of long-term investment returns.”