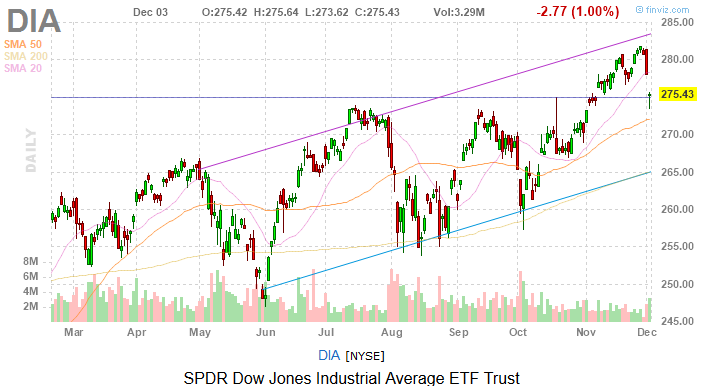 Although December is usually a good month for stocks, that historical precedent wasn’t followed yesterday. And defiance of that trend got much, much worse today as all three major equity benchmarks were slammed on the renewal of trade tensions between the U.S. and China.

Riskier assets were roiled today as President Trump dialed back expectations that Phase I of a trade deal with China will soon be signed, prompting speculation that tariffs scheduled to go into effect on Chinese imports on Dec. 15 will proceed.

“I like the idea of waiting until after the election for the China deal. But they want to make a deal now and we’ll see whether not the deal is going to be right,” said the president earlier today.

China wasn’t the only major economy drawing Trump’s ire today. The president is threatening $2.4 billion worth of trade levies on French imports, something the Eurozone’s second-largest economy is already promising retaliatory action on.

All that just a day after the White House pledged to implement tariffs on Argentine and Brazilian steel imports to protect domestic producers.

All that got the Dow Jones Industrial Average to a situation where in late trading today, Merck (NYSE: MRK) was the only member of the index in the green and only modestly so.

Predictably, oil equities were weak today on the back of the aforementioned trade jitters and Dow component Exxon Mobil (NYSE:XOM) was not immune from that scenario. However, on a day when good news was hard to come by, there was actually some of that for Exxon.

“BAML said the stock was its top U.S. oil major pick for 2020 and that counter cyclical investments and asset sales should vanquish market skepticism over whether it can outperform its peers,” reports Barron’s.

Underscoring the rough sledding for stocks today, shares of UnitedHealth (NYSE:UNH) lost more than 1%. As was the case with Exxon, there was some decent news flow out for UNH today even though the stock lost ground.

The company said it expects net earnings per share for 2019 to hover around $15. The managed care provider previously forecast earnings of $14.90 to $15 per share.

Adding to the theme of stocks slumping today even with some positive headlines, there’s Nike (NYSE:NKE), one of the Dow’s more trade-sensitive names. The athletic apparel giant was sporting a loss of more than 1% in late trading.

Morgan Stanley’s Kimberly Greenberger revealed a new price target of $118 on Nike today, implying upside of more than 25% from the stock’s Tuesday close.

“We continue to believe NKE is in the early innings of transition from a traditional wholesale business to a digitally-driven, direct-to-consumer brand,” said the analyst in a note to clients.

As noted earlier, chemicals maker Dow was one of the worst-performing names in the blue-chip index today due to its trade sensitivity. That’s bad news because the stock declined yesterday as well after Morgan Stanley downgraded it to “equal weight” from “outperform.” If Dow falls another 3%, it’ll violate its 50-day moving average, potentially accelerating declines from there.

Hindsight is 20/20, but a day like today was probably brewing for some time given the inability of the U.S. and China to come to trade terms. Sure, there are plenty of musings about Phase I of a trade deal, but the longer it took to put that plan into action, the greater the risk that President Trump would lose patience. That’s where we arrived at today.

Over the near-term, the White House can help stocks get back on track by delaying the tariffs set to go into effect on Dec. 15. However, there are no guarantees that will happen.