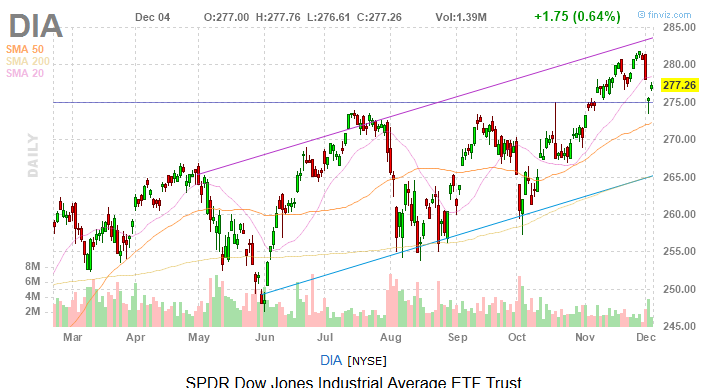 Investors that have been actively engaged with the U.S.-China trade spat for the past several months know there aren’t many certainties except that situations can turn on a dime. In other words, stocks can go from dismal days (yesterday) to excellent showings (today) rather rapidly.

On Tuesday, President Trump said a trade deal with China wasn’t necessary until after the 2020 presidential election, exuding confidence he’ll win a second term and that China needs a resolution much more than the U.S. That stoked speculation that both sides could proceed with punitive tariffs that would only serve to ratchet up hostilities. Wednesday brought a different, more sanguine story.

“Negotiators are getting near an agreement on the amount of tariff relief in a phase-one accord between the world’s two largest economies. President Donald Trump said discussions with China are going very well, just a day after downplaying the urgency of a deal,” reports Bloomberg.

No one, not even President Trump himself, knows what tomorrow will bring on the trade front, but today was the best day of December to this point as 25 of the 30 Dow members were higher in late trading.

Avid readers of this column know that Johnson & Johnson (NYSE:JNJ) has been in hot water for much of this year, disappointing investors along the way, due in large part to litigation risk, be it asbestos or opioid.

The stock rallied 1.62% today, putting it in the upper echelon of Dow performers after JNJ said the Food and Drug Administration (FDA) was wrong when it said it found traces of asbestos in its popular baby powder.

“Our talc is safe and asbestos free, and these 150-plus tests, and the tests we routinely do to ensure the quality and safety of our talc-based products, are consistent with the results from renowned independent research labs over the past 40 years,” said JNJ in a statement out Tuesday evening.

The company did say that the  previously announced recall of Lot #22318RB of Johnson’s Baby Powder remains in effect.

It was another solid day at the office for managed care provider UnitedHealth (NYSE:UNH) as the stock gained about 1%. An array of analysts were out today boosting price targets on UNH shares, including BMO Securities to $310, Credit Suisse to $320 and Piper Jaffray to $325. Even the average of those targets, which is just over $318, implies significant upside from the $280 area at which UNH currently resides.

There were a small amount of Dow Jones losers today, but Cisco Systems (NASDAQ:CSCO) was the worst offender in the group, shedding 0.88%.

This old guard tech name has been tumbling for several months and with an almost 6% drop over the past month, the stock is very much in danger of turning red on the year.

Tomorrow is a new day and with it comes the aforementioned potential for new headlines on the trade front, but some market observers believe President Trump’s trade musings are minor blips on the radar and won’t derail stocks this month.

“I do not believe that they will follow through with the December tariff,” said Peter Boockvar, Bleakley Advisory Group’s chief investment officer, said in an interview with CNBC. “If we do not have a [China trade] deal, I think they’ll couch it and we’re just postponing the tariffs … The administration knows how sensitive we are to the possibility of those extra tariffs particularly hitting the consumer.”