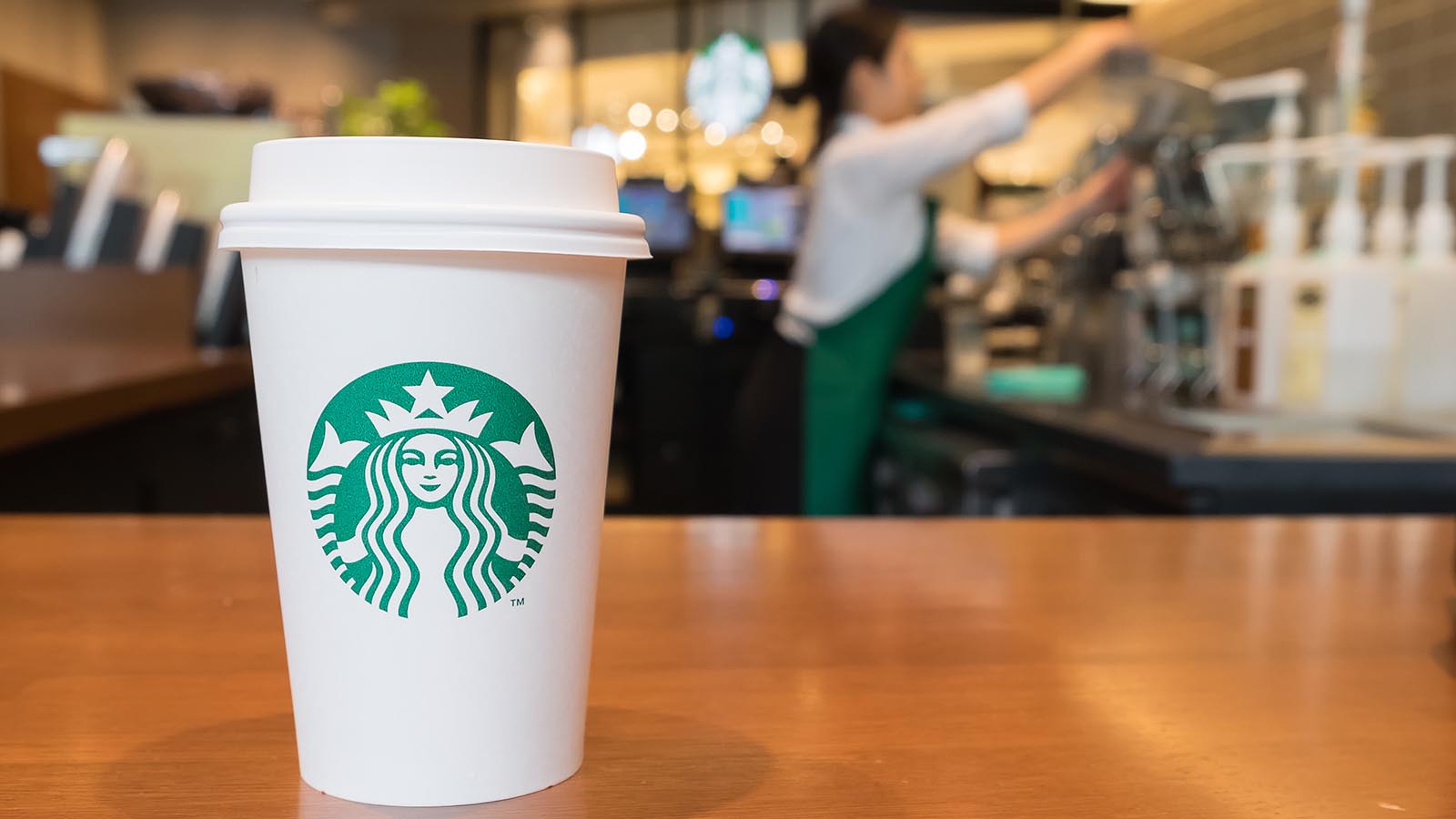 The time to buy a “dividend aristocrat” stock is when it’s out of fashion. Then ignore it. You should plan on holding such a stock for at least three years, but preferably a lifetime. That has been a good strategy with Starbucks (NASDAQ:SBUX), the Seattle-based coffee chain that is getting back to the basics for the holiday season.

Starbucks long ago supplanted Coca-Cola (NYSE:KO) as the most sugar-dependent company on the planet. A single, extra-large caramel hot cocoa, made with oat milk, clocks in this holiday at 758 calories. Creamy, sugary drinks at $5-$6 each replaced the simple espresso as the mainstay at the chain’s more than 31,000 outlets.

Over the last five years Starbucks shareholders have seen capital gains of 105%, plus a continuing stream of dividends rising from 16 cents per share to the current 41 cents. Even if the current yield is 1.9%, that’s a track record to go for.

After years spent trying a variety of diversification strategies, from bakeries to tea to wine and beer, Starbucks has gone back to the basics with its 1,000-square foot lounge stores, often at interstate junctions or outside shopping centers, and its big urban roasteries. The latest, in Chicago, replaces a Crate & Barrel.

The roasteries are like one of Disney’s (NYSE:DIS) theme parks for coffee lovers, with multiple floors, bars, local art and experimental brews. They’re estimated to consume 200,000 pounds of coffee per year. It’s the same kind of branding done by Nike (NYSE:NKE), a beacon to the larger region.

As unemployment remains low and competition for low-wage workers remains keen, Starbucks is loosening up on employees. Despite this, some workers are pressing hard, and the word “union” comes up.

These are good problems to have. They speak to a growing economy and a strong labor market that can afford both a morning muffin and an afternoon pick-me-up.

There are also more serious challenges. Starbucks is dependent on its stores. It sold its supermarket and food service business to Nestle (OTCMKTS:NSRGY) last year. Unlike McDonald’s (NYSE:MCD) and other fast food chains, which are franchising stores to get franchiser profits, Starbucks continues to own all its outlets.

Then there’s China, which was supposed to be making Starbucks a growth stock. Growth there is slowing as new outlets take business from older ones. Luckin Coffee (NASDAQ:LK), which focuses on take-out, delivery and undercutting Starbucks on price, is coming on strong in China.

The app-based automation that drew investors a few years ago is no longer cutting-edge. Starbucks is taking a page from the Luckin playbook in cities like New York, with stores doing pick-up and delivery only, through the app. It’s also reaching the limits of barista productivity. A balance must be struck between the time people enjoy watching someone make coffee for them and time wasted waiting for coffee to be made.

The Bottom Line on Starbucks Stock

Starbucks is the General Motors (NYSE:GM) of coffee, offering a wide selection of flavors, flavorings and formats for drinking it.

This naturally leads people to wonder if we’ve hit peak Starbucks. A rare miss on earnings in July was the excuse to take profits. The stock remains 15% below its all-time high achieved just before those earnings. Since a low was hit Nov. 4, SBUX stock has slowly been grinding upward.

That’s usually a good time to buy. The only caveat is just how hot the general market remains. But that’s the point. Starbucks has doubled the gains in this extraordinary Nasdaq Composite run over the last 10 years. It’s natural to believe it can keep doing that.

Dana Blankenhorn is a financial and technology journalist. He is the author of the environmental story Bridget O’Flynn and the Bear, at the Amazon Kindle store. Write him at danablankenhorn@gmail.com or follow him on Twitter at @danablankenhorn. As of this writing he owned no shares in companies mentioned in this story.