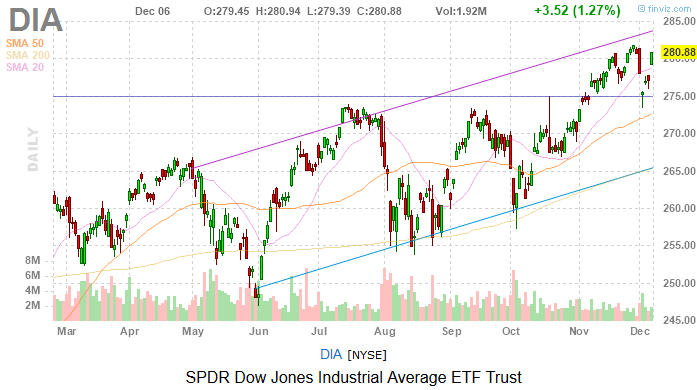 The November jobs report delivered today before the opening bell brought some holiday cheer and that was enough to send stocks soaring to close the week as the major equity benchmarks closed higher for a third consecutive day.

The Labor Department said the U.S. economy added 266,000 new jobs last month, while the October number was revised higher to 156,000. Economists were expecting the addition of 180,000 jobs in November.

Alright, so let’s assume there are naysayers out there and there probably are. They’ll say, and they’re not wrong, that November report was aided by 41,000 General Motors (NYSE:GM) employees heading back to work, seasonal hiring for the holiday shopping season and census hiring. All true, but even combined, those factors likely didn’t account for 266,000 jobs in a single month.

Moreover, the unemployment rate dipped to a 50-year low of 3.9% while wages rose 3.1%. Some investors may be apt to look for the political implications of these numbers and there are undoubtedly some, but these numbers also reveal that near-term downside for stocks may be limited and that’s obviously good news.

In late trading, 27 of the Dow’s 30 components were in the green and of the three losers, downside was limited. UnitedHealth (NYSE:UNH) was the Dow’s worst performer today, but its Friday loss was modest and that stock has been on a tear of late.

Industrial conglomerate 3M is one of the Dow’s worst-performing names this year and it will take a miracle, Christmas or otherwise, for the shares to finish the year flat. A 13.70% year-to-date loss is difficult to overcome with not many trading days left in the year.

However, 3M did give investors reasons to cheer today as it paced the Dow on rumors that the company is mulling a sale of its drug delivery systems unit, which could command $1 billion. That’s not jaw-dropping news for a $95 billion company, so the stock’s move today was likely more attributable to the jobs report and news that China is planning to waive some tariffs on U.S. commodities imports.

That’s relevant to 3M because the stock is trade sensitive and with China showing a gesture of good faith, President Trump may decide to back off of tariffs slated to go into effect on Dec. 15.

The aforementioned jobs report wasn’t the only cheery piece of economic data out today. The University of Michigan’s preliminary sentiment index for December jumped to 99.2 from from 96.8 last month. An interesting element of that report is that respondents were divided along partisan lines with Republicans feeling good while sentiment among Democrats declined.

Politics aside, the Dow’s three consumer discretionary names — Home Depot (NYSE:HD), McDonald’s (NYSE:MCD) and Nike (NYSE:NKE) — all closed higher. Underscoring the strength in that trio, McDonald’s was the worst performer today, adding about half a percent.

“This has been a monumental year for The Walt Disney Company, marked by the launch of our new streaming service Disney+ and the completion of our acquisition of 21st Century Fox,” said Disney CEO Bob Iger in a statement. “We are pleased to deliver another substantial dividend to shareholders as we continue to invest in the company’s future.”

For those addicted to Federal Reserve rate cuts, today’s data points weren’t good news, but that’s good news for the rest of the market. Sure, November’s pace of job creation will be difficult to maintain, but even it remains simply “strong,” the Fed won’t be compelled to trim rates again anytime soon.

“We see the current stance of monetary policy as likely to remain appropriate as long as incoming information about the economy remains broadly consistent with our outlook of moderate economic growth, a strong labor market and stable inflation,” said Fed Chairman Jerome Powell in Congressional testimony last month. “There is nothing in the November jobs report would seem to undermine that view.”