It certainly doesn’t pay to be an old-fashioned stock picker anymore. 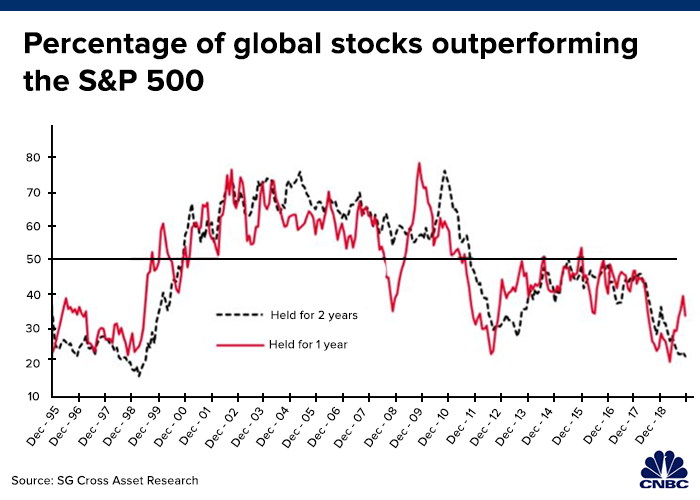 While savvy stock picking used to make money managers billions of dollars, the likelihood of beating passive investors these days is slimming. Investors have a 22% chance of picking a stock that will perform better than the S&P 500, according to Societe Generale.

In a universe of 16,000 global and emerging market stocks, 78% have underperformed the S&P 500 in the past two years. Further, only 34% have performed better than the S&P 500 in the last year, said Societe Generale in a note titled “the most depressing chart ever!”

“The strong performance of the S&P 500 leaves everything in its wake,” Andrew Lapthorne, Global Head of Quantitative Research at the firm said in a note to clients. “This is lauded as a success and an abject failure of active fund management.”

With data like this, it’s no surprise that assets in passive investing topped those of active investing for the first time ever in August. U.S. index funds and ETFs assets reached $4.271 trillion, compared with $4.246 trillion run by stock-pickers, according to Morningstar. This shift has been coming for decades as passive investing consistently outperforms active over long time periods despite active management charging higher fees.

In the last five years, 82% of active funds in the United States underperformed the S&P 500, according to S&P Dow Jones Indices’ most recent global SPIVA report. And with over 12,400 stocks failing to beat the S&P 500 in the past two years its no wonder why stock-picking shops are closing their doors.

“If the measurement of company success is outperforming the 500 largest-cap US businesses supported by the US Federal Reserve, debt-funded share buybacks, and increasingly sophisticated financial products, then you can understand why less business are going public and private equity is booming,” said Lapthorne.

— with reporting from CNBC’s Michael Bloom.