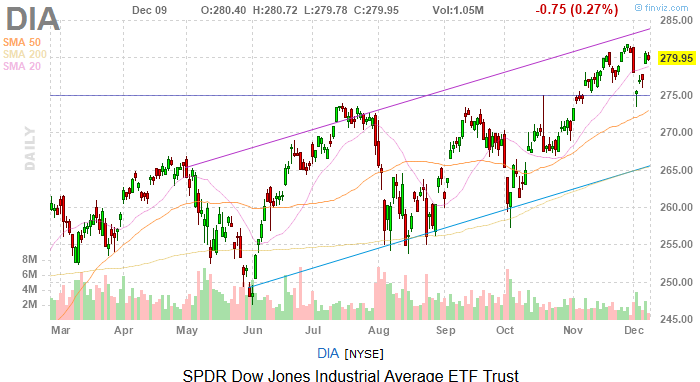 Following a banner day for stocks on the back of strong consumer and employment data last Friday, stocks edged lower Monday as traders renewed their focus on U.S.-China trade negotiations.

Trade talks between the U.S. and China are on the clock, and that clock is loudly ticking away. New tariffs on Chinese imports are set to go into effect on Dec. 15. There’s impetus for both sides to get a deal done, but data suggest China could use a more sanguine relationship with the U.S. sooner than later.

“Data showed China’s exports fell 1.1% in November, with those to the U.S. tumbling 23%, underscoring why the Asian nation may want to resolve the dispute,” reports Bloomberg.

Now that the market has digested marquee data points in the form of the November jobs report and the early reading on December consumer sentiment, coupled with the fact that there are no earnings reports of consequence to consider, trade is going to dominate near-term headlines.

So until credible reports emerge that a deal is going to be signed by the U.S. and China, or at the very least, the Dec. 15 tariffs will be pushed, investors could be treated to more days like today when just 12 of the Dow’s 30 components were higher in late trading.

With trade in focus today, it probably wasn’t surprising that Apple (NASDAQ:AAPL), one of the Dow’s most trade-sensitive names, was the worst-performing member of the blue-chip index, shedding 1.4%. To be fair to Apple, plenty of U.S. technology companies are levered to the trade talks and could be pinched by the tariffs that could go into effect on Dec. 15.

It’s clear why Apple would like the White House to avert the December tariffs: the company’s iPhones, iMacs, iPads and AirPods in China. Those are already pricey products and the company would have to pass higher costs onto shoppers in the event of new tariffs.

Wedbush analyst Daniel Ives “estimates that a 15% tariff would trim fiscal 2020 profits by about 4%, or around 50 cents a share, if it proceeds as scheduled,” reports Barron’s.

Hope isn’t lost for Apple investors. CEO Tim Cook has one of the best, if not the best relationship with President Trump among major technology executives.

As noted earlier, home improvement giant Home Depot was the leader of the Dow pack today as some analysts were waxing bullish on the name ahead of the company’s Wednesday analyst day.

“As sentiment sours, we’re buyers into analyst day,” said Wells Fargo in a note to clients today. “We believe the Analyst Day overhang is peaking, and see opportunities for post-event relief should [fiscal year 2020] commentary prove better than feared.”

It’s also fair to surmise that Home Depot’s Monday move higher represents some follow through on last Friday’s consumer sentiment and employment reports, which appeared to be good news for consumer cyclical stocks of which Home Depot is one.

Shares of Goldman Sachs (NYSE:GS) lost 1.2%, but there was some news out indicating that the bank could join the expanding ranks of financial services firms that are branching out into the robo advisor business.

The new service, assuming it’s launched, could focus on clients with just $5,000 in assets and represents Goldman’s ongoing effort, one that includes expanding its exchange-traded funds roster, to attract clients beyond the ultra wealthy.

“Analysts have been quick to comment, with Cantor Fitzgerald calling it smart and strategic and SVB Leerink analyst Jonathan Chang claiming it will be ‘unlocking value for investors,’” according to Schaeffer’s Investment Research.

There are a couple of central bank meetings that could provide some respite from the trade drama, including the Federal Reserve on Wednesday. However, a rate cut is not likely to emerge from this meeting and last Friday’s data confirm as much,

The European Central Bank (ECB) meets Thursday and for investors engaged with Eurozone equities or ETFs, that meeting could deliver some positive news on the easy money front.

Beyond those meetings and barring surprises, market participants will likely be hanging on trade words this week and hopefully that doesn’t mean bellicose rhetoric from President Trump on Twitter.