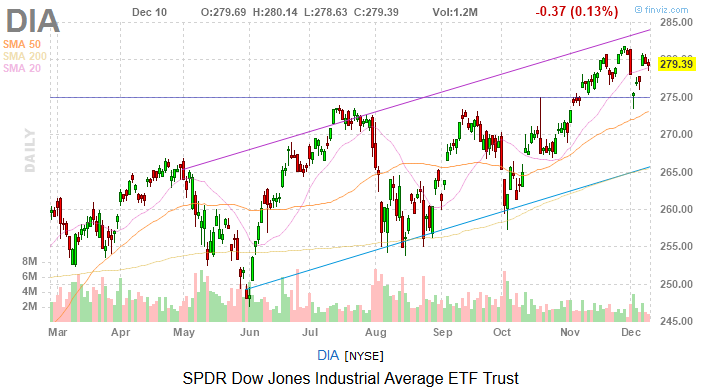 Stocks and other riskier assets found themselves in holding patterns on Tuesday as the U.S. and China reportedly continued hammering details on the initial phase of a trade agreement. After faltering on Monday, the major domestic equity indexes nudged lower again today.

In some positive trade news (there wasn’t much negative today), it appears that China is betting that President Trump will back away from the tariffs on Chinese imports that are set to go into effect on Dec. 15. Reportedly, there has been ample talk between the two sides about scaling back levies that are already being used by both countries.

“The U.S. has added a 25% duty on about $250 billion of Chinese products and a 15% levy on another $110 billion of its imports over the course of a 20-month trade war,” reports Bloomberg. “Discussions now are focused on reducing those rates by as much as half. New tariffs are due to take effect on Dec. 15 on a list comprising some $160 billion in imports from China including consumer items like smartphones and toys.”

In other trade news, the U.S.-Mexico-Canada Agreement, known as the USMCA, was signed today. But only 19 Dow components were higher in late trading, proving that markets care more about a deal with China than anything else right now.

Apple is one of the more trade-sensitive names in the Dow Jones, which explains some of the stock’s upside today.

A more credible explanation is a report from Nomura Instinet analyst Jeff Kvaal saying that Apple is likely to roll out several 5G iPhones next year, as expected, and it’s looking like those phones will be pricey.

“The Nomura analyst says 5G radio requirements will boost the bill of material costs for the new phones,” reports Barron’s. “Using the 5G technology known as ‘sub 6 GHz,’ or mid-band frequencies, will add $40 to $45 to the cost of the phone, he says, while mmW capability could add another $30 to $35 in cost.”

Speaking of high-priced Apple products, one desiring a fully loaded version of the new Mac Pro desktop computer could shell out as much as $52,000 for all the bells and whistles, except for the $400 set of wheels that allows the computer to be mobile.

Although Apple wasn’t nice enough to throw in the wheels for free, Apple Card holders can earn 6% back on the purchase.

A Feel For Pfizer

On a day when many of the Dow’s more defensive offerings were sturdy, pharmaceuticals giant Pfizer (NYSE:PFE) nudged higher. Some analysts see significant upside ahead for the blue-chip pharma name.

“We are maintaining our fair value estimate of $46 per share. In looking at the core business of Pfizer, we expect 3% annual sales growth over the next three years (including acquisitions) as new drugs offset generic competition,” said Morningstar in a recent note. “However, on the bottom line we project a slightly healthier annual growth rate of 8% during the next three years as cost-cutting plans and share buybacks take shape.”

Shares of Pfizer were trading around $38.50 at this writing.

Disney At It Again

While Disney (NYSE:DIS) managed to make slight gains throughout the day, it ultimately made a small 0.40% dip to close the day. But there’s plenty of good news for the shares, which has been a regular theme this year. Frozen II is printing cash at the box office and Baby Yoda is doing the same in advance of Star Wars: The Rise of Skywalker coming out next week.

Movies, merchandise and streaming are integral to the Disney stock thesis, but investors shouldn’t forget about the company’s theme parks.

It has been over a week since Boeing (NYSE:BA) was last mentioned in this daily feature, but the Dow’s largest component was in the news again today. The shares were lower on, you guessed it, more 737 MAX news.

Boeing had previously hoped to get that passenger jet airborne again by the end of the year, a time frame that has been repeatedly pushed back. Remember, the decision isn’t Boeing’s to make. That lies with the Federal Aviation Administration (FAA).

And even after the FAA signs off on that, there will be months of training for pilots. In other words, it could be several more months before Boeing can make the 737 MAX serviceable for passenger travel.

Barring an epic, unforeseen disaster later this month, 2019 will wind up being a very good year for stocks. Some analysts are forecasting more of the same for 2020, assuming the right factors fall into place.

“The business cycle should begin to gain stronger traction… providing further room for market upside,” said J.P. Morgan in a research out yesterday.

The bank expects the S&P 500 to gain 8% next year with all of that upside being accrued prior to the November presidential election.