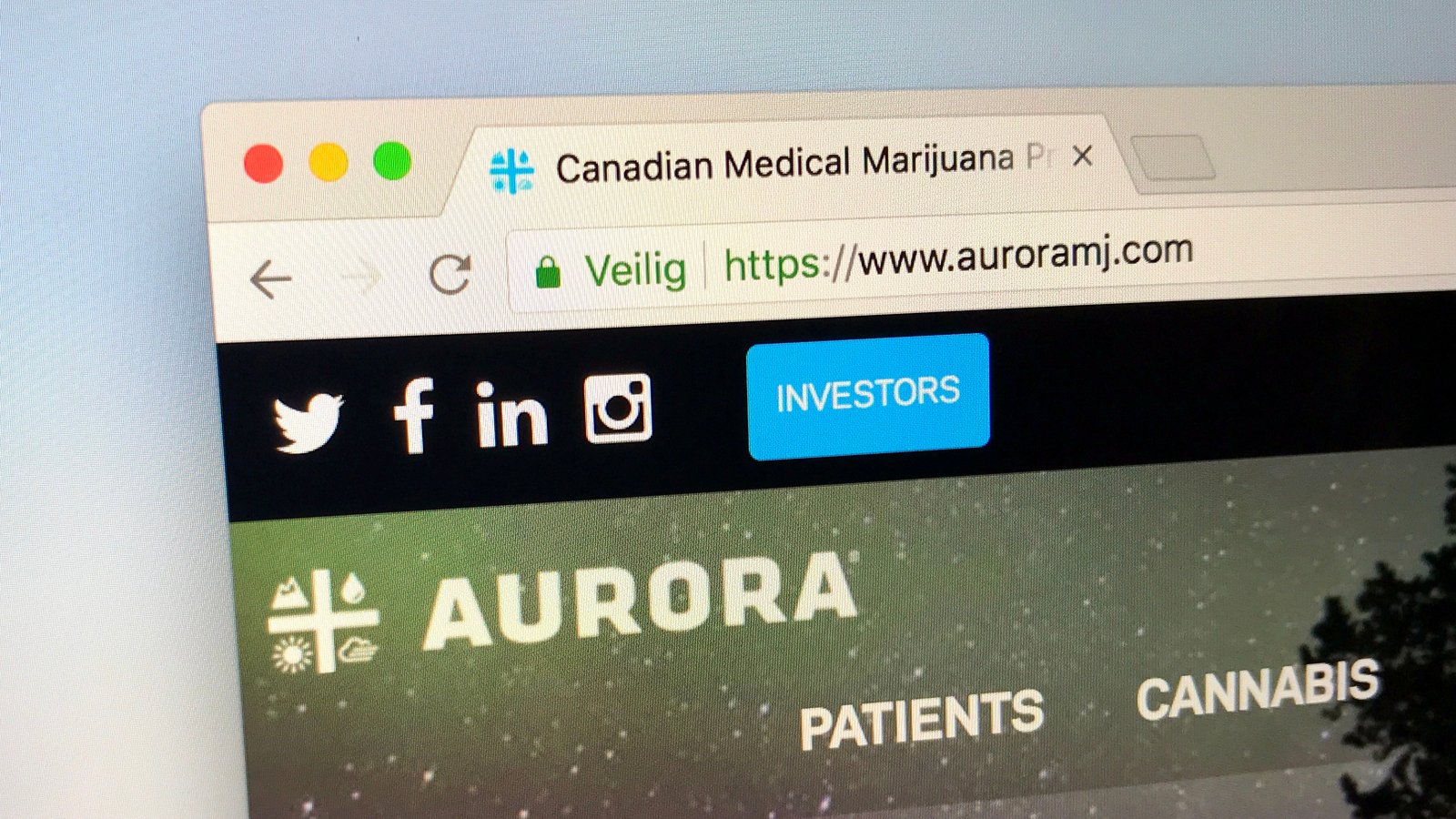 It’s easy to get the sense that Aurora Cannabis (NYSE:ACB) is at real risk of bankruptcy, which would send Aurora stock to zero. The steady decline of ACB stock over the past nine months suggests that at least some investors have that fear.

After all, Aurora Cannabis probably has been the most aggressive company in the cannabis space. Aurora has spent huge sums on cultivation facilities. It’s bought and built assets around the world. It’s selling cannabis to both the wholesale and retail markets.

And unlike Canopy Growth (NYSE:CGC), Aurora has done all that without a multi-billion dollar cash infusion. Instead, as skeptics have noted, Aurora has funded its efforts in large part through significant dilution of the existing owners of Aurora stock . There are now roughly 1.2 billion shares of ACB stock outstanding.

But Aurora Cannabis also has a significant amount of debt. With ACB’s free cash flow still sharply negative and Aurora stock down 75% from its highs, the risk facing ACB stock seems obvious. Aurora Cannabis is running out of options to raise cash to repay its lenders.

That risk can’t be ignored. And the risk is likely higher after the company’s disappointing fiscal first quarter report last month, after which Aurora certainly acted like a company with balance sheet concerns.

That said, there is some good news: Aurora’s balance sheet situation isn’t as dire as it looks at first glance, and Aurora has time to turn itself around. The bad news is that Aurora Cannabis still has an awful lot of work left to do.

And that capex includes the benefit of Aurora pulling back on some projects. Per its Q1 earnings release, it’s “immediately” ceasing construction at a facility in Denmark. And it’s deferring work on its Aurora Sun growhouse in Alberta.

In other words, Aurora Cannabis right now barely has enough cash to fund its capital projects for just the next three quarters. The moves in Denmark and Alberta suggest other cuts can’t be made without significantly impacting its near-term operations. And Aurora Cannabis posted an adjusted EBITDA (earnings before interest, taxes, depreciation, and amortization) loss of nearly 40 million CAD in Q1.

Those operating losses have to be funded. So does the company’s interest payments. Yet after its capital commitments for the next three quarters, Aurora would have only roughly 12 million CAD left from its existing reserves.

Simple math makes one thing clear: Aurora Cannabis needs more cash, and it may need a lot of cash. Even if its losses narrow in coming quarters, Aurora’s operations could burn another 100 million CAD or more over the rest of this fiscal year.

The company is not likely to generate positive cash flow in fiscal 2021, either. Aurora needs to raise at least 100 million CAD and likely closer to 200 million CAD just to survive the next seven quarters. Where can it find that money?

It may have difficulty raising that capital Aurora has issued convertible bonds in the past, but those bonds were boosted by the fact that Aurora stock kept rising. After the months-long decline of ACB stock, that’s no longer the case.

Last month, Aurora offered its convertible bondholders payment in Aurora stock at a 6% discount to the market price. The move itself highlights how difficult it was for the company to refinance that debt, which came due in March. It also added to the steady dilution of the existing owners of Aurora Cannabis stock: another 69.1 million shares of ACB stock  were issued.

In that context, it seems highly unlikely that Aurora will be able to raise debt again at reasonable terms anytime soon. An existing credit facility has first claim on the company’s assets. A convertible bond issue would require both a high cash interest rate and a low conversion price. Issuing more Aurora stock in a block offering would require another discount that would send the share price falling further.

But the good news is that Aurora still has two existing sources of cash. It can borrow more under a 360 million CAD facility with Bank of Montreal (NYSE:BMO). That facility still has roughly 160 million CAD (about U.S. $120 million) remaining, according to the company’s Q1 financial statements.

The company also can issue more Aurora stock. It has a so-called “at-the-market” program in which it sells ACB stock directly to the market at the prevailing market price. At the end of Q3, the company still had the right to issue U.S. $357 million in shares. After the end of the quarter,  it did sell another U.S. $81.2 million of ACB stock.

That recent issuance alone is enough to ease near-term cash concerns. And with U.S. $275 million left, Aurora seems to have plenty of cash to get itself through at least the end of fiscal 2021. Assuming its cash burn moderates going forward, Aurora probably can survive through FY22.

ACB anticipates that its capital expenditures will be roughly 50 million CAD in Q4. If its EBITDA losses moderate and that expenditure rate holds in FY21 and FY22, Aurora would probably burn something like 250 million CAD each year. The company could raise a roughly equivalent amount of money. It no doubt could cut its operating or capital costs further if necessary.

So bankruptcy doesn’t seem to be a huge near-term risk. But that alone doesn’t mean a bottom is in for Aurora stock. Even after the recent dilution, ACB still has a market capitalization of over U.S. $3 billion. Aurora Cannabis doesn’t have to go bankrupt for Aurora Cannabis stock to keep declining.

Meanwhile, both of its main funding sources have their own risks. More direct  issues of Aurora stock will create more selling pressure on ACB stock. And the Bank of Montreal facility has covenants that kick in on Sept. 30, 2020 that appear to require the company to have positive adjusted EBITDA. Aurora can and likely will renegotiate those covenants, but from that point on it will be at the mercy of its primary lender.

The resolution of the near-term convertible debt will help, but it still has roughly roughly 300 million CAD of longer-term convertible debt outstanding. This situation still can end badly for Aurora Cannabis, either through further selling of ACB stock or a bankruptcy that arrives in several years if ACB doesn’t generate positive free cash flow.

And to be honest, I don’t see Aurora stock as a buy right now. I’ve been bearish on ACB stock for most of this year, and I haven’t seen enough to change my mind.

But I could be wrong. There was some good news in the Q3 report, as selling prices increased quarter-over-quarter and its EBITDA loss narrowed. With Hexo (NYSE:HEXO) and CannTrust (NYSE:CTST) facing more significant cash crunches, Aurora Cannabis doesn’t look quite as risky as other struggling marijuana stocks.

Cannabis 2.0, the legalization of marijuana drinks and food, should help  multiple marijuana stocks, including Aurora stock  and any normalization of the Canadian recreational market could lift the entire sector. ACB long has been the highest-risk, highest-reward play in cannabis, and I believe that’s still the case.

That said, risks still loom. Dilution will be a continuing problem. Aurora needs external help from regulators in Canada and in its many overseas markets. And the U.S. $3 billion market cap of Aurora stock still prices in real success,  not just the avoidance of catastrophe.

ACB stock still looks like a falling knife. And I’m not close to ready to declare that knife worth catching just because the floor, at least for now, might be higher than $0.