U.S. stock futures are extending yesterday’s trade deal-inspired rally. President Donald Trump took to Twitter (NYSE:TWTR) Thursday morning to announce that the U.S. and China were closing in on a “big deal.” Later in the day, news outlets reported that both countries had reached a phase-one trade deal in principle.

Against this backdrop, futures on the Dow Jones Industrial Average are up 0.33% and S&P 500 futures are higher by 0.26%. Nasdaq Composite futures have added 0.35%.

Investors’ euphoria was on full display in the options pits, with call volume rocketing to the moon. Approximately 31 million calls and 20 million puts changed hands on the session.

The groundswell in call demand made massive waves at the CBOE Volatility Index (VIX), where the single-session equity put/call volume ratio slammed to 0.45 — a one-year low. At the same time, the 10-day moving average was pulled down to 0.60.

Options activity surged in sectors across the board, but the action in banks and semiconductors was particularly impressive. JPMorgan Chase (NYSE:JPM), Bank of America (NYSE:BAC) and Advanced Micro Devices (NASDAQ:AMD) all saw outsized rallies and heavy call volumes. 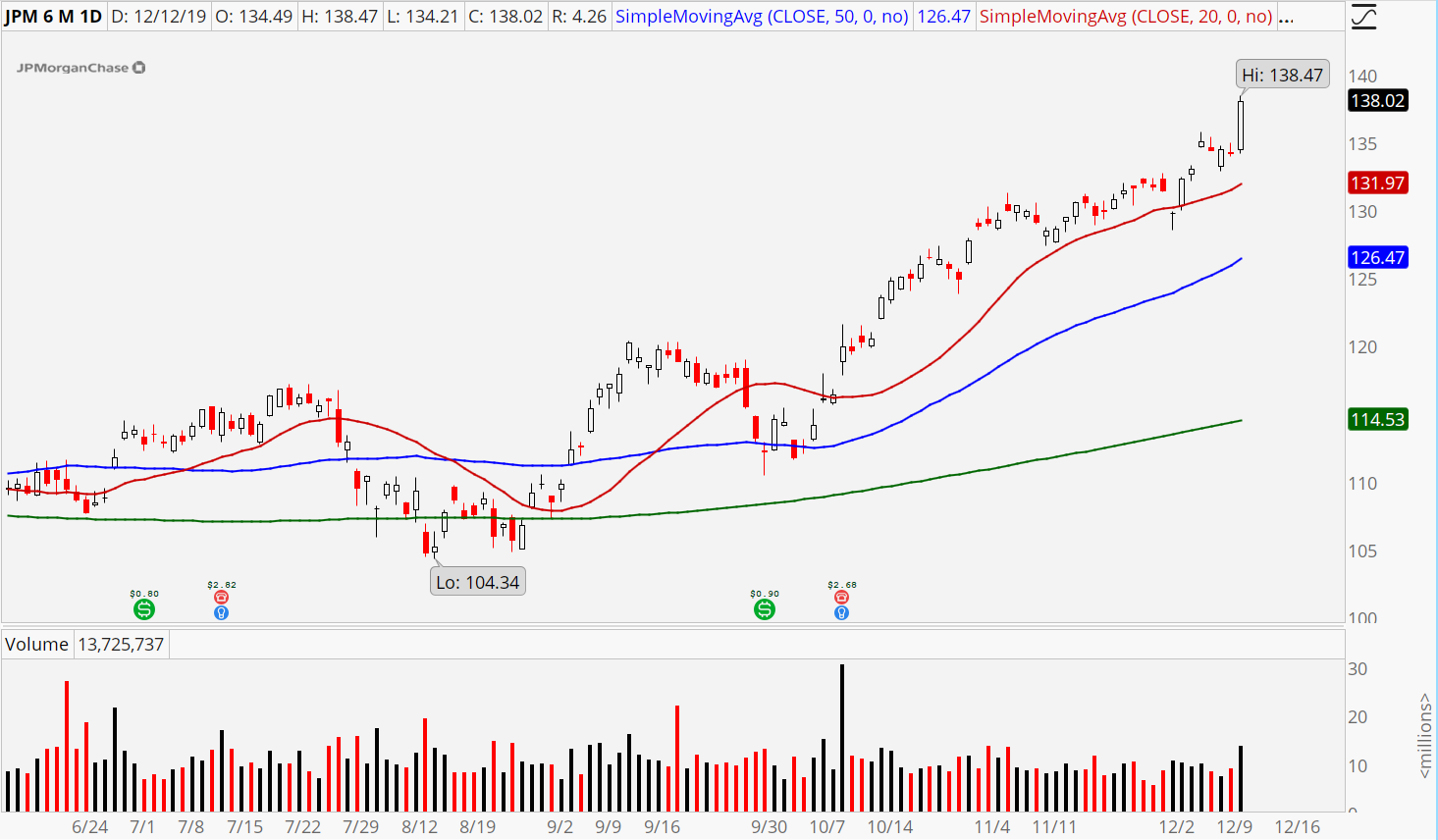 JPMorgan Chase shares scored one of their largest single-session gains of the year by rising 2.9% to a new record high. The strength continued overnight and has the stock up another 0.2% in pre-market trading. Every single data point I can analyze on its chart is bullish.

The price trend is rising above all major moving averages. We haven’t seen a whiff of distribution since September. Momentum is increasing and its year-to-date gains (41%) are incredible. And, on a relative basis, it’s the best looking trend of the banking sector.

On the options trading front, traders favored calls throughout the session. Total activity grew to 252% of the average daily volume, with 122,295 contracts traded. Calls generated 61% of the tally.

Implied volatility dipped to 22% or the 20th percentile of its one-year range. Premiums are baking in daily moves of $1.92 or 1.4%. With the stock set to gap up this morning, I prefer waiting for a pullback or pause over chasing new longs here. 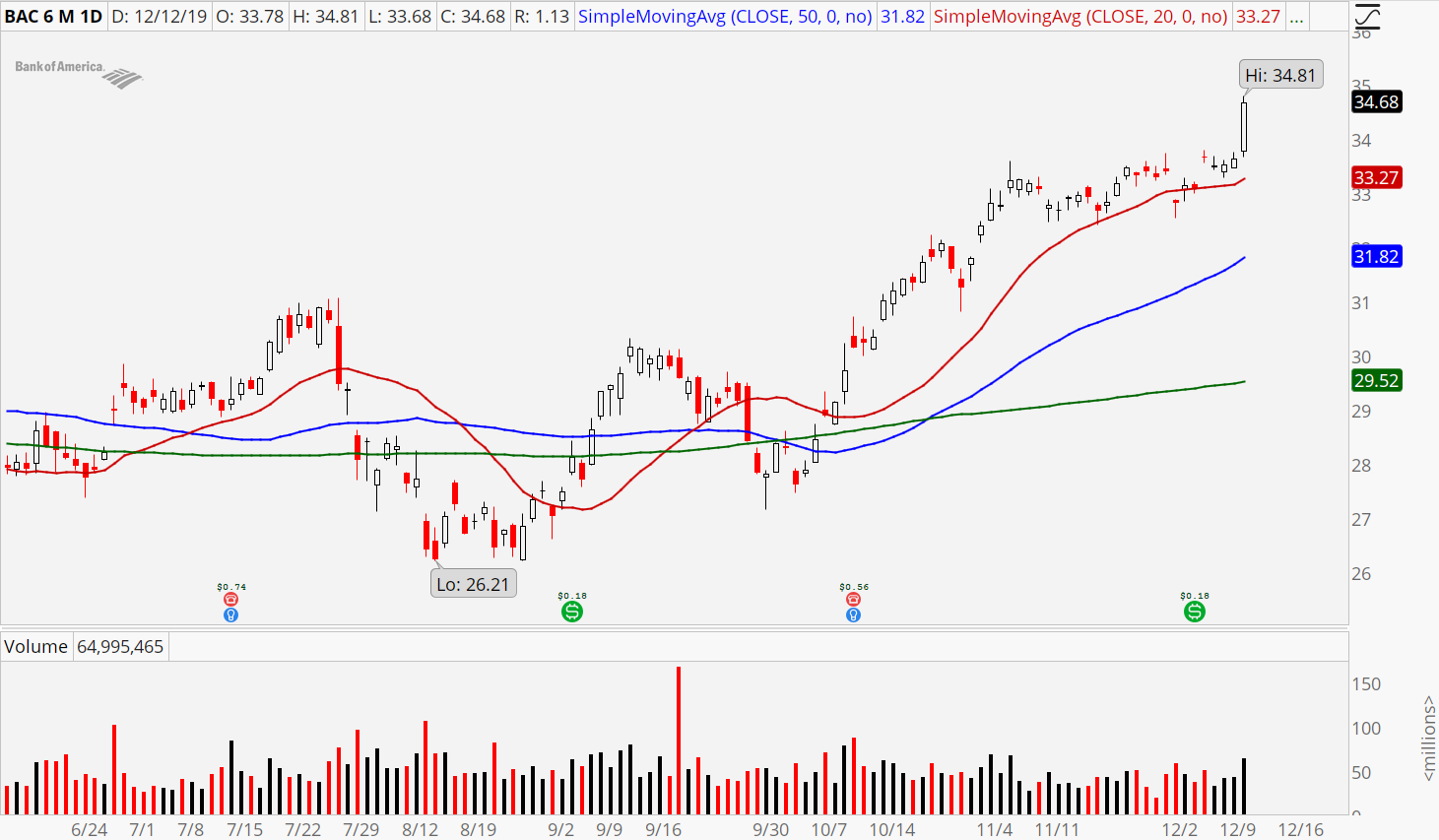 Bank of America followed JPM with a 3.1% rip of its own. And it too is climbing another 0.4% in pre-market trading. I’ll echo everything I said about JPM shares with one exception. The trend of BAC has been sleepier this year, with a trading range defining most of its behavior. As such, it hasn’t had near as many bullish opportunities as JPMorgan Chase shares.

But, boy oh boy, was yesterday’s awakening impressive. BAC stock now sits at an 11-year high and is a definite buy into any weakness. I’m not a fan of rushing into new bull trades without a pullback. The risk-reward isn’t favorable enough.

As far as the options trading goes, calls were the hot commodity on the session, driving 67% of the take. Total activity ramped to 250% of the average daily volume, with 399,452 contracts traded.

With complacency ruling the roost, implied volatility fell to 25% or the 17th percentile of its one-year range. Premiums are baking in daily moves of 55 cents or 1.6%, so set your expectations accordingly. 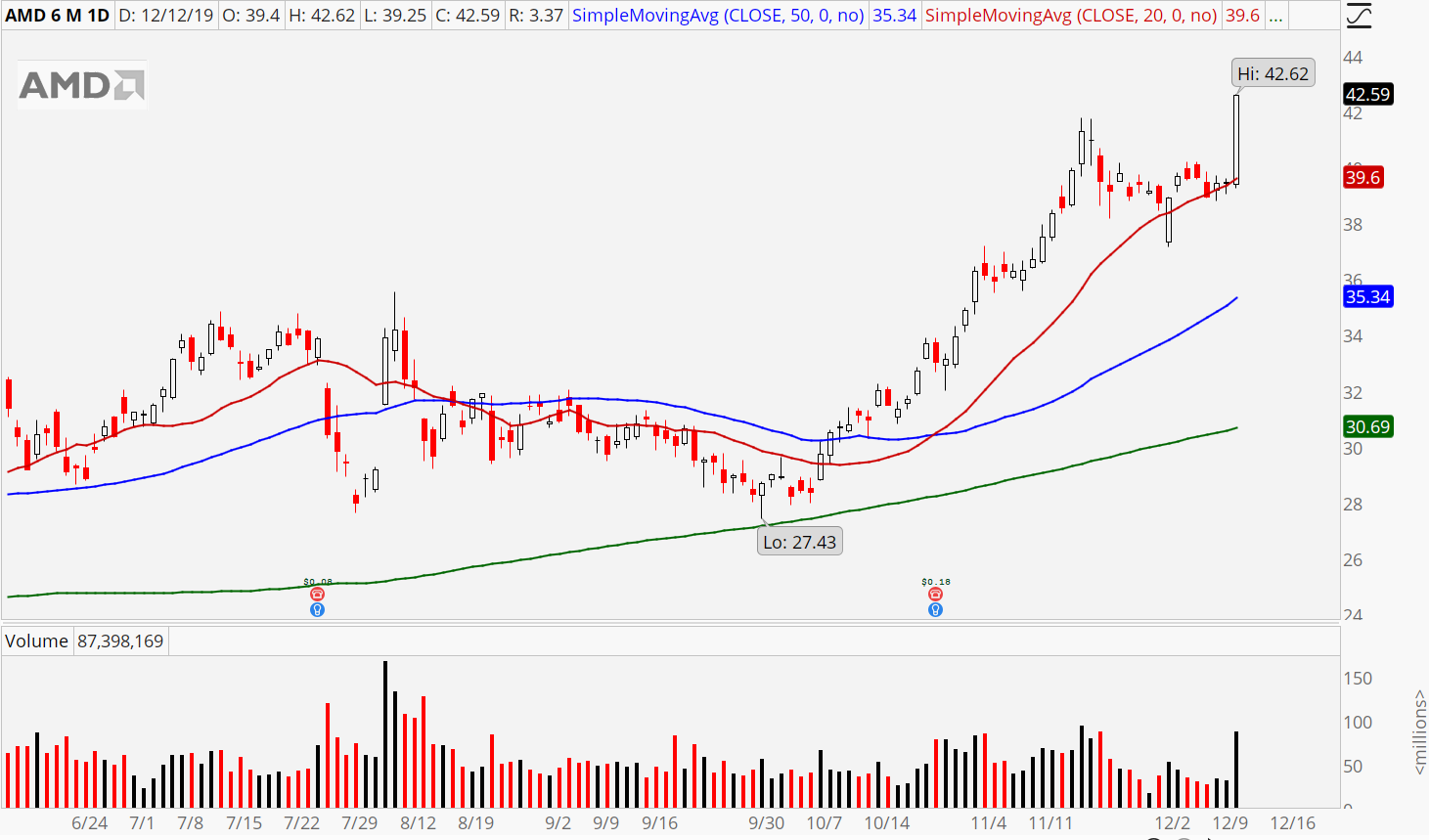 If you thought the gains in financial stocks were smoking, wait until you see semiconductors. Advanced Micro Devices led the pack, surging 8%, but it’s down 0.3% in pre-market trading. Volume rocketed to over 87 million shares on the day, reflecting massive accumulation.

AMD stock has put together quite the fourth-quarter rally. Momentum traders have been hounding the stock relentlessly, and it has reciprocated the affection.

As with virtually every other stock on Thursday, the options trading in AMD saw calls outpace puts by a wide margin. Activity spiked to over double the average daily volume, with 629,310 total contracts traded. Calls drove 67% of the session’s sum.

Complacency has driven implied volatility into the ground. At 40%, it now sits at only the 5th percentile of its one-year range. The expected daily moves have shrunk to $1.09 or 2.6%.

Like JPM and BAC, I’d suggest patience over chasing longs in AMD at these levels.

As of this writing, Tyler Craig held bullish positions in AMD. For a free trial to the best trading community on the planet and Tyler’s current home, click here!