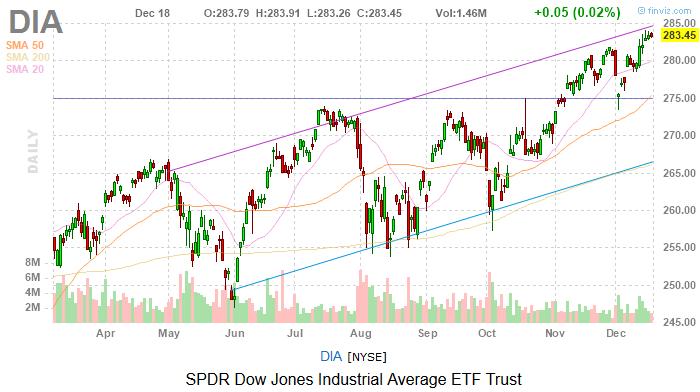 It was a slow day at the office today for equities Wednesday. In the absence of economic data, trade news, Federal Reserve musing and the other usual market catalysts, investors focused on impeachment headlines from Capitol Hill.

With impeachment taking center stage, at least for today, it can be argued that it’s surprising that stocks didn’t react poorly, subjecting investors to a volatile, down day. That obviously wasn’t the case. Markets aren’t 100% when it comes to their rate of prediction, but equities are generally seen as forward-looking, indicating that the takeaway here is that the impeachment gambit is likely to fail in the Senate.

Investors seem to feel that way while signaling President Trump stands to be reelected next year. At least those are the sentiments of respondents in a recent RBC poll. A couple of caveats here. First, obviously, there’s a long way to go between now and Election Day 2020 and plenty can happen over that time. Second, the RBC survey isn’t a political poll in the traditional sense and there were just 119 participants.

Perhaps indicating why United Healthcare (NYSE:UNH) was the second-best performer in the Dow today behind Boeing, the aforementioned RBC poll shows diminishing odds for Sen. Elizabeth Warren (D-MA) capturing her party’s nomination. Warren has been a strong backer of Medicare For All, an issued that has weighed on UNH shares this year, but in fairness to her, she has recently backed off those statements.

In late trading, just 13 of the 30 Dow stocks were higher.

Alright, so “magnificent” may be hyperbole to describe Merck’s (NYSE:MRK) 0.66% gain today, but the stock was higher on news that broke Tuesday after the close regarding the company’s bladder cancer treatment, Keytruda. The Oncologic Drugs Advisory Committee (ODAC) of the U.S. Food and Drug Administration (FDA) voted 9-4 in favor of allowing that treatment.

“The ODAC discussions were based on the supplemental Biologics License Application (sBLA), currently under priority review at the FDA, seeking approval of Keytruda monotherapy for the treatment of patients with Bacillus Calmette-Guerin (BCG)-unresponsive, high-risk, NMIBC with carcinoma in-situ (CIS) with or without papillary tumors who are ineligible for or have elected not to undergo cystectomy (removal of bladder),” according to a statement issued by Merck.

Shares of Nike (NYSE:NKE) added 0.91% today in advance of its fiscal second-quarter earnings report due out tomorrow. Nike is up more than 7% this month and Needham reiterated a “buy” rating on the stock yesterday while lifting its price target on the name to $105 from $98.

With major global sporting events such as the Summer Olympics and the UEFA European Championship, the back of half of 2020 could be big for Nike sales and its equity performance.

“Tariffs will be most impactful to fiscal Q2, we expect this headwind to gross margin eases in the second half, and expect earnings acceleration in each quarter through fiscal year 2020,” said Stifel analyst Jim Duffy in a note to clients.

As noted yesterday, Boeing is halting production of the 737 MAX jet, crimping suppliers and potentially denting the broader economy in the process. This issue is far from being cleared up, making the rebound in the stock today all the more curious.

Perhaps the rebound in Boeing stock today is attributable to news that the company’s Starliner capsule will be atop United Launch Alliance’s Atlas V rocket slated to launch into space on Friday morning.

Reportedly, this is significant because it opens the door for Boeing to send astronauts to space again from U.S. launch sites.

Goldman Going for the Gold

Goldman Sachs (NYSE:GS) has been making some appearances here over the past few days and it’s worth highlighting again today although the shares closed modestly lower.

Wells Fargo banking analyst Mike Mayo, one of the banking industry’s most noted analysts, is saying that when Goldman holds its investor day next month, the company will target a return on equity (ROE) of 13%, above the two-decade average of 12.3%.

Mayo boosted his price target on Goldman to $280 from $240 and noted that based on book value, the shares are inexpensive relative to other banking names.

With a New Year and new decade almost here, investors may want to consider the possibility that sectors that thrived in the current decade might not thrive in the 2020s. Therefore, considering some defensive ideas for the New Year might be advisable.

“After such a great run, today’s risks seem more heavily skewed to the downside,” said State Street in a recent note. “We would caution investors who may be attempting to squeeze out those last few points of return or incremental yield. It may not be worth the risk.”