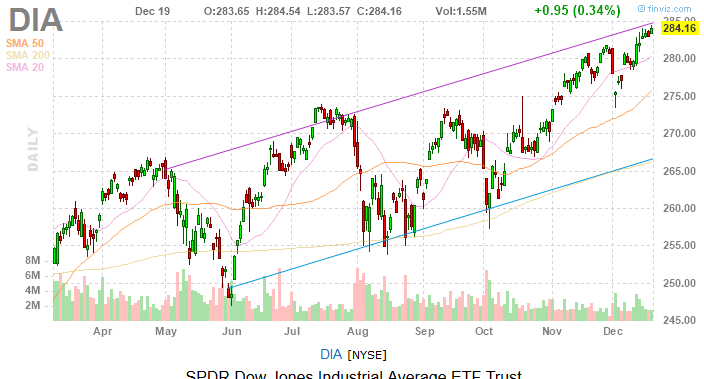 Following scant losses on Wednesday, stocks continued grinding higher Thursday with little in the way of major headlines. Impeachment continued to be in the focus while central banks in Japan and the U.K. did not alter monetary policy following recent meetings.

There have been strong data points released over the course of this week and tomorrow brings a revision to the third-quarter GDP number. However, there was one somewhat concerning data point out today — weekly jobless claims checked in at 234,000, ahead of the 225,000 claims economists expected.

The less volatile four-week moving average moved up to 226,000 from 224,000. Equities probably aren’t overreacting to these numbers because U.S. unemployment is running at 50-year lows and the employment picture can’t get too much more full than it already is.

Stocks won’t be oblivious to weak employment data for long, but in late trading today, 23 of the 30 Dow names were in the green.

Finally, A Lift For Cisco

As noted above, Cisco Systems was the Dow’s best-performing name today, snapping out of multi-month funk that had it on pace to be one of the index’s worst performers this year. Thank Barclays analyst Tim Long for the Cisco assist today as he upgraded the stock to “outperform” from “equal weight” while lifting his price target on the name to $53 from $47.

“Cisco has a diversified revenue stream, but a few key product areas should improve for Cisco and the industry over the next year,” said Long in a note to clients.

When it comes to Johnson & Johnson (NYSE:JNJ) stock in 2019, the primary issue has been the company’s various legal wranglings, be they opioid or baby powder asbestos issues. These issues are well-documented and it appears Wall Street is looking forward with JNJ, not backward.

Shares of JNJ jumped 1.24% today, good for one of the better showings in the Dow after Barclays analyst Kristen Stewart upgraded the pharmaceuticals name to “outperform” from “equal weight” while lifting her price target to $173.

“In our view, litigation concerns are more than priced in and the risk/reward is attractive,” she said in a note to clients. “We think JNJ checks a lot of boxes heading into 2020, leaving risk/reward skewed to the upside.”

Sort Of A Surprise

United Healthcare (NYSE:UNH) continued its recent bullishness though in modest fashion today. Perhaps the surprise wasn’t that the stock rose, but that its gain was small given the news flow.

The Fifth U.S. Circuit Court of Appeals ruled 2-1 to consider whether or not the Affordable Care Act (ACA), also known as Obamacare, should remain in place. The ruling essentially means there will be no big changes to the current system.

“The worst possible outcome is off the table for a while, and companies can manage their businesses more effectively over the near term,” said Jared Holz, a health-care strategist at Jefferies, said in an interview with CNBC.

Quick reminder that Nike (NYSE:NKE) is reporting fiscal second-quarter earnings today after the close. FactSet expects earnings per share to rise to 58 cents from 52 cents in the year earlier period while forecasting a sales increase to $10.09 billion, up from $9.37 billion last year. The stock inched higher today in advance of that report.

I came across an interesting Dow-specific tidbit courtesy of Barron’s today. As many of you know, the Dow is often derided compared to the S&P 500 because the former is price-weighted and holds just 30 stocks while the latter is cap-weighted and home to more than 500 names. Still, the Dow has been a winner over the past few years.

“The Dow Jones Industrial Average is 6 percentage points behind the S&P 500 index so far this year, but the often-maligned Dow is ahead during the past five years and lags only a little in the last 10,” according to Barron’s.