The pattern of bullish-leaning opens for U.S. stock futures continues this morning.

Heading into the open, futures on the Dow Jones Industrial Average and S&P 500 are higher by 0.15%. Nasdaq Composite futures have gained 0.29%.

In the options pits, call volume surged to a level that nearly doubled total put trading. Approximately 29.1 million calls traded versus only 15 million puts. Bulls have control of the market, and they’re pressing their advantage ahead of the holidays.

Interestingly, the massive disparity between calls and puts didn’t directly transfer over to the CBOE Volatility Index (VIX). The single-session equity put/call volume ratio lifted slightly to 0.54. At the same time, the 10-day moving average fell to 0.56. 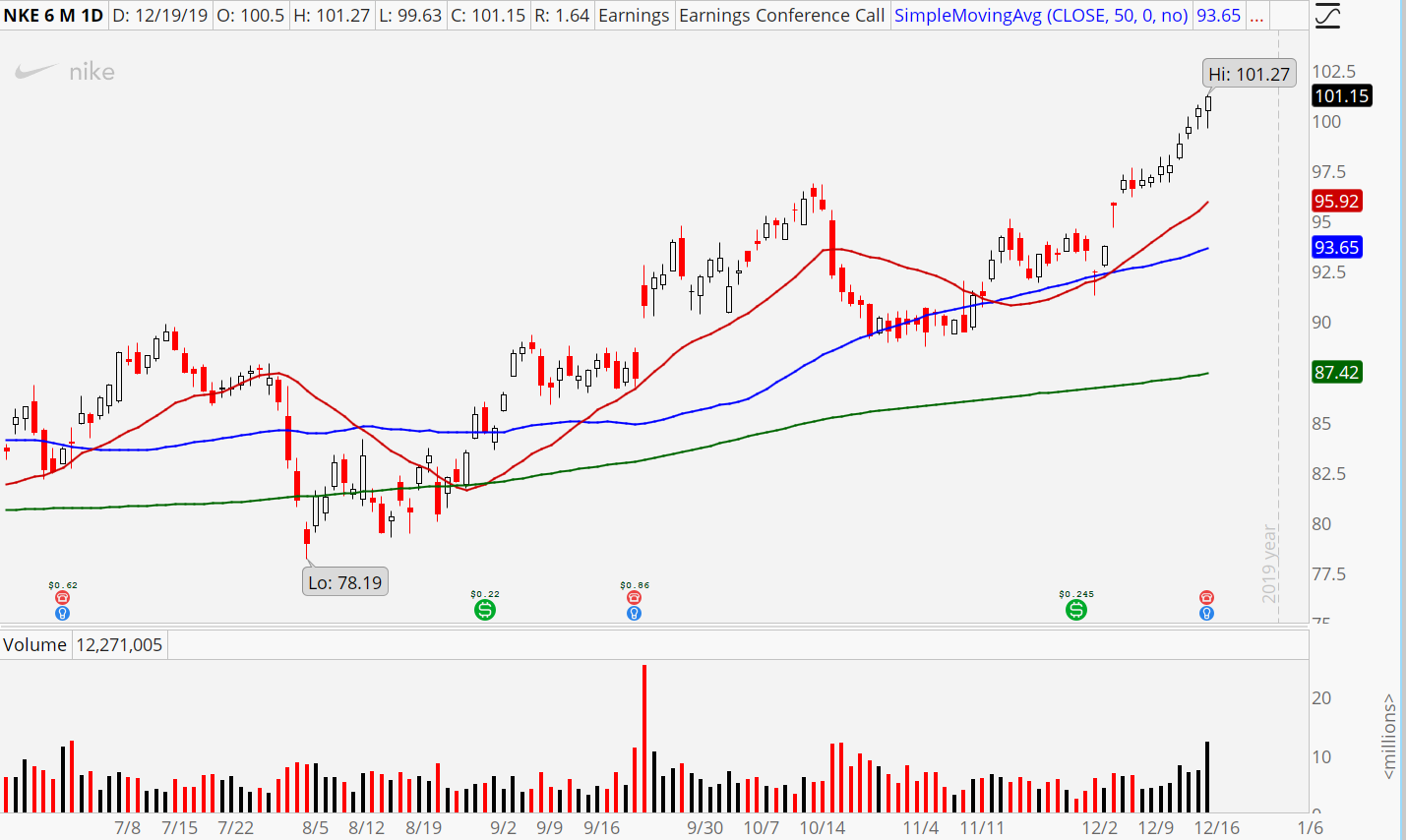 All eyes turned to Nike last night for its fiscal second-quarter earnings report. Buyers have been swarming shares of the retail giant all month long, sending it to a record high ahead of the event. The optimism was largely warranted, but a “sell the news” type reaction has NKE stock trading down 0.5% ahead of the bell.

Nike earned 70 cents per share on $10.3 billion in revenue. According to Refinitiv data, analysts were forecasting earnings of 58 cents on $10.1 billion in sales. So, chalk this up as a solid beat on both fronts.

Given the increasing momentum of NKE stock’s trend, spectators should view the weakness as a buying opportunity. All major moving averages are pointing higher, and multiple support levels loom beneath.

On the options trading front, traders loved calls on Thursday. Total activity climbed to 550% of the average daily volume, with 166,547 contracts traded. Calls accounted for 63% of the tally.

Implied volatility was at 27% or the 31st percentile of its one-year range. That translated into an expected move of 3.5% for the post-earnings gap, so this morning’s 0.5% whack is well within expectations. Look for an intense volatility crush at the open. Ideally, a multi-day retreat will form, providing a lower-risk entry for would-be buyers. 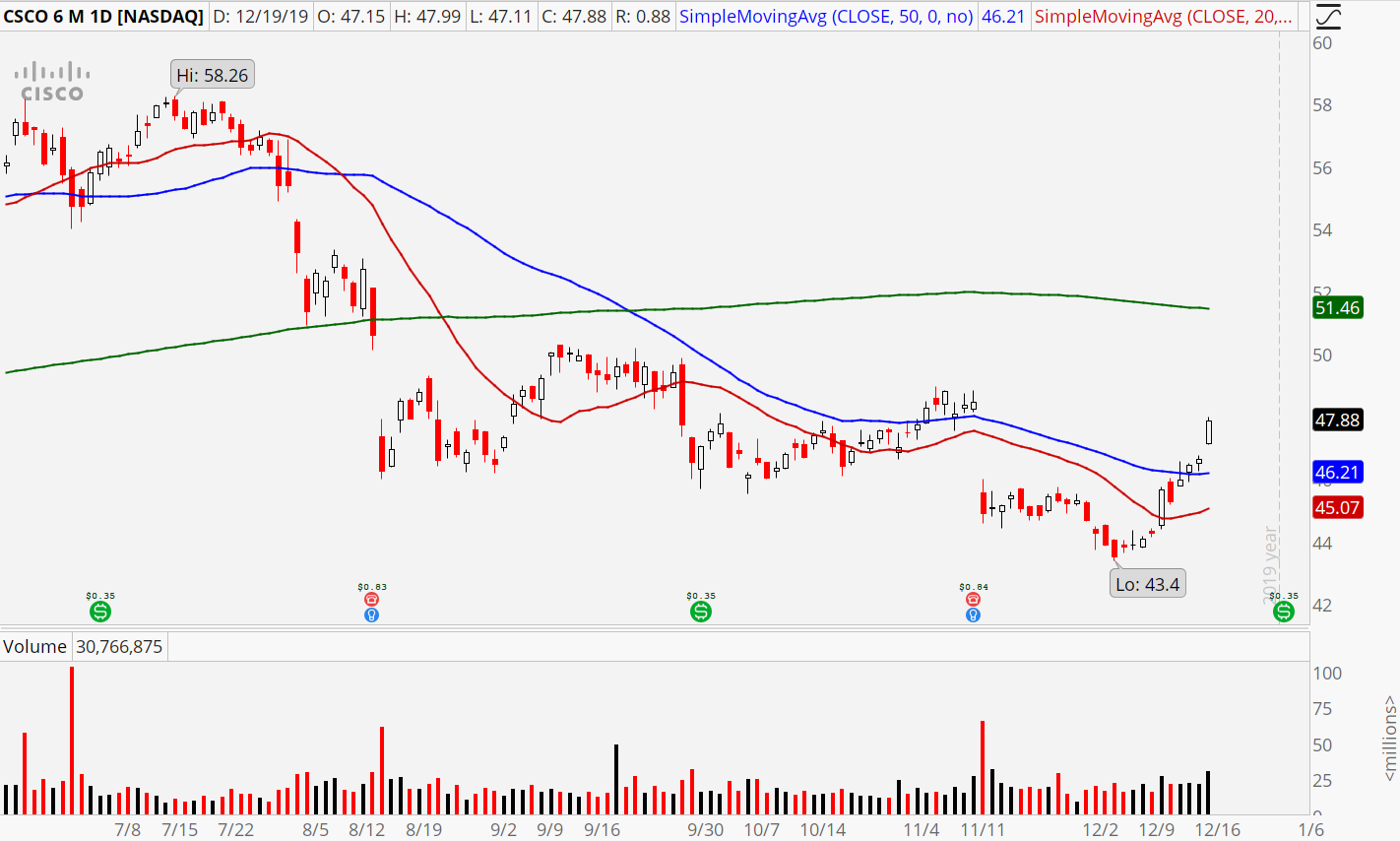 Christmas came early for Cisco Systems. The wounded technology company scored an upgrade by Barclays from “equal weight” to “overweight.” The analyst cited its recent beatdown as an opportunity to snatch up shares at lower, more attractive levels.

Buyers clung to optimism, sending CSCO stock zipping 2.7% higher to close last month’s nasty earnings gap. It’s now cruising well above the 50-day moving average and has risen enough to turn the quick-moving 20-day moving average higher. Much work remains before the intermediate and long-term trends return to bullish status, but the short-term trend is officially back in bulls’ hands.

With CSCO up nearly 10% over the past eight sessions, a pause is needed to provide lower-risk entries.

The upgrade generated a lot of interest with options traders. Calls outpaced puts by a wide margin, driving 75% of the session’s sum. Total activity climbed to 292% of the average daily volume, with 166,547 contracts changing hands.

Implied volatility sank to 21% or the 25th percentile of its one-year range. Premiums are only pricing in daily moves of 64 cents or 1.3%. If you think the bottoming bid succeeds, then short puts offer a high probability path to profits this month. 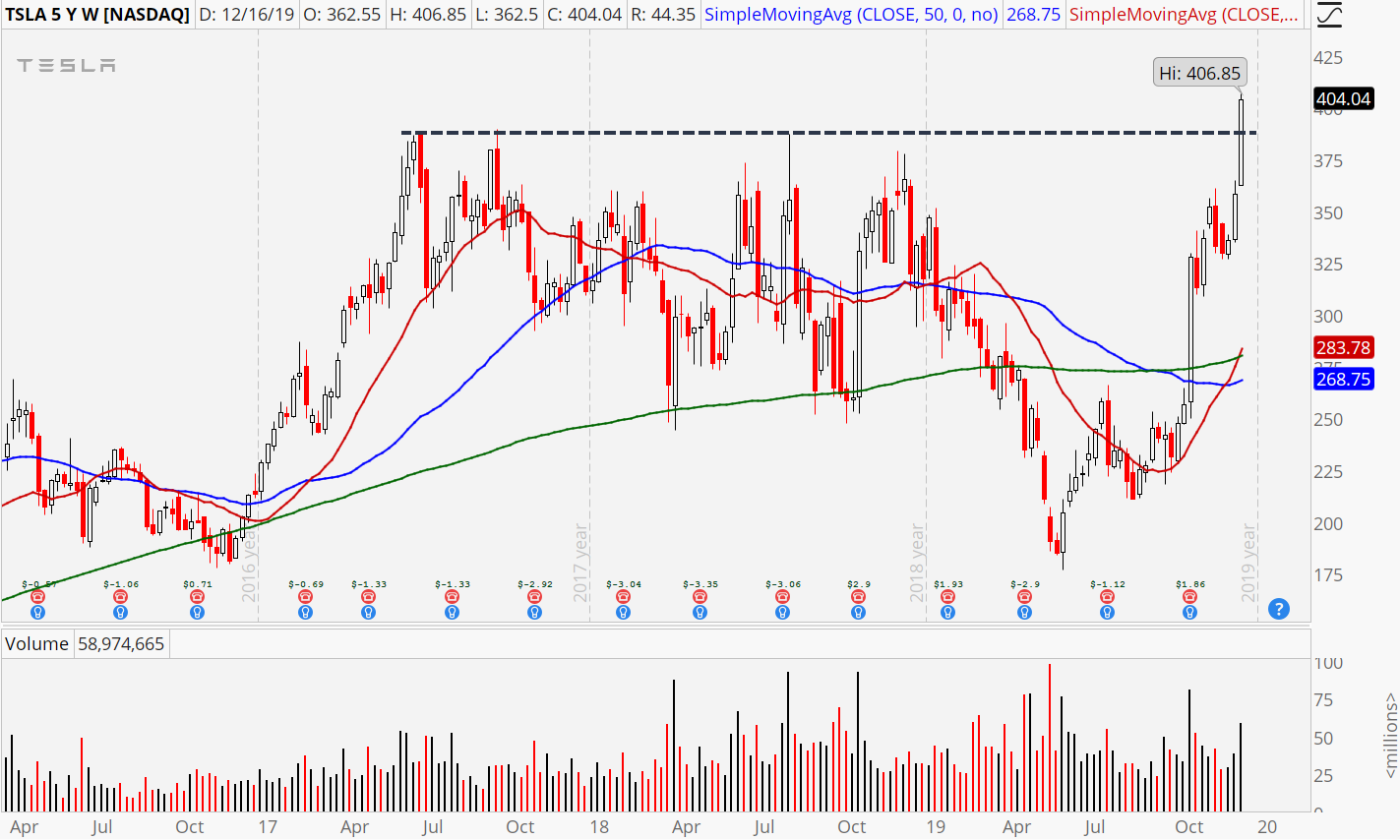 Tesla is the hottest stock on the Street this month. The momentum is massive and backed by big-league buying. This week’s rally propelled the electric carmaker’s shares to a record high, finally eclipsing resistance levels that have kept a lid on the TSLA stock for years.

Given the power behind the move, bears fade this to their peril. There’s no doubt TSLA is now reaching overbought levels, though. I’d simply rather buy weakness and go with the trend then try to bet against such a momentum-driven breakout.

The breakout created a substantial buzz in options trading. Activity pushed to 232% of the average daily volume, with 669,998 contracts traded. 58% of the trading came from call options alone.

The increased demand drove implied volatility higher on the day to 45% placing it at the 18th percentile of its one-year range. Premiums are baking in daily moves of $11.48 or 2.8%.