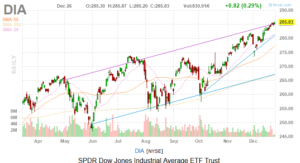 It may or may not be the remnants of a Christmas miracle or a Santa Claus rally, but stocks rallied again Thursday with leadership from technology as the Nasdaq Composite extends its winning streak to 11 days with several of the marquee tech names in the Dow Jones Industrial Average closing higher.

Although it’s a Dow component, Amazon (NASDAQ:AMZN) bears mentioning today because the e-commerce juggernaut said it shattered records for the 2019 holiday season. That’s confirmation of the strength of the U.S., a familiar theme and a major source of economic and equity market sturdiness in 2019.

For near-term traders, it’s worth noting that the last five trading days of the year, a period we’re in right now, tend to be favorable for stocks. That said, there are some near-term hurdles, including tomorrow’s oil inventories report.

In advance of that report Dow components Exxon Mobil (NYSE:XOM) and Chevron (NYSE:CVX) were in the green today, perhaps a sign traders are banking on a decline in oil supplies for the week ending Dec. 20.

Overall, it was a decent day for the Dow with 19 of 30 members of the blue-chip index pointed higher late in Thursday’s session.

In Awe of Apple

As noted above, Apple was the best-performing stock in the Dow Jones today, extending its winning streak to three days. More impressive than that streak is that this is a $1.26 trillion company that has soared more than 80% this year. For the math nerds out there, that means Apple has added more than $530 billion in market value just this year.

Buoyed by holiday demand for the AirPods and iPhone, Apple is capping its best year of equity performance in a decade and with the major 5G rollout coming in 2020, another big year could be on the horizon.

“The average price target for Apple shares stands at about $268, which implies downside of about 7% from where it has been trading,” reports Bloomberg. “Despite that, Wall Street remains broadly positive on Apple, with 28 firms recommending investors buy the stock. To compare, 14 firms have neutral ratings, while seven advocate selling.”

This is the time of year when some investors start examining the dogs of the Dow to unearth redemption stories for the new year. Pfizer (NYSE:PFE) definitely merits a place in that conversation. The stock has been a laggard, as have many healthcare names, this year, but has the potential to reward investors in 2020.

Next year could be a pivotal one for Pfizer investors because the company faces a major patent dropoff in 2026. Between 2020 and 2026, new product launches and sales increases are integral to bolster the long-term case for the stock.

“Pfizer says it can grow sales by 6% a year over the next five years. Key tests for the company come in 2020, when investors expect data on a promising new indication for the company’s cancer drug Ibrance, among others,” reports Barron’s.

Underscoring the point about consumer spending this holiday season, JPMorgan Chase (NYSE:JPM) and Visa (NYSE:V) were among the Dow’s better performers today not named Apple. Banks are benefiting from the buoyant economy and strong consumer data. Those themes matriculate over to Visa, too, as more credit and debit card swipes are good news for that stock.

With the Federal Reserve likely to hold off on interest rate cuts for several more months and with market participants looking for value plays, bank stocks like JPM could extend upside into the early part of 2020.

Saying no to Cannabis

Shares of Coca-Cola (NYSE:KO) closed modestly higher after the company said it doesn’t have plans to get into the cannabis market. Speculation to that effect when a YouTube user posted a video of a Coke can with a childproof lid, saying it was a prototype for a cannabis-infused product the company is working.

The posted of the since deleted video said his father works for Coca-Cola, prompting the company to say it’s not eyeing the cannabis market.

At this point, it’s certainly becoming riskier to bet against stock, particularly with headline risk diminishing.

“Investors have been adding more risk after the U.S. and China announced they have reached a phase one trade agreement earlier this month. The two countries are in the process of translating the deal, aiming to sign it in early January,” according to CNBC.

Not to rain on anyone’s parade, but there could be some risk heading in January with Apple reporting earnings and the same being true for a slew of consumer discretionary companies. That will bring updates on just how good holiday shopping was. Remember, current data isn’t factoring in returns. Just something to keep in mind.