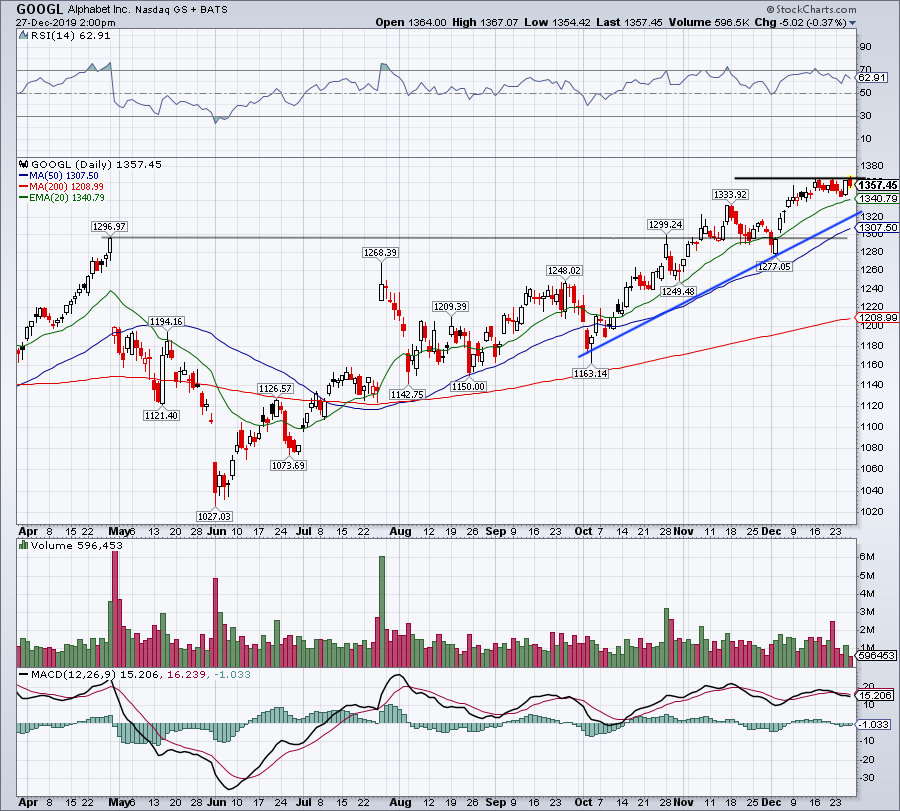 Is the market finally running out of gas? While we saw new highs in the market on Friday, bulls struggled to keep the indices higher throughout the session. Let’s look at a few top stock trades going into the last few days of 2019. 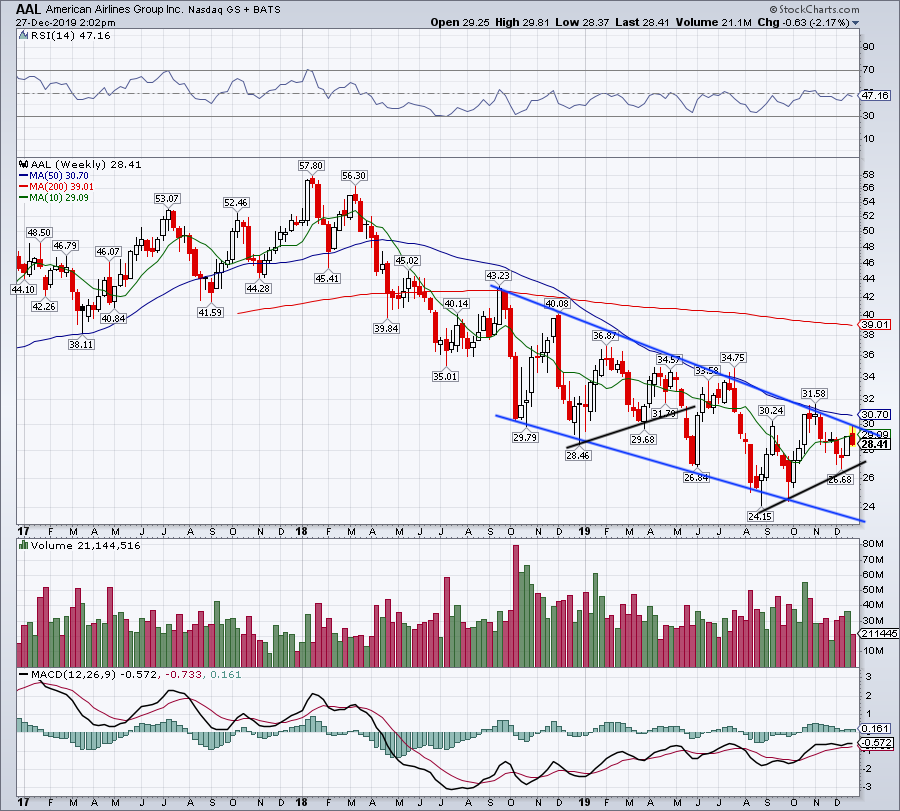 Oof. That’s all that can be said about American Airlines (NYSE:AAL) stock over the past few years. The stock continues to put in a series of lower highs, as sellers bully the price lower and lower.

On the plus side though, AAL stock put in a lower high in recent months. Shares are getting hit on Friday to the tune of 4%, so it’s not all good news. Still though, if American Airlines can put in another higher low — riding uptrend support (black line) higher — then bulls may get a breakout in 2020.

Should uptrend support fail, it puts $25.50 on the table, as well as downtrend support well below $24. Over downtrend resistance and the 50-week moving average, and AAL can garner some upside momentum. 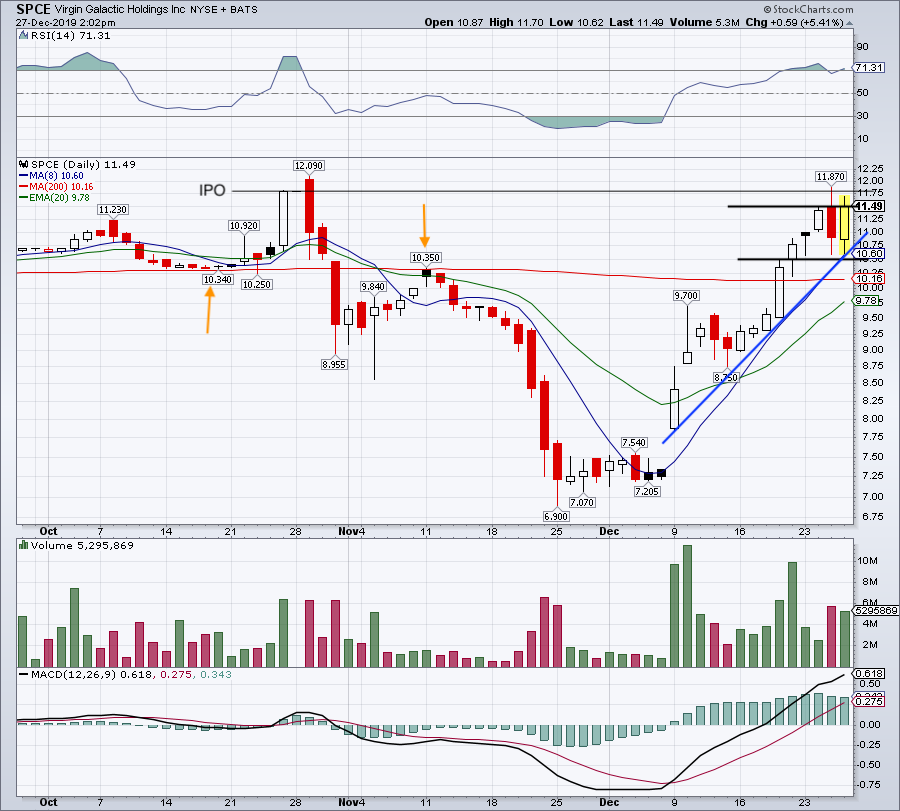 Virgin Galactic (NYSE:SPCE) officially came public about two months ago, but it has not received a very warm welcome. However, that’s starting to change.

After bottoming at $6.90 and finding its footing in the low-$7s, SPCE stock is looking better. Now consolidating between $10.50 and $11.50, traders are looking for a break of either level.

A breakout over resistance signals to bulls that more upside could be on the way, particularly if the stock can clear the post-IPO high of $12.09. A breakdown could send SPCE to its 200-day moving average. Should bulls fail to buoy it, sellers could knock it down to single digits. 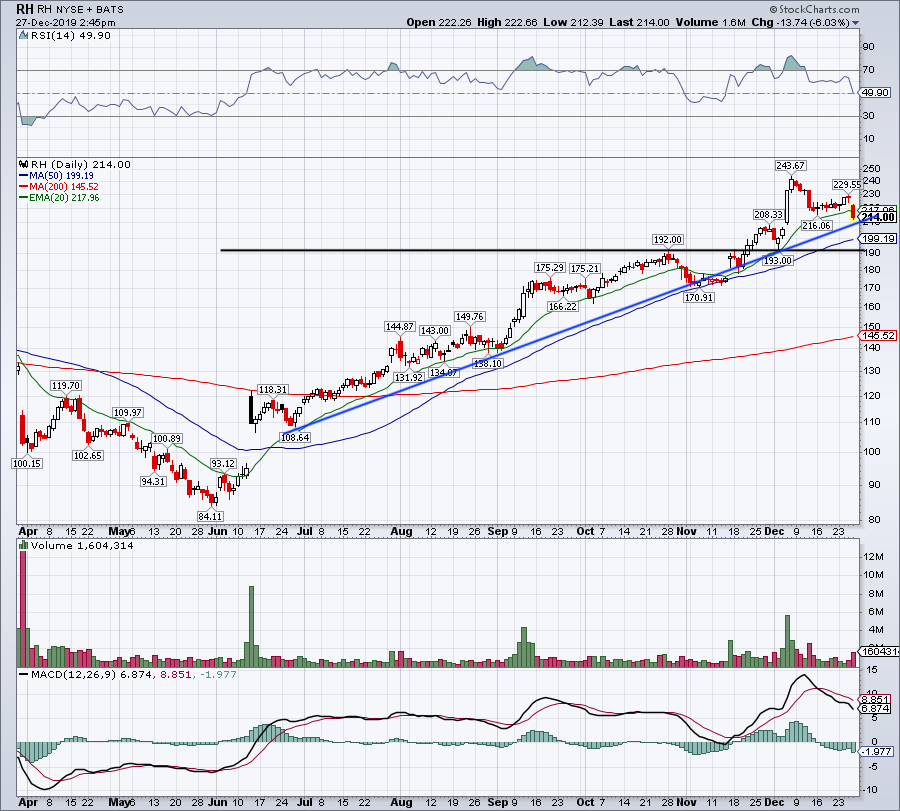 Formerly known as Restoration Hardware, RH Inc (NYSE:RH) has been on fire this year. Earnings are routinely better than -expected and a Warren Buffett investment has bulls feeling good.

That said, shares are slipping Friday, down more than 6% at one point. I would love to see bulls make a stand in this $210 area. There it has uptrend support (blue line), as well as the earnings gap-up level from earlier this month.

Below that and RH may need more time to digest this year’s gains. See if the 50-day moving average supports the stock in that case. If not, a retest of the $192.50 breakout area could be in order.