U.S. stock futures are pushing higher this morning in an attempt to recapture their magic after Friday’s drop hit the pause button on the market rally.

Heading into the open, futures on the Dow Jones Industrial Average are up 0.1% and S&P 500 futures are higher by 0.14%. Nasdaq Composite futures have added 0.07%.

In the options pits, the pattern of heavy call volume continued on Friday. By day’s end, some 19.8 million calls changed hands compared to only 13.5 million puts. We continue to see mass complacency keep put buying to a minimum.

That said, the CBOE Volatility Index (VIX) single-session equity put/call volume ratio did snap back after Thursday’s super low reading. The metric popped to 0.60, pulling the 10-day moving average higher in the process. It ended the day at 0.53. 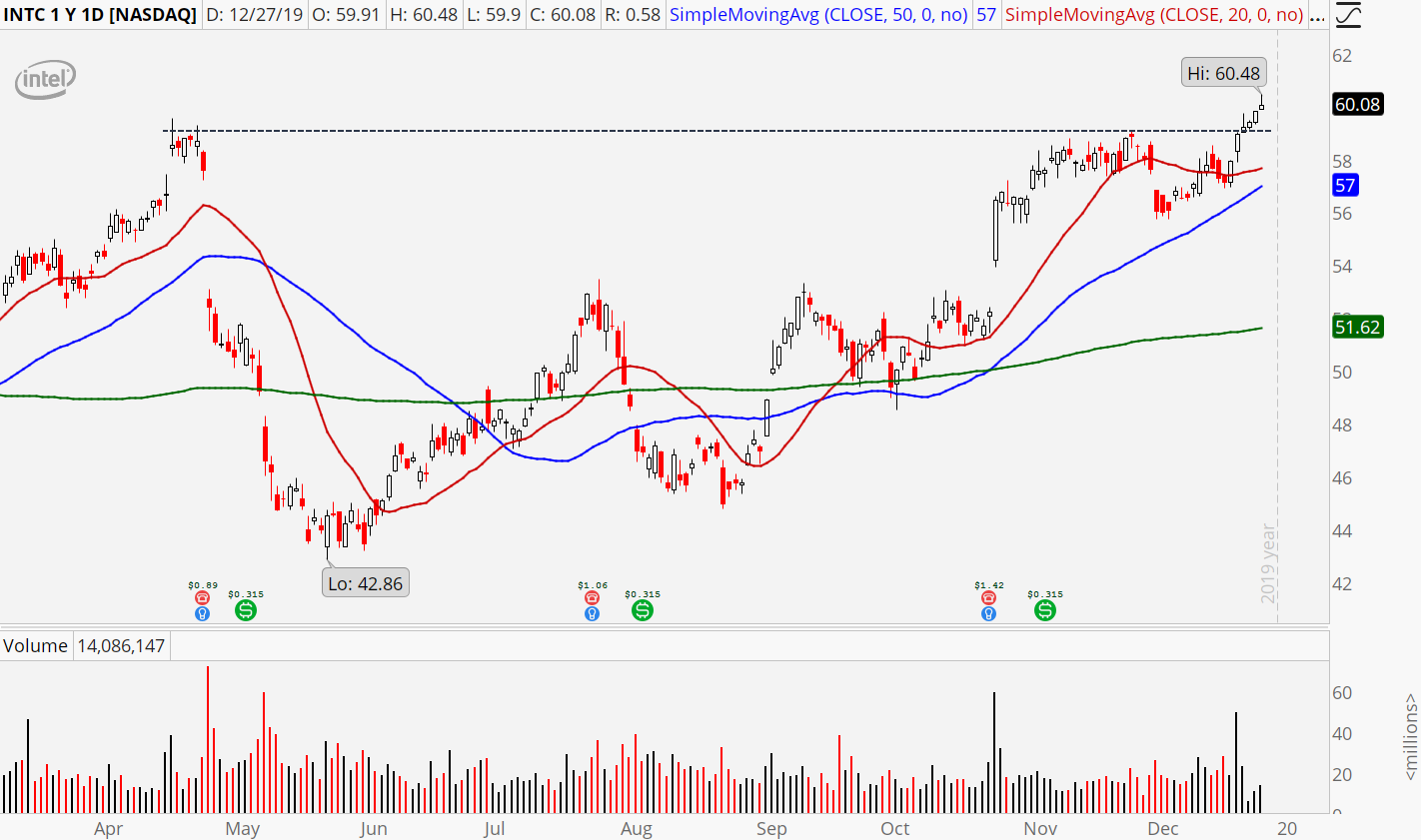 The Nasdaq topped 9,000 for the first time in history, grabbing headlines everywhere last week. Large-capitalization tech stocks have been booming, but semiconductor companies have also contributed to the rise. High-octane players like Advanced Micro Devices (NASDAQ:AMD) and Micron (NASDAQ:MU) receive the most attention, but Intel has been a big winner of late as well.

Friday’s gains extended INTC stock’s rally to a sixth day in a row. And, it brings the chip giant’s 2019 year-to-date gains to an impressive 28%. Its price chart is trending above rising 20-day, 50-day and 200-day moving averages. Last week’s surge created a breakout of the $59 resistance level. Accumulation days are multiplying, and momentum is increasing, giving spectators all the ammunition needed to build a bullish case.

Options trading saw a large uptick in call activity. Total activity swelled to 121% of the average daily volume, with 82,967 contracts traded. 68% of the trading came from call options alone.

Implied volatility rallied all last week and ended at 25% or the 25th percentile of its one-year range. It will likely continue trekking higher in preparation for January’s earnings report. Right now, premiums are pricing in daily moves of 93 cents, so set your targets accordingly.

The Trade: If you think INTC remains aloft through earnings, then sell the Feb $55/$50 bull put spread for 56 cents. Snap shares set a blistering pace over the first half of the year, tripling by August. But the hot social media star has since cooled, settling in a range to digest the enormous gains. While the subsequent selling has seen SNAP stock breach the 50-day and 20-day moving averages, buyers have successfully defended the 200-day three times this quarter.

And last week they finally pressed their advantage.

Thursday’s breakout cleared resistance at $15.75, setting the stage for a potential squeeze higher. The $18 level is a logical next target. With the trend across time frames now back to pointing higher, bullish trades are attractive once again.

Options traders certainly took note of the breakout. Call volume outpaced puts by a mile, driving 73% of the session’s sum. Total activity inched up to 113% of the average daily volume, with 97,382 contracts traded.

Implied volatility ticked up to 50% or the 12th percentile of its one-year range. That translates into daily expected moves of 51 cents or 3.2%. Though the rank is low, the absolute level of implied volatility is juicy enough to make naked puts interesting. 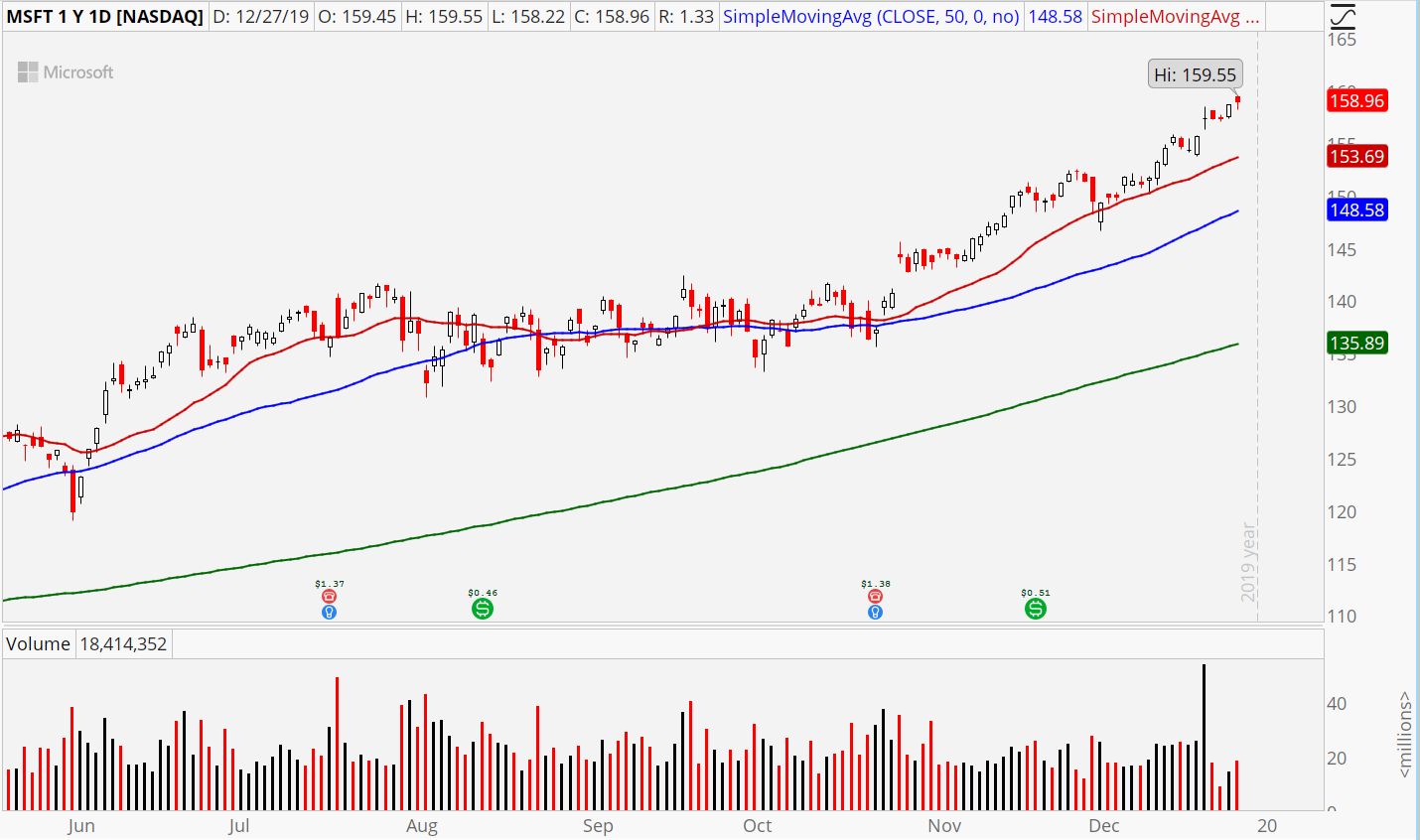 The price action for Microsoft shares was subdued on Friday, but that didn’t prevent options traders from chasing enough calls to land the software behemoth atop the leaderboard. With the fourth-quarter ramp carrying MSFT stock to the moon, 2019 will go into the history books as a banner year. At 57%, the year-to-date gain is well above every index.

MSFT has made frequent appearances on the most-active options list this month. My commentary today will echo that of previous mentions. As with virtually all stocks perched at record highs, Microsoft checks every bullish box. Trend, momentum, volume patterns — you name it. They’re all flashing green lights. The single challenging thing about its price trend is the overbought pressures that have cropped up. This is not a low-risk entry, so waiting for a few down days before piling in could be smart.

On the options trading front, traders favored calls over puts. Activity rose to 113% of the average daily volume, with 166,394 total contracts crossing the tables. Calls added 67% to the day’s take.

The increased demand drove implied volatility up to 20%. It’s still low though, at the 12th percentile of its one-year range. The expected daily move is just shy of $2 or 1.3%.